I have consulted a book by Mark Fox on Optical Properties of Solids, and it states:

" The absorption of a photon by an inter-band transition in a semiconductor or insulator creates an electron in the conduction band and hole in the valence band. The oppositely charged particles are created at the same point in space and can attract each other through their mutual Coulomb interaction... Moreover, if the conditions are satisfied, a bound electron-hole pair can be formed. This neutral bond pair is called an exciton."

My understanding is - We first need to supply E > Eg for excitons to form. Once excitons exist in a material, they facilitate the absorption of photons with E < Eg, specifically at energies corresponding to n=2, n=3 etc. If the material has not been initially supplied with photons of E > Eg, with the material containing no excitons then why do we see an additional absorption response (red lines in figure below) apart from the alpha ~ sqrt(Eg) response we normally observe? I'm confused because I saw spectra such as one below, I don't expect to see absorption below the band gap - we aren't supplying Eg for excitons to form.

I thought that the idea of a spectra is that you provide photons energy from 0 eV to final energy value greater than Eg, starting from low energy and sweep into higher energies. 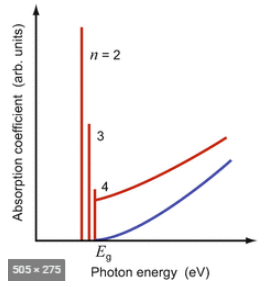 An important thing to keep in mind when talking about excitons is that they are not really hydrogen-like entities formed of real particles, but many-body excitations, i.e. collective behavior of many electrons.

Indeed, the concepts like free electron in a semiconductor, hole and exciton are useful to guide our thinking and often function as good approximations when doing calculations. However, they do not fully reflect the reality: the electrons in a valence band are strongly interacting with each other, and when we speak of a hole we really mean an excitation of this many-particle electron system which, in some respects, behaves as if it were a free particle (with renormalized mass, finite lifetime, etc.) Similarly, a free electron in the conduction band continues to interact with those in the valence band, and is not really a free electron, but also an excitation of this many-body system.

Of course, electrons and holes can be excited only in pairs, and it turns out that some of such pairwise excitations have energies below the gap edge, $E_g$, which is what we call exciton. Such excitations would not exist, if electrons and hole were truly non-interacting particles. However, treating them as a bound state of non-interacting particles produces surprisingly correct predictions, e.g., for their energies.

This idea that in some cases behavior of many-particle system can be represented as that of non-interacting particles is somewhat similar to the concept of Fermi liquid in metals.

A consistent treatment of how the excitons and their hydrogen-like description come about from many-body band structure calculations can be found in the "Theory of Excitons" by Knox.

Not the answer you're looking for? Browse other questions tagged solid-state-physics absorption or ask your own question.

18
How similar are phonons and photons?
1
Energy of exciton formation in semiconductors

2
What's the difference between an exciton and a geminate pair?
2
Why is the exciton binding energy slightly smaller than the band gap energy?
2
Existence of exciton and the (partial) failure of band theory
1
Optical selection rules for singlet and triplet excitons
1
How do electrons ever receive the amount of energy needed to move up energy levels?
2
Electrons involved in bonding cannot be involved in conduction?
2
Does solar cells absorb sub-bandgap photons?
1
Energy of exciton formation in semiconductors