Is there jerk on Uniform Circular Motion? [duplicate]

I was reading my textbook and I encountered a section where it explains that Centripetal Acceleration is not constant, thus, I wonder if jerk exists in Uniform Circular Motion? The textbook states that it happens due to the continuous change on the vector's direction. So, pretty much. Does jerk manifest? or, if it does not, why?

I'm not entirely sure what you mean by "manifest" though. It's simply something that can be measured.

As other answers and comments said, yes there is jerk. But it doesn't mean what you think. In everyday use, a jerk is a sudden acceleration, like a sudden yank on a rope. That is not what centripetal acceleration is like.

If you tie a rope to a rock and swing it around your head, you must pull on the rope to keep it moving in a circle. That is centripetal force and centripetal acceleration. If the rock is circling at a constant radius and speed, the magnitude of the force does not change. The direction smoothly changes. You have to keep pulling toward yourself as the rock moves around you.

The other answers about jerk, snap, crackle, and pop are apparently technical terms for higher derivatives of velocity. Though I had never heard of them before this question. They are not in common use. And these technical definitions do not imply sudden accelerations either.

Suppose you are pulling with constant force on a rope, trying to move a stuck object. You give the rope a yank. The force momentarily rises and then returns to its former value. The derivative of force reasonably fits the idea of jerking the rope, even if the object is still stuck. If the object breaks free and there is a non-zero acceleration, then the derivative of acceleration also reasonably fits the idea.

Jerk is a non-zero vector in uniform circular motion. But the motion does not fit the everyday idea of jerking the rope.

Others have explained it well, but I wanted to add another point.

When I first read your question I thought "It's easy to keep your head steady on a carnival ride shown below, so there must be zero jerk". In this case, I think your body has zero jerk in the rotating reference frame centered at the ride's axis. In other words, since your body is rotating along with the reference frame, you don't feel the jerk. 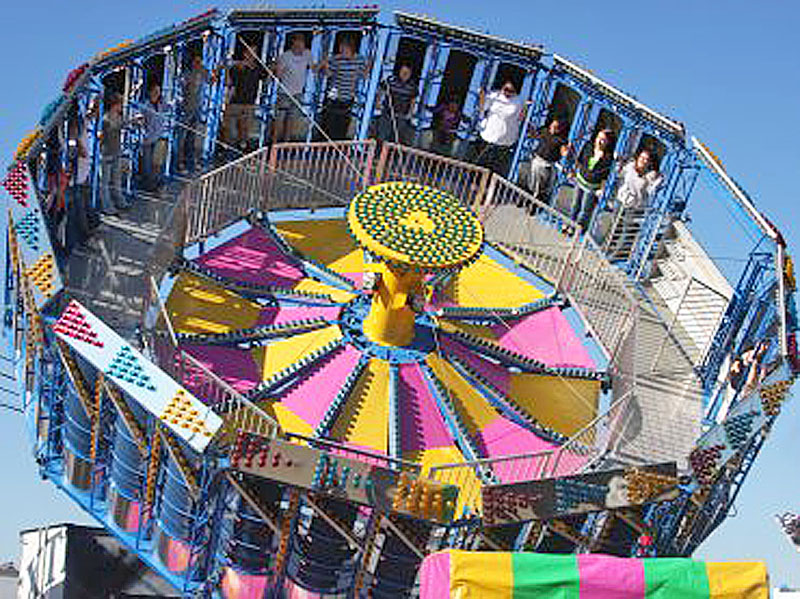 Not the answer you're looking for? Browse other questions tagged newtonian-mechanics kinematics centripetal-force jerk or ask your own question.

1
Jerk and Snap in Circular Motion