What is the relationship between pressure and displacement of a sound wave in a tube?

I am currently studying out of Vibrations and Waves by AP French. I have been trying to solve this problem but seem to be having trouble deriving mathematical equations for it: 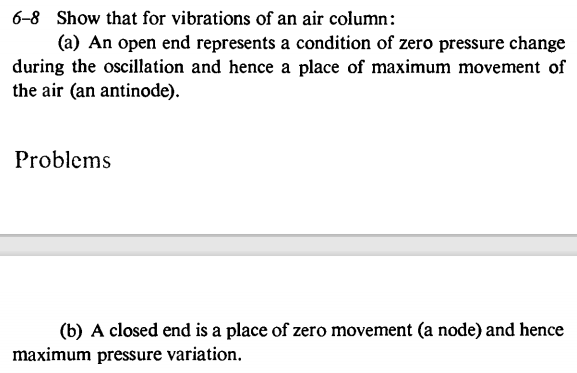 I have a qualitative understand about certain parts of the question that I will explain shortly, but is there any law that I can use to relate pressure of the gas in the tube and the displacement of a particle in the tube during an oscillation?

Here is my qualitative understanding of the question:

For part a, if particles were not at the same pressure as the pressure of the surrounding medium, particles would naturally flow with the concentration gradient until the concentration of air particles at the open end of the tube would be about the same as the pressure of the surroundings. This won't be exactly the same (I think due to oscillations still occurring, so the gas at the end of the tube won't always be exactly the same pressure of the outside medium at any given time), but it will be relatively close. I'm not exactly sure why this would result in a maximum movement of air, though.

For part b I have a better understanding I believe. Particles would collect at the end of the tube due to there being a physical barrier over which particles cannot cross, and thus we would have a node where particles must stop their motion going towards the barrier and turn around in the opposite direction. Because particles must stop at the barrier, the concentration of particles must change from very high (in comparison to other non-mode spots in the tube) to very low (in comparison, again, to other non-node spots in the tube) over time. Thus we would have a maximum pressure variation at this nodes.

Is this intuition correct, and if not, how can I remedy this (hopefully with some mathematics)? Thank you for any help you can offer!

Suppose that, because of the wave, the gas at $x$ moves forward by $\xi$, and the gas at $x+\Delta x$ moves forward by $\xi + \frac{d\xi}{dx}\Delta x$. So the increase in volume of the gas that had volume $V$ will be $$\Delta V =A\frac{d\xi}{dx}\Delta x=V\frac{d\xi}{dx}$$ So substituting in our equation for adiabatic changes, $$\Delta p=-\gamma p \frac{d\xi}{dx}$$ So the pressure change at a point due to the sound wave is proportional to the gradient of the displacement due to the sound wave. This applies at any instant, but since pressure differences will cause accelerations, $\Delta p$ and $\xi$ will also depend on time, so we ought to write $$\Delta p=-\gamma p\frac{\partial\xi}{\partial x}$$

You can, for example, substitute a sinusoidal variation of displacement with distance and derive the pressure change as a function of distance.

Not the answer you're looking for? Browse other questions tagged waves pressure acoustics or ask your own question.

3
What is the pressure at the top of a sealed tube being drawn out of water?
4
Why is root mean square pressure used in the definition of sound pressure level?
13
Pressure standing wave nodes at the end of the open side of a tube
4
Why, in an open or half-open pipe, must an open end of a standing sound wave have a pressure of zero?
2
How are sound waves produced?
4
Pressure variation in a sound wave
0
Will Air pressure sensor (that is closing one end of a hollow tube) give same reading irrespective of length of tube given same pressure applied?