Can two perpendicular beams cancel each other out?

This question is related to the Michelson-Morley experiment. See below an illustration of the setup: 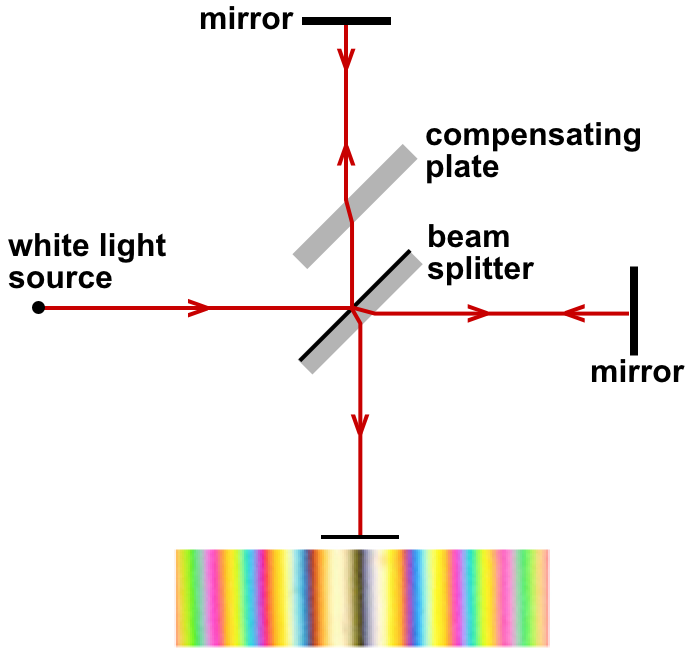 When looking at this image, I am wondering where and how exactly the interference occurs. Is it only at the intersection point, or are the two beams cancelling each other out when travelling back together in the same parallel direction?

Let me put it another way: Assume you have two beams of light polarised in the same direction, and travelling at perpendicular paths. Is it then possible to cancel out the two beams, so that the beams will not go further than the intersection where they met?

I would actually expect the two interfering with each other at the crossing point, but then continue their paths with their amplitudes unchanged. However then, two beams that travel parallel like at the last stage of the Michelson-Morley experiment, even with a phase shift where they cancel each other out, because you can never have two rays be perfectly 100% parallel to each other, over a long enough distance you would suddenly start seeing two beams again. (When they are apart far enough to stop interfering with each other.) Which seems strange, because that would seem like out of nothing two beams would appear...

Interference of light waves occurs at each point in space, not along a direction. Interference patterns are three dimensional and the pattern seen on the screen is only a two dimensional cross section of the full pattern.

Light interference has little to do with rays; it has a lot to do with local intensity of a light field. Here are some general principles (for linear optics) that might be helpful:

So, in response to each part of your question:

NOTE: The above statements are only strictly true for linear optics. In the case on nonlinear optics, where the medium interacts with light by changing its refractive index or other optical properties in response to light intensity, then some very strange and useful things can happen.

Not the answer you're looking for? Browse other questions tagged optics interference superposition or ask your own question.

6
Recently publicized experiment on destructive interference between two laser beams
6
Will overlapping two different beams of coherent light cause interference?
3
How can unpolarised light be produced from 2 beams with orthogonal polarisation?
4
What does it mean to say that two optical systems are equivalent to each other?
1
Can two weak coherent EM beams arriving from different positions cancel out at a meeting point?
0
If the number of cycles is the same, or differs by an integral number of cycles, then the two beams of light will arrive at the same phase
0
Minimum distance for two parallel beam to interfere effectively