In Figure 1 below, Particle 1 has a velocity to the right and is experiencing a constant force. Particle 2 travels unaccelerated at 10 mps.

In Figure 2 both particles reach points A and B at the same instant in time and the velocities are identical at 10 mps. Particle 1 is experiencing a velocity changing force while Particle 2 experiences no force. 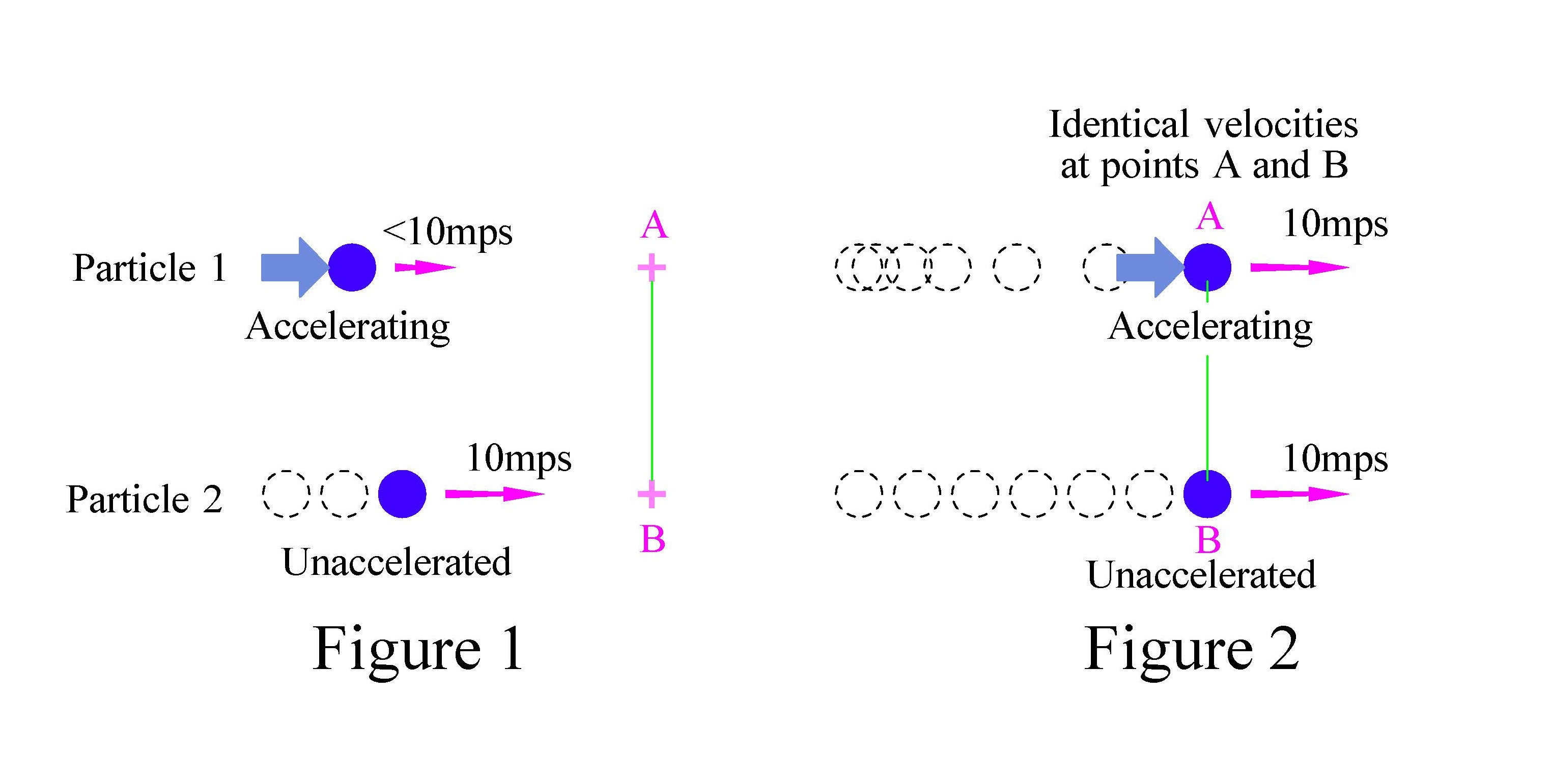 When you throw a ball straight up it slows until reaching its apex of travel where for an instant in time there is no velocity. We know it is transitioning from a positive velocity to a negative velocity (relative to earth) but our perception is that there is a pause in the ball’s motion.

If at that instant the ball - with no velocity relative to earth - was experiencing no gravity then it would not move going forward in time. I think that since there is gravitational acceleration at that instant, the ball will move toward earth no matter what at any instant in time later. Math says we can remove the force at that instant and the ball stays put but logic says otherwise.

If we are to believe that the math describes the physics then how could we have, in the two examples, a stationary ball with an applied force and a stationary ball without a force and both having the same results of no velocity at any instant later? This tells me that acceleration is a quantity of motion just as velocity, at any instant in time. That means Particles 1 and 2, though having identical velocities, are not in the same state of motion at points A and B.

The key to showing why they behave the same is calculus.

Infinitesimals are a pest. Its really easy to try to make sense of them one way and then find that you generated a contradiction (such as having a force and no force at the same time). They gave us trouble for thousands of years. Newton and Leibnitz's calculus is the tool we use to resolve them. It was the first method of calculating using infinitesimals which didn't generate horrible contradictions.

Using calculus, we can see that the two ball's states are equal after the time t except that one had a force applied to it for the infinitesimal amount of time between $t$ and $t+dt$. When you run math using calculus, you find that the effect of applying a finite force for an infinitesimal amount of time is 0. So thus, if ball $A$ is traveling at $v_a$, ball $B$ is traveling at $v_a + 0$, which of course equals $v_a$. That little infinitesimal difference doesn't matter once you integrate it.

Indeed, the astonishing beauty of calculus is that it can handle these individual, isolated infinitesimal differences and say "they have 0 effect," and yet not write yourself into a corner where you're forced to say "because I can split up any motion into infinitesimally small pieces, and infinitesimally small pieces have no effect, there is no motion." This would be Zeno's most famous paradox. The precise wording of calculus lets us resolve this paradox.

Now there's two caveats to this which are probably useful going forward.

The state of motion of an object is defined by its velocity. See the following:

I believe you need to further clarify the last paragraph to enable a complete answer to your post.

In any case, to the extent possible, hope this helps.

in the moment, both particles have the same velocity it is of cause the same, for example if both were cars of the same mass they would cause the same damage in a collision. What is different is not the velocity, but the acceleration. So if you compare at the same moment and in in this moment the acceleration stops both continue with 10mps.But for many people the idea of a velocity in a moment is hard to grasp, if the velocity is changing continuously, since you could not measure it, to me measure a velocity, you have to have an interval of time.

Not the answer you're looking for? Browse other questions tagged newtonian-mechanics forces acceleration velocity or ask your own question.

2
Kinematics with non constant acceleration
0
Newton's Third Law and Constant Velocity
2
instantaneous velocity center
0
Why can internal forces be disregarded considering the motion of the center of mass of the system?
3
Why doesn't the magnitude of velocity of an object in circular motion increase?
1
Velocity of particle due to acceleration. Special relativity