What does the orbit of Pluto look like from the perspective of Neptune?

Pluto is locked in 3:2 resonance with Neptune, so that means that it should be possible to generate a simple looping animation that shows what movements Pluto would make given 2 orbits of Neptune.

I can find some animations of Pluto's orbit, but none that show Neptune locked in Position

Wikipedia has a similar animation for Haumea's orbit with Neptune locked in position:

What does Pluto's orbit look like with Neptune locked?

I found this: orbitsimulator.com/gravity/articles/pluto.html But it doesn't explain the time scale, and implies that it isn't in medium term 3:2 resonance, which contradicts a lot of what I've read elsewhere.

Wikipedia's has a decent article on Plutinos, the set of trans-Neptunian objects which are at or near the 3:2 resonance with Neptune, of which Pluto is the longest-known and most famous member.

About halfway down the article is an image of the orbits of Orcus, Pluto, Neptune, Uranus, and Jupiter, represented in a rotating reference frame around the sun that has a period of one Neptune Orbit.

The motions of Orcus and Pluto in a rotating frame with a period equal to Neptune's orbital period (holding Neptune stationary.) 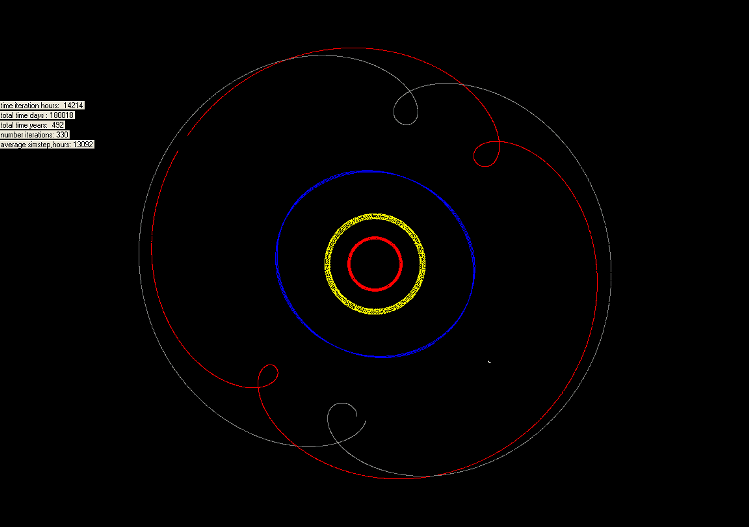 From the Image Description:

The motion of Orcus and Pluto in a rotating frame with a period equal to Neptune's orbital period. (Neptune is held stationary.) Orcus is a plutino in a 2:3 mean motion resonance with Neptune. Pluto is grey and Orcus is red. Neptune is the white (stationary) dot at 5 o'clock. Uranus is blue, Saturn yellow, and Jupiter red. There are 41 frames each having 3*164.8 years (3 times Neptunes orbital period).

In the fully animated version, the total timespan is roughly 20,000 years and the animation accounts for the precession of the orbits of Orcus and Pluto relative to Neptune over that period.

I do not know if this is what you are looking for, but I thought it might be helpful.

Not the answer you're looking for? Browse other questions tagged orbital-motion resonance or ask your own question.

9
Will Neptune change Pluto's orbit some day?
5
Are orbits interior to Jupiter's orbit less stable than orbits exterior to Jupiter's orbit?
12
What is the irregularity in Uranus' orbit that is caused by Neptune?
3
How does the Pluto-Charon orbital 'dance' affect Pluto's elliptical orbit around the Sun?
55
What does the Moon's orbit around the Sun look like?
1
What is the orbital velocity of Pluto around the Pluto-Charon barycenter?
1
Analytic solution to the Kepler problem from position + velocity initial conditions