Is direction of angular velocity just a definition or has a physical significance?

I am a high schooler so I don't know a lot of fancy maths but I do know some of calculus and multiplication of vectors as dot or cross product. I am learning about Angular velocity. And I am confused that is the direction of angular velocity just a definition or has a physical significance. I looked and searched for this on the internet and several other places and of course, I found the answer but its too diverse as someone says that it is defined and others say that it has some significance. I was amazed and confused much more when I saw gyroscopes in action.

Here are some of the search work I did:

And there are several other pages on the internet that I tried but this remains the same all over. So what I want is not only the answer but also its validity. Thanks and appreciation to anyone who answers or puts his/her effort into this question.

Many people were getting confused by what I mean by Physical Significance. Here's what I mean If a thing has physical significance then its effects will be real and you will be able to see them. As a force, although the force itself is not visible its effects are and that too in the same direction in which a force is said to be in. So a direction is real but a quantity assigned in that direction can be just to help us solve some problems or fix some glitches and it could very well be a mathematical trick like a pseudo force in an accelerated frame. Hence for this question, has the direction which is told to be the direction of angular velocity something physical that is happening in that direction? Like a motion, you can not say that a car is moving in $-X$ direction if it is moving in $+X$ direction if the coordinate system is already defined of course.

Everyone confused due to a lot of ambiguity in the question. Here's the final Edit and this is the actual question whose answer would be indirectly the answer to this entire title- Could we have defined the direction of Angular Velocity to any other direction if we had more options or let's say we had 4-dimensions reality? 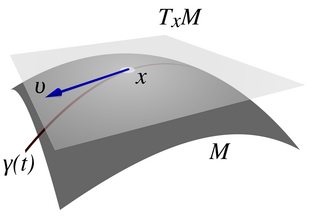 Therefore, an angular velocity is an element of the Lie algebra of $\mathrm{SO}(n)$, which is denoted by $\mathfrak{so}(n)$.

So what is $\mathfrak{so}(n)$ like? Intuitively, we can specify any angular velocity $\omega$ as follows:

Each plane $p_i$ also carries an orientation which tells us which way we intend to rotate. 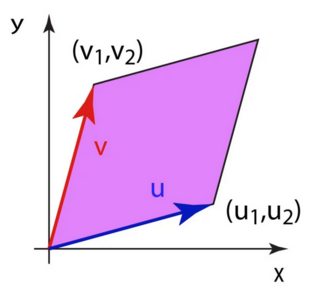 This corresponds to the fact that if we rotate this fast in one direction and equally fast in the opposite direction, we get nothing. Scaling either vector by a scalar $a$ simply scales the resulting angular velocity:

In 2 and 3 dimensions, something special happens: Any sum of blades is a blade. Thus we only need a single blade to specify an angular velocity. Consequently, every rotation is a simple rotation.

This trick doesn't work in other dimensions. For example, in 2 dimensions, the dual of a bivector is a scalar, which is why we typically describe 2D rotations using scalars.

where $\mathbf{u},\mathbf{v},\mathbf{w},\mathbf{x}$ are all mutually orthogonal. The animation below shows a double rotation acting on the 4D unit cube (stereographically projected to 3D, of course):

There is in fact a way of expressing angular velocity in such a way that there is no ambiguity of what-part-of-this-is-convention.

That notation is so much shorter, so much more compact, using that notation is a no-brainer. (It should be kept in mind thoug though that it is something of a fluke; it works only with a space with three spatial dimensions.)

That is why the shorthand notation is supplemented with the right-hand-rule, the right hand rule fills in that one necessary bit of information.

I am learning about Angular velocity. And I am confused that is the direction of angular velocity just a definition or has a physical significance.

You are going to get confusing answers, because your question as stated doesn't mean much. But it means something....

There are things in mathematical notation that are basicly arbitrary. Somebody chose to write them that way, and they worked, and now everybody does it that way. Like multiplication distributes over addition, and we write $a(b+c)$. We could have used any other symbol in place of (). $a:b,c:$ would have worked as well. For $a(b-c)$ we could do $a:b,-c:$.

We could have a convention that each time you have a newline.

That would some ways work better though it would take more space on the page. It's basicly arbitrary which way we use.

But the fact that $a(b+c)=ab+ac$ is not arbitrary. It's important.

It looks to me like you're asking what's the important part, and what's just convention.

Could we have defined the direction of Angular Velocity to any other direction if we had more options or let's say we had 4-dimensions reality?

It would have to amount to the same thing -- if it gave a different answer then it would be a wrong answer. Unless we changed the concepts around somehow so they combined differently to get the same end result.

But yes, instead of defining a vector axis as the defining direction, we could have two vectors to define the plane the rotation is in. And then at any one moment the velocity would be something in that plane. That wouldn't make any practical difference in 3D but it might be clearer.

A rotation is in some particular plane. If you use polar notation, rotation changes the angle but not the length. Polar coordinates (or for that matter cartesian coordinates) gives you an arbitrary zero point, and whatever point you rotate around, you arbitrarily subtract its displacement from all the locations so it will be at zero to do the rotation. You can add the displacement back later with no loss.

Using the normal vector is only one possible way to describe which plane the rotation is in. That's arbitrary notation.

First lets be on the same page regarding what is angular velocity ?

Angular velocity often, denoted as $\omega$ is the rate of angular displacement, denoted as $\theta$ with respect to time i.e. you might have seen this equation a lot $$\displaystyle{\vec{\omega} = \frac{\vec{\theta}}{t}}$$ and if we are talking about instantaneous angular velocity then : $$\displaystyle{d\vec{\omega} = \frac{d\vec{\theta}} {dt}}$$ The angular displacement is the change in the plane angle, subtended by the body which is performing the motion, at some reference point.

The direction of angular velocity, basically tells you in which direction is a body rotating or performing circular motion with respect to a reference point i.e. it tells you the direction of the angular displacement.

And of course you can use the Right Hand thumb rule, also referred to as Maxwell's Corkscrew Rule to find the direction of angular velocity. Some teachers in Highschools, while teaching mechanics to students, say that angular velocity is a vector but they treat it like a scalar, which is wrong.

The vectors representing rotation are chosen along the axis if rotation because that is the only direction in the system which is usually not continuously changing direction. That said, such vectors can accurately represent the direction and magnitude of rotational quantities.

The general motion of a 3D solid body is a rotation about an instantaneous axis (line in space) and a parallel translation along the axis. This is the so called Chasles's theorem.

To describe a line in space you need the direction of the line, as well as any point along the line.

The motion of a solid body is described by the following properties, derived from the rotation vector $\vec{\omega}$, as well as the velocity vector $\vec{v}$ of some point on the body (the reference point).

So the direction of $\vec{\omega}$ not only gives you (2), but contributes to the location of the rotation axis via (3).

In reverse, you can transform the rotation about the axis plus the parallel motion to the velocity of the reference point with the following expression

PS> Something similar happens with force vector $\vec{F}$ given the torque of the force at some reference point $\vec{\tau}$. You can find similarly the position $\vec{r}$ and the parallel torque of the line of action of the force.

Not the answer you're looking for? Browse other questions tagged newtonian-mechanics vectors conventions angular-velocity or ask your own question.

34
How to define orbital angular momentum in other than three dimensions?
0
Direction of angular velocity
0
How to know the rotation of moment vector in 3D?