Does the inner core of the Earth drop?

If standing on earth, I experience the planet's gravity. Rain drops are accelerated to move toward its centre and reach the crust. These attractions are mutual. This contrasts to e.g., the ISS with reduced / microgravity only. So I started to ponder about Earth's solid core, simplified to float, ball-like, in the outer core known to be a liquid. Equally, I simplify earth to a sphere with a tilted axis of rotation aligned parallel to the straight line from geographic south to north, too. 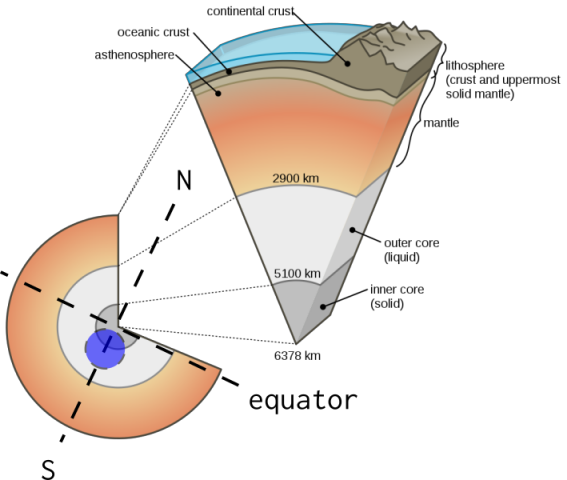 (modified from this source)

As seen by the tides, and its path around sun, planet earth experiences gravitational attraction with the sun (and its moon), too. If the planet were flexible like a bread dough, instead of a spherical shape, the planet would be constantly kneaded to exhibit a protrusion pointing toward sun, and to lesser degree, moon. Thus I speculate the inner core could equally move slowly / «sink» toward such an external gravitational partner because of its higher density (12.8 to 13 kg/L) compared to the one of the outer core (12.1 kg/L, both taken from here, lacking information about the viscosity of the melt). In the illustration, I marked the position of an excessively displaced core by a blue circle.

Question: Is this line of thought about a «dropping Earth core» correct, is there experimental record for this? In analogy to the ultrasound at the physician, maybe echo waves would travel in shorter time from the mantle to inner core and back if this distance were shorter and thus allow a diagnosis. Given the mass and inertia of the inner core, these imagined movements possibly are small, too.

Moving the core along the line S-N need not be the correct direction of movement to represent here.

This contrasts to e.g., the ISS with reduced / microgravity only.

I'm not sure how the ISS contrasts. Both raindrops and the ISS experience gravity and accelerate toward the earth. The only difference is that the raindrop will also experience drag and in short order will strike the surface.

The core experiences centrifugal forces as well as centripetal forces, just as the rest of the Earth does from its orbit around the Sun, and from the Earth - Moon orbit. While the center of gravity and the center of mass are not always the same, given the Earth's mass, rotational speed, and distance from the Sun, the changes to the core would be negligible. This means the core would remain fairly centered.

The effect of moon and sun is not exactly to attract things in earth.

For example, if we put an object in a scale at midnight with new moon, the weight is the same as at noon. In spite of the object is at first reasoning being pulled more at night by earth, sun and moon together.

What happens it that the object, the scale and all the earth are in free fall together with respect to the other celestial bodies. So, only the earth gravity makes any difference for the object.

The effect of that celestial bodies is differential. Portions of the sea at noon are more attracted than portions at midnight at the same moment, leading to the tides.

There is some effect of tides, leading to stresses in the solid core. But it has no reason to move around.

Not the answer you're looking for? Browse other questions tagged newtonian-gravity earth geophysics or ask your own question.

1
Does Earth produce metallic elements in its core?
15
What is the evidence for the super-rotation of Earth's inner core?
9
Marvin the Martian vs. the Death Star: how much energy will they actually need to disintegrate the Earth?
8
How much heating does Earth inner core provide to the surface?
1
Thought experiment: Could the Earth be cooled by pumping refrigerant?
0
How do I calculate evection and variation for the moon in my simple solar system model?
1
Why do the 2 planets in a two-planet system orbit around the center of mass?