Can why gyroscopes don't fall be explained by conservation of energy?

you know how when you spin a gyroscope it supernaturally stays up even if you bend it over and its parallel to the ground? Well that was unbelievable so I did some math to see why this works. I tried to use conservation of energy but it didn't get me the result that I wanted. Heres my reasoning- The gyro starts of with some kinetic energy $KE_1$ and gains some kinetic energy as it spins around the piviot that it spins around when you let go after spining the wheel of the gyro. That energy is $KE_2$ Now the wheel of the gyro never slows down so $KE_1$ doesn't get converted into $KE_2$. But then how did $KE_2$ get its energy? The only reason the wheel of the gyro slows down is because of friction so I don't see why it should gain that energy $KE_2$. That would violate the conservation of energyl... any help is appreciated...thanx in advance

You might notice that when a gyroscope is released it’s centre of mass drops (a little) and so the gyroscope loses gravitational potential energy and gains kinetic energy.

Can why gyroscopes don't fall be explained by conservation of energy?

From the gravitational potential energy lost as the gyro falls from its initial position. (The drop is small, which corresponds to the low $\rm KE_2$.) This is the same as any other falling object. More generally, attempting to do an energy-conservation argument without considering all of the forms of energy present in the problem is basically guaranteed to fail.

As it happens, gyroscopes do fall, by a bit; the actual motion looks something like this: 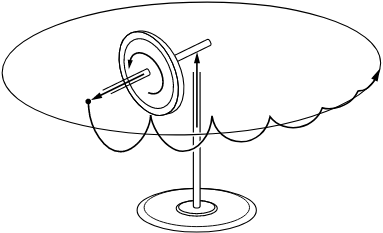 (The role of friction here is to damp out the oscillations.) The only way to prevent this is to start off the motion of the gyroscope at the correct rate of precession, i.e., to provide $\rm KE_2$ externally.

Not the answer you're looking for? Browse other questions tagged energy-conservation gyroscopes or ask your own question.