How can the heat capacity of diamond be so low?

I'm taking an introductory thermodynamics course, and according to my professor, the heat capacity of an ideal gas is $\frac{3}{2}R \approx$ 12.5. Since ideal gases don't have any attraction between molecules, every bit of energy put into the system goes towards increasing the Kinetic energy of molecules.

Since average KE is literally a definition of temperature, it should be that any substance should require at least this much energy to increase their temperature. My intuition says that a higher heat capacity simply tells us some energy is being stored as PE when heat is added.

However, the molar heat capacity of diamond is about 6.11 J/(molK), which is less than an ideal gas. Even if we accept that some bizarre quantum mechanical effects are in play, isn't there a problem in the fact that adding 6.11 Joules to 1 mole of diamond increases the total Kinetic energy of the atoms by 12.5 Joules? How is this possible?

Since average KE is literally a definition of temperature [...]

The proper definition of temperature is

As a simple example, consider a 3D Einstein solid. It's not difficult to show that the average internal energy per particle is given by

This different from what one would naively expect by applying the equipartition theorem to a system of classical oscillators (in which the energy is shared equally between kinetic and potential). In that case, we would simply find that $\left<E\right> = 3kT$. 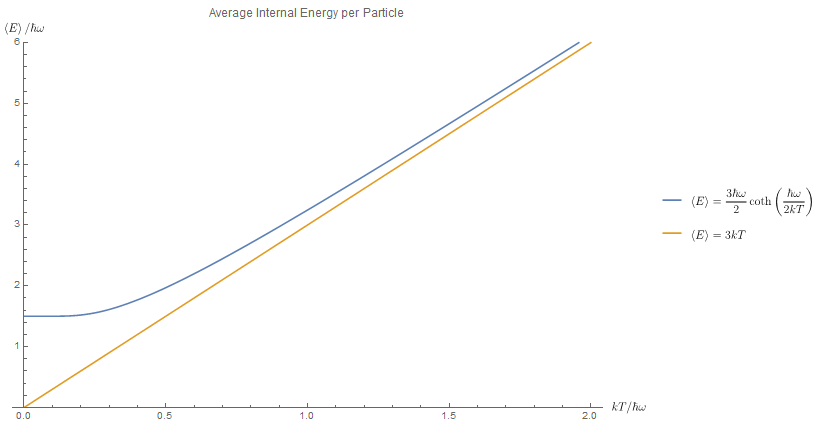 From these relations we can compute the heat capacities of our systems, $C = \left(\frac{\partial U}{\partial T}\right)_V$ where $U=N\left<E\right>$. We find that for the Einstein solid,

whereas $C=3k$ for the classical solid. 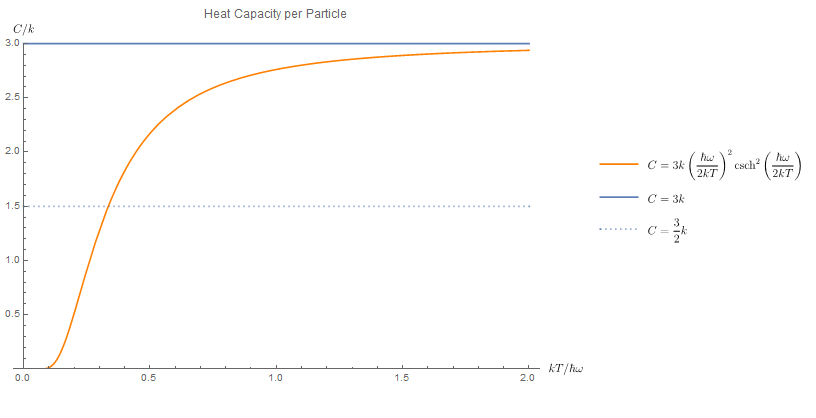 My intuition says that a higher heat capacity simply tells us some energy is being stored as PE when heat is added.

This intuition isn't bad. Indeed if you restrict your attention to classical physics, you'd be right - the classical counterpart to the Einstein solid has a heat capacity of $3R$ rather than $\frac{3}{2}R$ (note that $R=N_Ak$, where $N_A$ is Avogadro's number) precisely because energy is stored as vibrational potential energy.

It's the quantum effects that are the key here - specifically the fact that the set of allowed energies for each particle is discrete. When the temperature is less than $\hbar\omega$ (which is the spacing between allowed energy levels), there is a dramatic departure from the classical heat capacity of $3k$ because a small parcel of energy changes the temperature quite substantially. If $T/\hbar\omega$ is sufficiently small, then the heat capacity of the Einstein solid can even drop below $3k/2$, the heat capacity of the classical ideal gas.

Diamond is special. The rigidity it gets from its somewhat unique crystal structure makes its effective $\omega$ very large. As a result, its heat capacity is unusually small even for relatively large values of $T$. Here's a plot of its heat capacity compared with aluminum and lead. 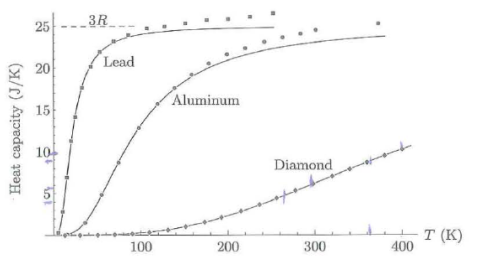 Not the answer you're looking for? Browse other questions tagged thermodynamics diamond or ask your own question.

0
Law of equipartition
11
If temperature is average KE per particle, and heat is total KE of all the particles, how can molar heat capacity vary?
1
Physical significance of temperature
0
Why do the specific heat constants vary with temperature for semi-perfect gases?
0
Trying to work out the Specific Heat Capacity of a gas
0
Molar Heat capacities
0
Change of temperature in the decomposition of an ideal diatomic gas into a monoatomic one at constant volume
0
Gasoline has a very high molar heat capacity. Is this a good thing for its use in engines?