Why is the centre of mass of a semicircular wire outside the body?

If we think in real life the COM of semicircular wire is in air? What? Can anyone please explain it to me? Or is the way I am thinking wrong?

The center of mass is an "average" position of the mass of the system, so there's no reason to suggest there's actually mass there. In the same way, the average of outcome when you throw a $6$-sided die is $(1+2+3+4+5+6)/6=7/2$, which is not the value of any face on the die. This average value is certainly real.

To take a more extreme example, the center of mass of a ring with uniform mass distribution is the center of the ring, something intuitively clear. Moreover, from the symmetry of the ring, it does't make any sense to have the COM on the ring itself as all points of the ring are equivalent.

The location of the COM is certainly real, and the force does act as it all the mass was located there, even if there is no actual mass at that point.

You comment that the location of the center of mass "doesn't make sense" because we can't see it with our naked eyes. But in fact we can see it by doing a very simple experiment. Suspend the wire from a single point with a post or something and draw the line vertically downward from the point of suspension. 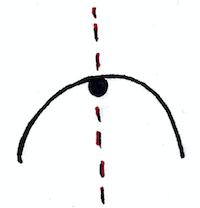 Then suspend the wire from a different point and do the same thing. The point where the two lines intersect gives the position of the center of mass. 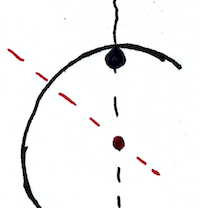 So we don't have to take it on faith that the prediction for the location of the center of mass is correct. We can do an experiment to check that our prediction is consistent with the reality we observe.

(Strictly speaking, this procedure gives us the position of the center of gravity instead of the center of mass, but the difference between these is not really important for answering your question.)

Why does it make no sense because centre of mass(COM) is a place where the mass of the whole body is present.

Yes, at first it is odd to think about the center of mass not being located where any mass is, but it follows directly from the definition of center of mass.

The center of mass of a system is just a weighted average of the position of the masses in the system, where the weights are the masses of each part of the system. For a discrete set of $N$ point masses, we have

Classical Physics is about the things that we see in our daily life with our naked eyes. But this case it is something we have to believe and which don't make sense when we really see a semicircular wire in real life

You can definitely "see the center of mass" even if it is not located within the body. For example, take your rigid semicircle wire and throw it through the air so that it spins around while doing so. Even though various parts of the wire will be moving around, if you were to track the center of mass location of the wire you would find it follows a smooth parabolic shape, consistent with Newton's second law for extended rigid bodies.

This is getting somewhat philosophical, but one could make the same argument about velocity vectors. It's not like when we move around there are actual arrows pointing in the direction of our motion, yet we still talk about velocity vectors, and they are useful in explaining the world around us. In the same way, even though the center of mass is not an actual physical thing, it is a useful concept that can describe a lot of physical phenomena. If you think that this isn't sufficient to be considered as "real", then that's fine. The physics and the universe don't really care how to interpret their behaviors.

"(COM) is a place where the mass of the whole body is present."

Well, that's where your misconception lies - you are taking this statement too literally.

When you want to simplify a physical situation, and pretend that the body is just a point mass, the COM is, conceptually, just a place (anywhere in space) where that point should be so that the physics and the associated math work out.
That's really all there is to it.

It's a simple form of modeling: you're representing the actual physical object as something else - in this case, a mathematical dimensionless point endowed with mass, and you're ignoring the actual shape of the object. This works as long as you're solving a problem that doesn't require taking the shape (or other ignored properties) into account (i.e., the problem is such that it suffices to abstract away the details of the object and think of it as being a point mass).

The COM turns out to be just a weighted average of the positions of all the individual bits that comprise the object; for details, see BioPhysicist's answer.

This also means that, while you were bending the wire to get the ring, the COM should have been moving from its initial position to the center. You can see how the distribution of mass influences the position of the COM.

I noticed your comment on d_b's answer. Let me try to give a way to figure the COM that does not rely on gravity. Let's try no (low) gravity.

The COM is essentially the point of rotation when no forces are applied.

In this video, you see a gyroscope rotating in the International Space Station, after a gentle nudge. Let's focus in the first 20 seconds where the astronaut displays random motion and NOT gyroscopic effects. The whole gyroscope seems to be rotating around its centre point.

Now, imagine that instead of the gyroscope, you had just one ring. Kind of like this (mspaint skills):

What do you think the ring would do in that case? Exactly the same thing. It would rotate around its centre point. Because that's where the COM is.

If the wire shape is antisymmetric with respect to the central point that center point is COM.

Else in general COM will be away.

By coiling spiralling arrangement of a flexible wire COM can be adjusted to be on the wire.

As pointed out, the center of mass definition does not require it to be located in the object. An interesting example is a belt balancing off of a finger. The center of mass of the belt is in the air directly below the pivot point so it's balanced (no net torque).

The center of mass is the point where if a force that passes directly through the COM is applied to any point on the mass it will cause translation of the mass without rotation. When the wire is straight its COM is in the center, as you thought, but when we bend the wire into a semi circle we are changing the position of much of the mass. This also changes the position of its COM to a point that is not necessarily inside the mass. Many objects may have a COM that is outside of the mass itself, most empty drinking glasses, rings, horseshoes, and other objects.

The center of mass is in some sense the average position of the bodies constituents. Now the average value of some set of numbers can be defined variously depending on context, mean, median, mode, rms etc. In any context we can define what sort of average will be most helpful for our purpose.

For an insect standing at one end of the wire and wishing to visit other parts, the average length of its journey is defined in the way you would like. It is hard to think of many other situations where your average would be useful.

Not the answer you're looking for? Browse other questions tagged classical-mechanics rotational-dynamics mass rotational-kinematics or ask your own question.

1
How does a cyclist moves the center of mass of the cycle-cyclist system?
2
Instantaneous Axis/Centre of Rotation
2
Ought we say 'body mass', rather than 'body weight'?
0
In the derivation of centre of mass, what is the basis of assumption a point having same acceleration as the body?
1
How would this multibody system rotate in free space?
0
Regarding the acceleration of centre of mass of a rod
2
Rotating Rod and conservation of energy