I don't understand why the probability density in the double slit experiment in the case of both slits opened, has a minimum corresponding to the maximum of intensity. Shouldn't $P_{12}$ have the same trend as intensity? 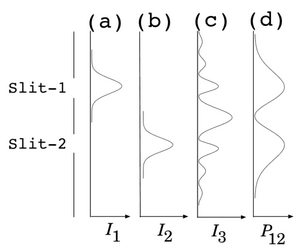 You didn't say what the manual claims that (a) through (d) are supposed to represent, but as far as I can tell the diagram is simply wrong.

If (a) and (b) are supposed to be the intensities on the screen when only one slit or the other is open, then the intensity when they're both open will have to look essentially like the sum of those two curves. Interference can only happen at points on the screen that get a significant amount of light from both slits, and in their setup that's nowhere.

Not the answer you're looking for? Browse other questions tagged quantum-mechanics double-slit-experiment interference probability or ask your own question.