Intuitive explanation for why voltage decreases as distance between charges decreases?

A uniform electric field can be set up as shown: 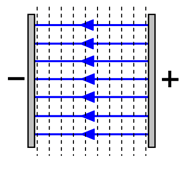 The force for a given charge will be constant anywhere in this field. However, as the distance from the charge to the oppositely charged plate decreases, the potential difference also decreases. This explains why force remains constant, as electric field strength is voltage divided by distance.

Could someone correct/explain this distance question?

This explains why force remains constant, as electric field strength is voltage divided by distance.

The electric field is constant and that explains why the force is constant.

I thought of potential difference as the difference in potential/energy between two points.

The potential difference also increases with the distance $d$.

This helped massively! I have a question related to this answer: the pd between any two points in a series circuit is assumed to be the pd of the battery/voltage source.

Is this an ideal circuit, or is it that way in reality? Wouldn't it relate in any way to the distance a point in the circuit is from the voltage source? –

Also, all real wires connected between components in a circuit have resistance. But it is often considered negligible enough to be ignored.

Regardless of whether the circuit is ideal or not, the potential difference (voltage) between any two points in a circuit is the work required per unit charge to move the charge between the two points. For an ideal wire whose resistance (impedance) is considered zero no work is required to overcome the resistance (impedance) and thus the pd between any two points on such a wire is assumed to be zero.

Not the answer you're looking for? Browse other questions tagged electric-fields charge potential voltage capacitance or ask your own question.

3
Potential Difference Between Capacitors in Series
5
Why does the potential difference between two charged plates increase as they move further apart?
1
Intuitive explanation for uniform electric field between capacitor plates
6
Grade 12 physics electric fields question
1
How does distance effect the flow of charges between a capacitor's plate and battery
0
Why do we use the term “voltage” for a battery?
6
Why as distance decreases capacitance increases?
1
Electrostatics and potential of points around charged plates
0
Is the electric field between two oppositely charged parallel plates negative?And what about two electric lines with infinite length?