What is the difference between $\omega$ and $\Omega$ in the equation $\Omega = \theta_o\omega\cos(\omega t +\delta)$?

The standard equation for any object moving in a linear simple harmonic motion (SHM) is $$x=A\sin(\omega t +\delta)$$ where $A$ is the amplitude, $\omega$ is the angular velocity.

Likewise, converting the linear variables in the above equation to angular variables, we get the equation of angular SHM as $$\theta =\theta_o\sin(\omega t + \delta)$$

On differentiating this equation with respect to time, we get, $$\Omega = \theta_o\omega\cos(\omega t +\delta)$$

This is where I got confused with the difference between the term $\Omega$ and $\omega$. 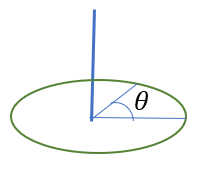 So, my question is, What exactly is the difference between the terms $\omega$ and $\Omega$ in angular SHM?

You seem to have goofed up in the drama of variables. Now to simplify this, lets begin with one dimensional simple harmonic motion along the x-axis. Have a look first at the following animation:

As you can see that when you project a circular motion on either of the axes, you get a simple harmonic motion. Now the $\omega$ that you have put inside the the sine function, i.e., the coefficient of time(t), is nothing but the angular velocity of the particle in this circle whose projection on the x/y axis is the simple harmonic motion.

Now you do not convert anything to angular variables. That's a different case of the simple harmonic motion known as ANGULAR SIMPLE HARMONIC MOTION . Suppose you consider the following pendulum,

Here when you solve for the torque of this pendulum it comes out to be: $$\tau\propto\, -\alpha$$ with $\alpha$ being the angle from the vertical at any given point of time. Here, an approximation has been used to arrive at the above propotionality which is that the amplitude must be small so that $$sin\,\alpha\,\approx\,\alpha$$ Solving this further like we solve most cases we arrive at the differential equation:

Now the capital $\Omega$ that you use is nothing but the angular velocity of the pendulum. $$\Omega\,=\frac{d\alpha}{dt}$$ Now everything should be just fine from here on, with the time period being $$T= \frac{2\pi}{q}$$ which can be defined just like the period of any mathematical periodic function is defined. And by now you should be clear about the two variables. But physics is not only about the mathematics and this is mechanics!! Study of our everday motion! So if you still want to visualise the constant $q$ like we did in the first case, do the following:

So I hope that all sort of confusion is clear after reading this. Should you struggle, feel free to comment and sort it out!

The rate of change of angular displacement is called angular velocity which is usually denoted by $\omega$. $$\omega=\frac{d\theta}{dt}$$

In SHM, the term $\omega$ does not mean the same as above. Here it is used to denote angular frequency with respective to the phase at any instant in SHM. Now I am assuming you know the meaning of phase. So angular frequency means how many phases can be completed in a second or even simply how fast the object is oscillating. Hence it appears in the velocity term for SHM. Let Time Period of SHM be T. Then$$\omega = \frac{2\pi}{T}$$

Not the answer you're looking for? Browse other questions tagged newtonian-mechanics harmonic-oscillator angular-velocity harmonics or ask your own question.

6
Difference between angular frequency and angular velocity?
8
What will be the equation of motion of driven pendulum for amplitudes beyond the small angle approximation?
1
Mismatch between underdamped and critically damped solutions
1
Simple harmonic motion differential equation and imaginary numbers
1
Can a periodic motion whose displacement is given by $ x=\sin^2(\omega t)$, be considered as a SHM?
0
What's wrong with my approach?
0
Can the equation of total maximum amplitude $A_n=\sqrt{A_1^2+A_2^2+2A_1A_2\cos(\Delta\phi)}$ be used though the waves are not in the same line
0
What is the differnce of angular velocity and angular frequency in angular SHM