Have there been any experiments that examine the collision between an anti-down quark and an electron?

Like many people, I've been chasing down idle curiosity, trying to get a better understanding of how certain particles interact with each other.

I have been particularly unsuccessful in trying to pin down what happens when an anti-down quark and an electron collide. Many of the other interactions I've looked into have (relatively...) simple answers such as "Nothing special happens," or "they annihilate," but I've been unable to even find that during my searching.

Have there been any experiments that examine collision between an anti-down quark and an electron?

This question is related to Are there different kinds of antimatter reactions? and Does a particle annihilate only with its antiparticle? If yes, why? but neither question addresses electron-quark interaction.

They don’t annihilate because they aren’t antiparticles of each other. Annihilation into photons would not conserve electric charge, among other things.

I spent a few minutes looking for experiments studying collisions of electrons and antiprotons (which contain anti-down quarks) but didn’t find any.

Scattering of electrons from up and down quarks in protons and neutrons is well-studied, initially at SLAC in the late 1960’s.

The antiparticle version of your question is well-studied with real (non-virtual) particles. For example, this paper discusses positron-proton collisions. Positrons are the antiparticles of electrons, and protons have down quarks inside.

[I’m] trying to get a better understanding of how certain particles interact with each other.

If you are interested in the possible interactions allowed by the Standard Model, this diagram from the Wikipedia article will be of interest. Unfortunately, it doesn’t include interactions involving Higgs bosons. 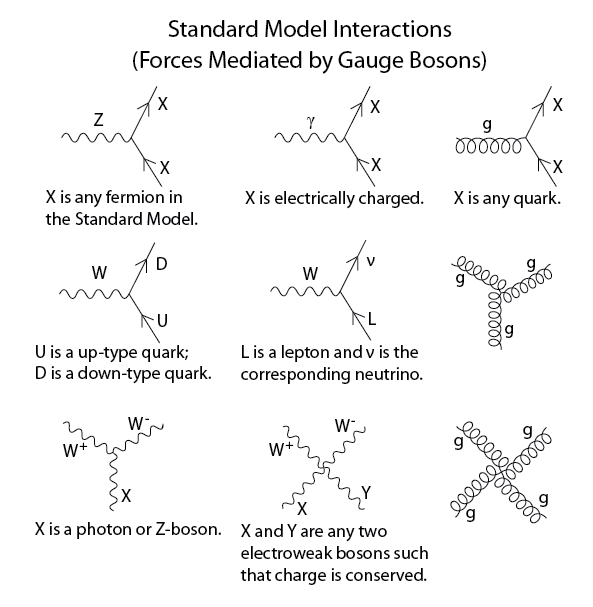 Not the answer you're looking for? Browse other questions tagged electrons standard-model antimatter quarks or ask your own question.

14
Does a particle annihilate only with its antiparticle? If yes, why?
2
Are there different kinds of antimatter reactions?

16
How do $\pi^0$ particles exist?
0
Is it possible that electron and protons are created after a collision of matter and antimatter?
2
Are there different kinds of antimatter reactions?
2
Could an electron enter the nucleus, and if so would it be captured by a proton?
15
Are there any Baryons that have quark-antiquark combinations?
2
Is there a neutral current interaction between an antineutrino and an anti-strange quark?
4
Positrons and Cloud Chambers - HOW?
1
What's the difference between an electron and a quark?