Thanks for any help. Here is the momentum example: Alice obtains a fire extinguisher which she holds firmly on her office chair. 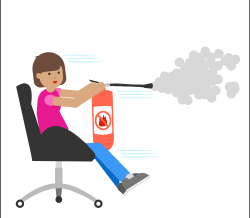 Suppose Alice opens the nozzle of the fire extinguisher so that it ejects gas at a constant rate (mass per unit time) and constant speed. How will Alice move? The answer for the example was that she accelerates backwards.

I see the answer by using momentum with

. Since the rate of release and the speed are kept constant the numerator is constant. Since Alice's mass includes her chair and the extinguisher (which is getting used up) the denominator is getting smaller so that Alice's velocity is actually increasing (so she is accelerating). But if I try to use impulse

I actually get an answer that she doesn't accelerate backwards.

should be 0 because the gas's speed is constant and if velocity is constant then its derivative acceleration is 0. Hence

which means that she is not accelerating. Can someone point out what I'm missing? Thanks.

The velocity of the gas relative to the extinguisher is constant when it is released, but this doesn't mean the gas has a constant velocity. As the gas molecules are expelled from the extinguisher they still lose momentum, and this momentum is gained by Alice.

As a simpler model, imagine being on a frictionless surface while holding blocks. Now imagine throwing the blocks one at a time, each time throwing with the same force over the same time so that the blocks leave your hand at the same speed relative to you each time. Just because each block leaves your hand with the same relative velocity does not mean there is no force being exerted on you by the block. Each time you throw a block you will indeed increase your speed. Now, instead of blocks if you have many, many small molecules you are "throwing", the result is still the same.

In terms of impulse, you have to look at the force acting between you and the gas, not forces on the gas after it has left the extinguisher.

Not the answer you're looking for? Browse other questions tagged momentum acceleration thought-experiment or ask your own question.