Can a Styrofoam box bounce back into a moving van?

I just came across this video. A styrofoam box falls out of a moving van, bounces off the road and lands back in the van.

How can the box land back so precisely inside the van?! Usually, I would consider these type of videos as bogus. But the fact that the box is very light and that I have seen dry leaves chasing a moving car, I have put more thought into this.

Is this possible; due to some effect of turbulence?

Can the "suction force" due to a moving vehicle propel an object, faster than the speed of the vehicle itself? If so, from where does the extra kinetic energy of the box come from?

Is this possible; due to some effect of turbulence?

Sure. I'd consider that video plausible, at the very least.

Can the "suction force" due to a moving vehicle propel an object, faster than the speed of the vehicle itself? If so, from where does the extra kinetic energy of the box come from?

First, keep in mind that the box already has enough kinetic energy to keep up with the truck, not counting the small amount it loses when it hits the ground. It just needs a little extra push to get it back into the back of the truck.

So the question comes down to whether the box could bounce like that, and whether there's anything that would provide the small amount of extra force needed to move it forward back into the truck.

As noted by others, without knowing what the box is made of, it's impossible to say for sure whether the bounce is realistic. But a solid polystyrene box seems like it would both be tough enough and have enough give, for it to bounce off the roadway like that. For that matter, even a box made of polystyrene foam (e.g. Styrofoam, such as a cheap insulating cooler) might bounce like that a few times before it finally falls apart.

And keep in mind that the vortices that can cause the box to fly back into the truck (see below), are also moving from under the truck upwards. So the vertical movement of the box doesn't need to be provided solely by the actual bounce.

So what about the force needed? Well, it seems to me that there's enough in the force of the vortices caused by the pressure differential between air to either side of the truck and that at the very rear. For example, see this image from a paper about a drag-reduction device: 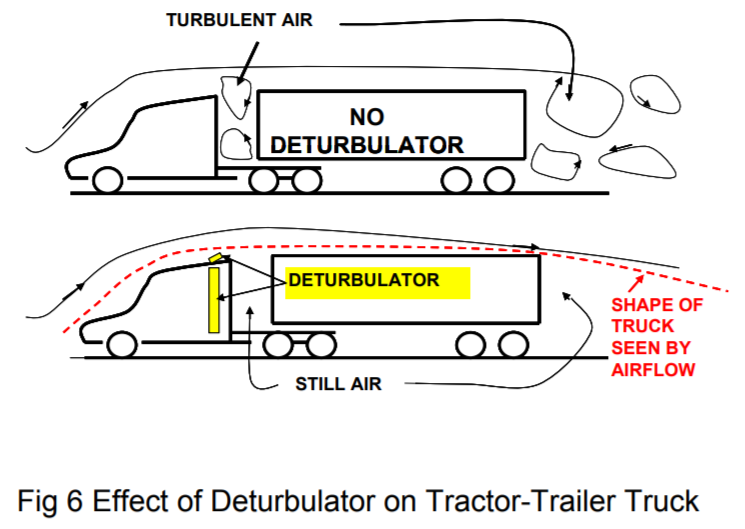 Less clear, but more fun to watch, is this marketing video for a whole-truck fairing meant to reduce drag:

You can also see the vortices in this article about the drag experienced by Tesla's Cybertruck:

More generally: high pressure air from the space around the truck, above and below, but especially the sides, will tend to move to the low pressure area formed behind the truck. But the air has inertia; it can't make the 90-degree turn immediately, so it winds up a bit behind the low pressure area and starts to curl as it is pulled forward back into it. This creates vortices, and these vortices have forward motion relative to the vehicle. That is, the air is actually moving forward faster than the vehicle itself is moving.

All that has to happen is for the box, as it rises back up into the turbulence, to get caught just right in one of these vortices and get pushed forward. Of course, the vortex itself doesn't necessarily blow straight into the back of the truck (though some of the air will, my point is that it's not necessary even for any of it to). The air eventually turns even more, curling around and becoming turbulent. But the air has a lot less mass than the box. It can turn more than the box can; the box, after that initial push, can't make the turn and falls out of the vortex with the extra forward energy it was given, landing it back in the truck.

The bottom line: aerodynamic drag is a significant problem in large, boxy vehicles like this, specifically because of the relatively large pressure differential that exists between all the air that's been pushed out of the way of the vehicle and the space immediately behind the vehicle that the vehicle is leaving (which is essentially a vacuum, if not for all that air rushing back in to fill it). Just as pressure differentials such as these can keep a Boeing 747 or Airbus 380 aloft (for example, to name a couple of larger airplanes), certainly the force created by such a differential could push a lightweight box just a few feet forward to place it back in the truck it just fell out of.

Does any of this prove that the video is real? No. I think that's beyond the scope of this forum to accomplish. Even a completely realistic video could still be faked. But I don't see anything in that video that is patently impossible.

Think about why race cars follow each other very closely. The reason is that the first car creates a suction behind it. This is actually a huge problem with transport trucks because it is very bad for fuel consumption. On this page you can see one possible solution to the problem, flaps that stick out the back of a truck and reduce the suction effect. In the old days, when kids sat in the back of a station wagon with the rear window down, it was a problem that the exhaust was sucked into the car. So they created rear spoilers to aim the wind down across the window, to block the sucked air. Us old guys can remember when this spoiler was introduced.

How does this sound:

Suppose the car is not moving forward, but a sudden motion unbalances the box and it falls, has some elasticity and bounces up, like a ball.

The car when it moves, creates a vacuum behind it which sucks in air thus generating a motion towards the car , at the velocity the car moves.

A bump in the road dislodges the box with a small impetus opposite to the velocity, the sucking air not enough to counteract it.

It is quite clearly a hoax to me, and here is my physics-based explanation. There seems to be a jerk (not just acceleration) of the box after the initial bounce, towards the ceiling of the truck. Note that the initial bounce trajectory does not bring the box high enough to go back into the truck, and after the jerk the box flies up much higher than it dropped from. Since this is consistent with a thin string pulling on the box, I see no reason to think otherwise.

Not the answer you're looking for? Browse other questions tagged fluid-dynamics everyday-life aerodynamics turbulence or ask your own question.

3
Can ship/boat propellers be placed, with adequate protection, alongside the fuselage instead of at the back?
1
Why does letting air into a box of wine help the flow?
7
In tennis, why does topspin serve bounce higher than flat serve?
1
When an object plunges into water, what is the maximum height a droplet from splash can reach?
29
How can fast moving particles gain energy from slow moving ones?
16
Can a droplet of water bounce back when it hits a water surface?
2
How come I can kick a football further when it's moving towards me?