Precession of perihelion of Mercury?

I have a few questions about precession of Mercury and GR corrections. Feel free to any that you can:

I have a few more minor doubts but i think they will be cleared if these are cleared first.

What this means is that, when working in the framework of GR, you can achieve different levels of precision by neglecting certain terms which are small in certain contexts. The roughest approximation to GR is Newtonian mechanics, you can then refine the estimate by considering relativistic effects ever more precisely. The problem is, the more precisely you want to consider the relativistic effects the harder it becomes in terms of calculations. For the proper, no-approximation route, in all but the simplest cases we need computers to crunch the numbers. On the other hand, Newtonian gravity is much more tractable, we know how to deal with it. So, for each interaction between two bodies we ask ourselves: how deep do we need to go? There are certain rules of thumb to tell us what needs to be considered and what does not. It turns out, for the Mercury-other planet pairs the Newtonian approximation works well, and the GR corrections would be undetectable, while for the Mercury-Sun pair the first relativistic order is small but detectable. 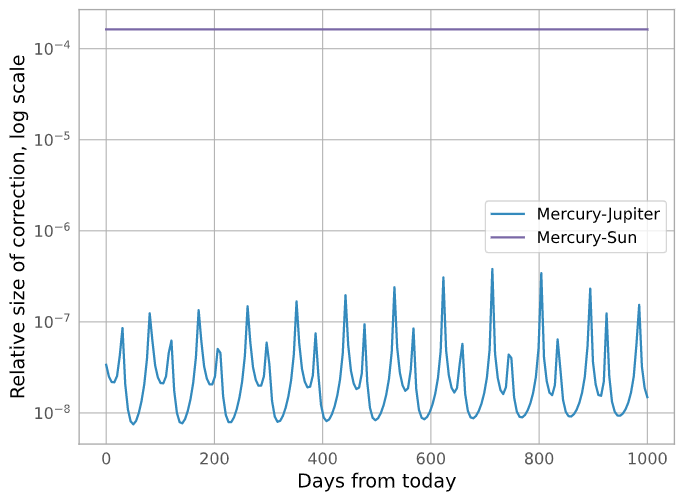 A full-GR calculation for the motion of Mercury would be unnecessarily complicated: the reasonable thing to do in this context is to figure out the margins of error on the measurements of the positions, then estimate how much any corrections will affect the result of the calculation, and neglect anything which is much smaller than the errorbars.

Even the calculation of the correction to the orbit of Mercury is an approximation: the crucial thing is, the expansion parameter (in this case it is $G M_{\odot} / L \approx 0.00016$) is small, so the next term in the expansion is unmeasurable. As we get more precise measurement devices, we will need to account for more terms.