I want to start off by saying that I've looked around for other explanations, but I've not really found any satisfying ones. My question is basically the whole "Why can anything move at all?" question, with a little twist. Refer to this picture: 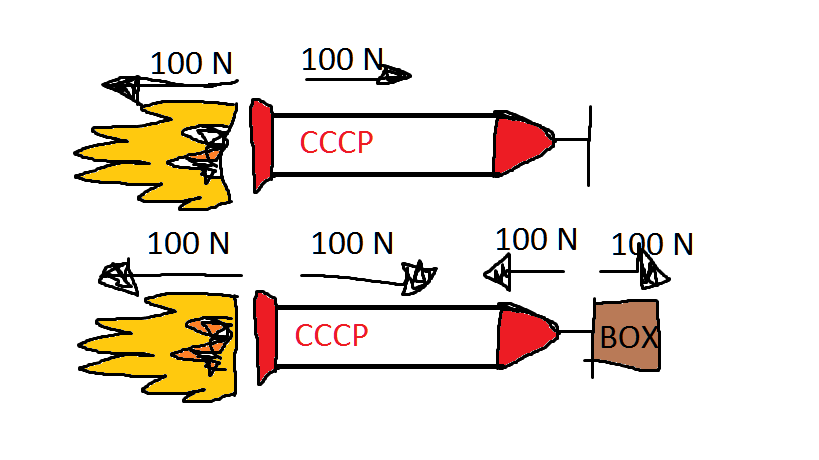 Now I understand that opposite forces act on different objects, so in the top one, the rocket would have a net force of a 100 N to the right, and accelerate, as per Newton's Second Law. However, in the bottom example, wouldn't the box push back on the rocket, equal and opposite, as the rocket pushes on the box, therefore cancelling the forward push from the exhaust, making the rocket not move at all, whilst the box gets a net force of a 100 N?

This isn't true obviously, but why not? Also, in this earlier Phys.SE post there is a great answer depicting a finger and a matchbox. Now this post is very related to mine. I'm wondering why in that picture, the force of the finger pushing on the matches doesn't equal the force of the muscles pushing forwards in the finger? Surely when I'm having a force pushing the finger forwards, that same force applies to the matches?

I'm not sure where that picture is coming from, but it's misleading at best and here's why.

The problem is you're assuming the box has the ABILITY to push back with equal and opposite force. Newton's 3rd Law only applies when both objects are CAPABLE of pushing back with the same force. In your box example, Newton's Second law actually comes into effect: The force the rocket exerts cannot be balanced by the box (friction, gravity, etc.), so you're left with an unbalanced force to the right. This means both objects will move to the right.

In my answer, I will stick to the diagram: the box is capable of applying 100N of force leftward. From the start:

(1) Ignition, Blast off: 100N of thrust accelerates rocket to the right.

(2) Rocket collides with box of unknown mass--which is ok, because its mass does not matter.

(4) All acceleration stops, but velocity does not.

The question is "does the rocket not move at all". It moves, but no longer accelerates, as the net external force is 0N--so it cruises along at the velocity of 1st-box-contact.

Now if this were a physically sensible problem, one would just place the box AT THE BACK OF THE ROCKET, for an incredible specific impulse ($I_{sp}$).

172
Given Newton's third law, why are things capable of moving?