Frictional force on a rope wrapped around a drum

So there's a rope wrapped around a circular drum, subtending an angle $\theta$. A large force, $T_A$, pulls in in one direction, and a much smaller force $T_B$ pulls in in another direction. 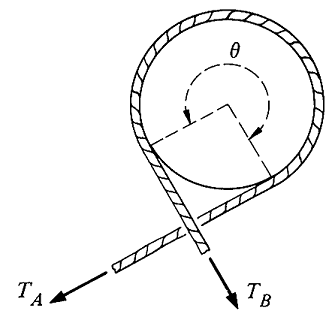 The rope remains motionless. The coefficient of friction between the drum and the rope is $\mu$. I'm supposed to show that $T_B=T_Ae^{-\mu\theta}$. I've tried to work this from both directions.

Backwards, it seems like I would need to first get $\log{\frac{T_B}{T_A}}=-\mu\theta$, and in order to get that I'd need an integral from $T_B$ to $T_A$ of what I imagine would be one over the frictional force, but I have no idea where that integral would come from.

Forward, I've tried to find the radial force on the pulley, so that I can derive the frictional force. The book I'm using contains a derivation of the force on a pulley by a rope under constant tension, where they use an infinitesimal angle element, find $$\Delta F=2T\sin{\frac{\Delta \theta}{2}}=T\Delta \theta$$ and then show that the horizontal component is $T\cos{\theta}\Delta \theta$ and integrate to get a total horizontal force of $2T\sin{\theta_0}$ (where $\theta_0$ is the angle subtended by the rope). Now in my problem the tension from both sides of the rope is not constant, so I replaced $T$ with $T_A+T_B$. I'm also looking for the radial force, not the horizontal force, which I think I could get by leaving out the $\cos{\theta}$ in the integral, since the infinitesimal force element is radial. But then I get $$\int_{0}^{\theta} \frac{T_A+T_B}{2}\ \mathrm{d}{\theta'}=\frac{T_A+T_B}{2}\theta$$ which would give frictional force $\frac{T_A+T_B}{2}\theta\mu$, which doesn't have anything close to a logarithm or an exponential. So essentially I'm asking, what is wrong with my method of integrating around the drum, because I'm pretty sure there should be a logarithm in it. Thanks for the help!

Draw a free body diagram for a small rope element subtending an angle $\Delta\theta$. Using the result for the force on the pulley derived in your book, you will find that the force of friction on that small element is $$ f = \mu \Delta F = \mu T\Delta\theta $$ and the total tangential force on the element is $$ -T(\theta+\Delta\theta) - \mu T\Delta\theta + T(\theta) $$ Since the pulley is not moving, this should be set to zero by Newton's second law, and a little rearrangement gives $$ \Delta T = -\mu T\Delta \theta $$ which in the limit of $\Delta\theta\to 0$ gives $$ \frac{dT}{d\theta} = -\mu T $$ which upon integration gives the desired result!

P.S. I love Kleppner/Kolenkow don't you? I remember discussing this problem with my TA 8 years ago :)

2
How does friction between strings and pulley affect results?

1
Thermal Energy from Friction on a Rope
4
Blocks stacked on an incline connected by rope around pulley
3
Tension in a rope
3
friction of rope wrapped around a cylinder - the Capstan Equation
6
How do we prove the downwards force of a massless rope on a pulley it wraps around is $2T$?
5
Why is tension the same throughout a massless rope when the rope is curved?
2
Contact pressure - rope on pulley
0
Reason of occurrence of tension in vertical circular motion when the angle of the particle is obtuse from its initial position