Phys.org's The detection of phosphine in Venus' clouds is a big deal, and here's how we can find out if it really is life contains part of a NASA/JPL-Caltech image which is on the cover of Aerial Platforms for the Scientific Exploration of Venus, JPL D-102569

What caught my eye is the inclusion of what I assume is chromatic aberration in the rendering of what a future balloon payload in Venus's atmosphere would look like if you happened to be next to it and snapping a photo.

What I can't figure out is the ordering of the colors. The first image of the hanging payload is cropped from the bottom of the image, and the second, of the top of the balloon, is at the top. The payload shows both blue and red edges on the tops of surfaces, the balloon top only red.

I've added an annotated image indicating color of horizontal edges at the bottom of the screen; some top edges are blue, some are red, likewise bottom edges.

Do all of these color gradients in the rendering show the expected behavior for simple chromatic aberration of a single lens material, where blue light is refracted more strongly?

Being NASA-meticulous, it's possible they used a single material like sapphire or diamond for the lens in this simulation to minimize interaction with chemicals in Venus' atmosphere. 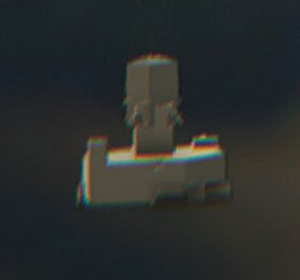 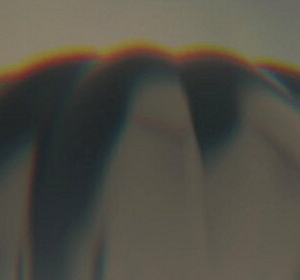 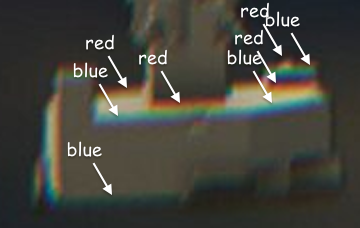 A concept for an aerial platform at Venus. Two connected balloons could take turns to inflate, allowing the balloon to control the altitude at which it floats. An instrument package would then hang from below the balloons. Credit: NASA/JPL-Caltech

I think the simulation of chromatic aberration is pretty accurate (if excessive). This blog post shows a couple of (alleged) examples of true optical chromatic aberration, and you can see the same pattern of red-orange-yellow along outward dark-to-light transitions and blue-indigo along outward light-to-dark transitions. The colors are a function of the brightness gradient in 2D, not of whether the edge is a top or bottom edge in 3D.

I doubt that this is meant to be a simulation of photography in Venus's atmosphere. I think someone just applied some stock Instagram/Photoshop filters to the image. This is for a couple of reasons. First, you can find some similar balloon renderings by the same artist without the blurring here (including one using the same cloud backdrop). They look pretty fake, and I could understand the artist or an editor wanting to add heavy post-filtering to make them look more like photographs. Second, I don't believe that NASA would send a camera with such extreme chromatic aberration and vignetting to Venus, or have any need or desire to simulate one. Even a Holga, which is pretty much the gold standard for bad optics, doesn't show as much chromatic aberration.

Not the answer you're looking for? Browse other questions tagged optics geometric-optics simulations or ask your own question.

7
Do all light rays from a point passing through a thin lens converge at the image?
1
Spherical aberration entity vs. distance from the lens?
71
Could a computer unblur the image from an out of focus microscope?
0
Determining a spherical mirror setup just from the image and object heights
1
What is the difference between longitudinal chromatic aberration and spherochromatism?
0
How do I explain the below phenomenon I am seeing along the edges of my eyeglass lenses?
0
Can a single optical device converge as well as diverge a parallel beam of light?
1
Why is this way of calculating the image distance wrong?
2
Geometric optics explanation of lateral (transverse) chromatic aberration