Can someone sketch a diagram of what this Wikipedia description is describing for the Coriolis force? I am having trouble putting these words into a mental picture.

First of all, like centrifugal force, Coriolis force is an example of a fictitious force. Fictitious is an unfortunate name that makes it sound like a "pretend" force. Fictitious forces are real. They arise when you treat an accelerated frame of reference as inertial. That is, if you are stationary in an accelerated frame of reference, you pretend you are stationary in an inertial frame. This sounds unreasonable, but is done all the time. See my answer to Man inside an accelerating train carriage for an example and an explanation.

In this case, the Earth rotates once each day. Rotational motion is accelerated motion. But we who live on the surface of the Earth think of it as inertial, as stationary. The acceleration we experience from traveling in a circle once per day is small, so we usually don't notice it is present. But if you travel a large distance quickly, you would notice the effect.

It is simplest to start at the North pole. This place is stationary with respect to the center of the Earth. Look down on it from above. Imagine that it is covered with smooth frictionless ice. You push a rock south, say at 10 mph. From the rock's point of view, the ground is moving north at a constant speed of 10 mph.

Wait until it has slid to a point 100 miles from the axis of the Earth. Since there is no friction, the rock continues to slide straight south at constant speed. But the earth rotates under it. The ground travels eastward in a circle each day. The circumference is about 628 miles, so the speed is 628 miles/day or about 26 mph. The rock still sees the same northward component of the ground's velocity. But the ground has gained a sideways component too. The ground is accelerating in an eastward direction. As the rock continues southward, the sideways velocity component will grow.

From this point of view, the rock has accelerated. It started off going straight south at a constant speed. It has now acquired a westward component of velocity, and is traveling southwest. It has curved and sped up.

This is the Coriolis acceleration. It is real. A person who treats the earth as stationary is ignoring his own real acceleration. When he sees an object separating from his fixed position at a non-constant rate, he sees the object accelerating. He really will see the rock slide by at about 28 mph.

Switching viewpoints like this sounds incorrect, but it is a perfectly reasonable thing for him to do. He sees the earth is fixed. A nearby tree is fixed. Their velocity is 0. A nearby polar bear is walking at a constant speed. It is easy to keep track of the polar bear this way. It is harder to realize that he is traveling in a circle, the polar bear is traveling in a more complicated way than that, and to calculate the relative velocity between himself and the bear.

An object that is accelerating must be accelerating because of a force. The name of this force is the Coriolis force. You can see where the name "fictitious" comes from. But it is real. 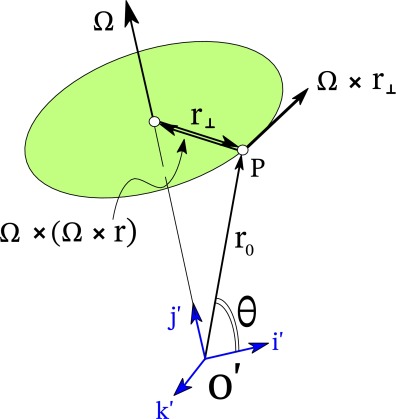 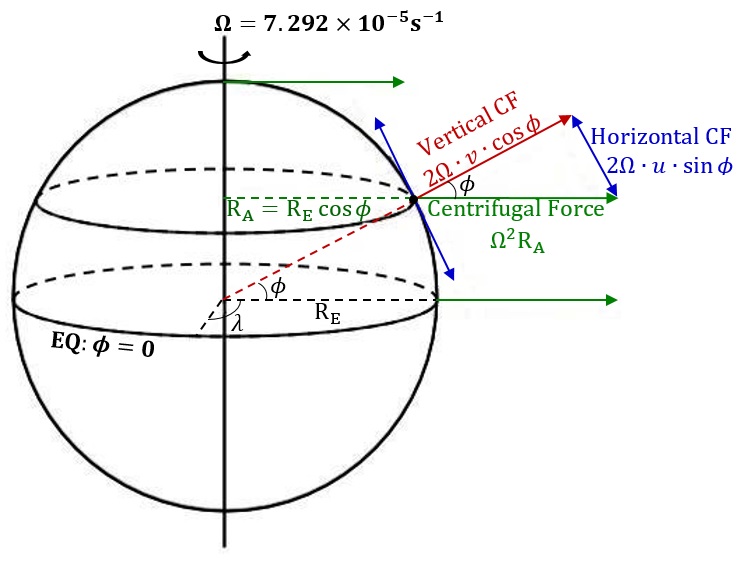 You can look and think about these two images and see if it makes the Coriolis force a little easier to comprehend.

Not the answer you're looking for? Browse other questions tagged reference-frames vectors coriolis-effect or ask your own question.

6
Can imaginary (illusionary) forces cause acceleration, and what exactly are they?
7
Does the Coriolis force act on all objects?
8
Velocity in a turning reference frame
6
How do observers in inertial frames explain fictitious forces?
2
Centrifugal Force: Why is it so real even from non-inertial frame?
2
How does an observer outside an accelerating body rationalize the effects of pseudo force?
-2
Is magnetic force pseudo?
2
Do you experience no centrifugal force when in orbit?
0
Does Coriolis effect change the direction of an object moving parallel to equator, say along the tropic of Cancer?
1
How is the spin of hurricanes explained from an inertial frame?
See more linked questions