I have a question about the really meaning of the fine structure constant. Actually, my doubt is why the physicist look to a meaning for this constant. I understand the difference between this constant and the ordinary constant, that is, it carry no units with it. But is not this just like pi or euler number? It sometimes appears in physics situations too, without units, but nobody looks for its "meaning" as much as looking for that of the fine structure constant (As Far As I Know). As we can just sit and accept the importance of pi, the importance of euler number, why we need to find a meaning to the fine structure and not just sit and accept its importance too?

Mathematical constants such as $\pi$ and $e$ have values that are determined by their definitions. For example, you can define $\pi$ as the ratio of the circumference of a circle to its diameter, and then use this definition to calculate $\pi$ to as many decimal places as you want. Constants like this cannot have any other value than the value they have.

By contrast, we know of no reason why the fine structure constant has the value it has. And we can imagine a universe in which it has a different value. So this leads physicists to wonder why it is approximately $1/137$ instead of, say, $1/140$, or something much smaller or much larger.

In short, dimensionless physical constants are not mathematical constants. Or at least they aren’t in our current physical theories. Instead they are simply parameters of our models.

Distinct from $\pi$ and $e$, the fine structure constant does not have a meaning defined simply in terms of mathematical formulae, which are valid without reference to physics or indeed to anything outside of mathematics. In quantum electrodynamics the likelihood of an interaction between a photon and an electron, as represented by the Feynman diagram 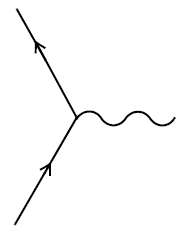 is determined by the coupling constant, usually designated by $e$ (clearly not to be confused with Euler's number). The fine structure constant is given (in natural units) by

The parameter that controls the strength of a force is something we can derive from measurements, and it has many implications for how things around us behave, but at the end of the day if it was a slightly different number, QED wouldn't be a very different theory.

First, I would argue that $\pi$, in fact, does have a meaning, and an explanation as to its value. The ratio of a circle's radius to its diameter is dependent on the curvature of the space that the circle is occupying. The $\pi$ that you're used to is the value for space with zero curvature; if the space is strongly postively or negatively curved, the value of that ratio will be a different number. Try drawing a circle on a globe - the circumference of that circle will be smaller than $\pi$ times the distance from one side of the circle to the other.

This means that measuring the ratio of a circle's circumference to its diameter tells you something about the curvature of the space you're living in. So the value of $\pi$ does have a specific meaning and explanation - the measured value is explained by the fact that the space we live in is locally well-approximated by a "flat" space, without any strong curvature.

Euler's number also has a meaning and explanation: we first discovered its value when we started playing around with compound interest. It was eventually discovered that if you started compounding the interest faster and faster, in smaller and smaller increments, the amount of money you had was described by an exponential function with $e$ as the base. Since then, $e$ has been associated with continuous processes, and often when converting a discrete process into a continuous one, you'll encounter $e$ somewhere. Its specific value depends on our definition of the derivative, but the fact that we see it so often in our measurements means that natural processes are often well-approximated by continuous processes.

Getting back to the main point: for a long time in physics, there's been the expectation that the numbers that we come across in our measurements are not arbitrary. When we measured the emission line spectrum of hydrogen, we did not stop there and say, "Well, we have these arbitrary frequencies that hydrogen emits, things must just be like that." We looked for a model to explain where those frequencies came from. Eventually, we came up with a simple formula that predicted all of the spectral lines using only a single constant, the Rydberg constant.

We could have also stopped there, saying, "Well, the Rydberg constant has this arbitrary value, and that's the end of discussion," but we didn't. We expected, again, that the value of that constant had some deeper explanation, and wasn't arbitrary. It turned out that we were correct again: the Rydberg constant has the value it does because its value is set by a quantum-mechanical model of the hydrogen atom, which only depends on such fundamental things like $\hbar$ (the conversion factor between energy and angular frequency), the fundamental quantum of free charge (i.e. the charge on the electron), the mass of the electron, the permittivity of free space, and the speed of light.

Even then, we continued to expect that those constants had some deeper explanation. Some of them are fairly shallow - for example, the value of $\hbar$ is simply the result of the fact that our "human" units of energy and time are not really compatible with each other. In more "natural" units, the value of $\hbar$ can be set to one. Similarly, the value of the speed of light, and the permittivity of free space, are artefacts of our units for distance and time not really being compatible, and their values can also be set to one with a more "natural" choice of units, where mass, energy, time, and distance are all the same unit and intercompatible with each other.

So now, in the present day, we have some constants, like the above Yukawa coupling strength and $\alpha$, which might seem arbitrary. But every time we encountered a seemingly arbitrary constant in the past, there was always some deeper explanation for why it had the value it did. Is it possible that there just isn't such a meaning for these constants this time? Yes, it's definitely possible. But based on our past experience in science, there is no reason to expect that to be true.

For a recent first principles derivation of the fine structure constant, from trace dynamics and the exceptional Jordan algebra, please see

Division algebras, and in particular the octonions and the exceptional Jordan algebra, very likely bear a connection to elementary particles, as evidenced from the research of several physicists. On the other hand, the theory of generalised trace dynamics develops a prespacetime prequantum unified theory of the four fundamental interactions. This theory lives on an eight dimensional octonionic space. It's coupling constants are likely determined by the algebra of the octonions. In particular the asymptotic value of the fine structure constant, the famous 1/137.something, has now been derived from the characteristic equation of the exceptional Jordan algebra, in conjunction with the trace dynamics Lagrangian.