Ask Question
Asked 5 months ago
Active 5 months ago
Viewed 43 times
1
$\begingroup$
Closed. This question is off-topic. It is not currently accepting answers.

It's my understanding that many inverse-square laws can be explained as a central point emitting "interaction rays" in all directions equally. And that when another object with some area is "impacted" by those rays, it will then feel an effect proportional to the amount of rays that hit it. This amount can be found geometrically to be the inverse-square of the distance between the objects.

These laws are often used to predict the behavior of tiny particles like electrons, protons, etc. Some of these objects are sometimes conjectured to be point particles.

But then they would have no area. Which means that no matter how close or far they were to the central emitter, they would only ever be hit with a single ray. And the inverse-square law would not be observed. Interaction would be the same at all distances.

Does this mean that particles that follow inverse-square laws cannot be points? That they must have some non-zero area, no matter how 'elementary' they may be?

The language of "interaction rays" is wrong and conceptually misleading, but there is just enough validity in the question to be worth an answer, at least in so far as quantum electrodynamics is concerned (gravity is understood as a geometric effect, and the idea has no application there). The electromagnetic force is transmitted by photons (conceived as massless "point" particles, not rays). We can represent the transmission of a photon from a charge to a spherical surface centred centred on the charge in this diagram. 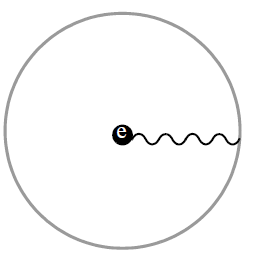 Since the photon may land randomly anywhere on the surface, the force transmitted by many photons to each part of the sphere is inversely proportional to the area of the sphere.

This is contrasted in qed, in which the force is transmitted by gluons and the gluon-gluon interaction is also taken into account. 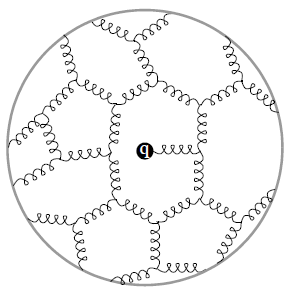 The result is that the strong force does not decrease with distance, resulting in quark confinement because energies would rise to the point of particle creation when quarks are separated (e.g. by collisions in high energy scattering).

Not the answer you're looking for? Browse other questions tagged newtonian-gravity gauss-law geometry coulombs-law point-particles or ask your own question.

41
Why are so many forces explainable using inverse squares when space is three dimensional?
2
Force inversely proportional to the squared distance
1
How can spatially extended objects behave like point particles?
0
If the electrostatic Coulomb force followed inverse cube law, what's implication on Gauss' law?
0
Why the continuous arrangement of point masses (particles) at infinitesimal separations leads to a extended system?