Why a scalar with negative value changes the direction of a vector when both are multiplied?

Vector spaces are defines on a field where those scalers comes from and in your case real numbers are the field and if you multiply any vector, scalars scales the components of the vector on the axises defined. If you multiply these components with any scalar that will scale all the three components. Basically scaling doesn't rotates the vector it simply scales the vector along a line such that, assume you have a vector where tail is on the origin and when you scale this vector with all the real numbers your vector's tip will draw a line where you can simply think as scaling pulls or pushes the vector along the direction of the vector. Also, turning back to field definition where scalars come from, in your case real numbers are the scalars and also real numbers are a vector space in itself and each element is both vector and scalar so, in one perspective scalars have direction but on the other hand when multiplying it to vectors in three dimensions you are doing matrix product where the scalar placed on the right of the vector. So, you can think scaling as a matrix product which means a scalar is a transformation matrix (standard matrix) but it's geometrical interpretation may differ for different vector spaces. 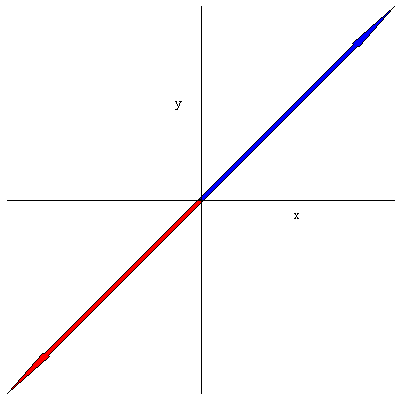 thus you have to rotate the blue arrow by $2\,\pi$ radiant to obtain the red one.

Not the answer you're looking for? Browse other questions tagged vectors or ask your own question.

0
Vector Isolation/ Rotation
4
What is the physical interpretation of the dot/inner/scalar product of two vectors?
0
Finding the Direction when resolving a Vector
3
Heuristic explanation of the difference between vectors and scalars in physics
0
If a force is a vector quantity, thus having direction and magnitude, why do we express pounds/newtons, a unit of weight, as a scalar?
73
Is weight a scalar or a vector?
1
Suppose there is a vector $\vec v$ which is a function of time, then will $\dfrac{d}{dt}|\vec v|$ be a vector quantity or a scalar quantity?