When a block of mass m is suspended by vertical spring system,it for sure perform SHM in the absence of damping force,only force which act on the system is internal which is -kx, where k is spring constant,so well so good but there is external force on the system which is gravitational force, which is mg (where g is acceleration due to gravity, for good approximation near earth's surface) which always there on the system towards vertically downward direction.

so what is this force {gravitational force} we should consider of, is it applied force on system to have forced oscillation or damping force ?

If it is applied force then it must be periodic and varies as time passes,but it isn't. A follow up question is that is applied force can be constant throughout to have forced oscillation ? ,if that so,then sorry for the above part !! Then another question arises, On considering this fact as mg act always vertically downwards,Then oscillation with constant amplitude therefore,not sustained,and this situation only arises when damping force is there,but we aren't consider this force to be damping one ?

so if we consider gravitational force then what this force actually doing is in SHM ??? 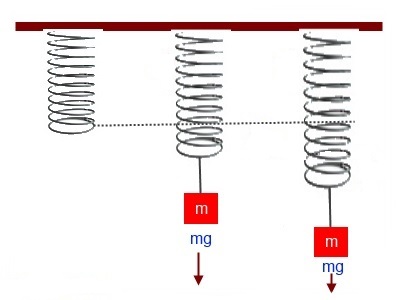 With a mass hanging on a spring, the only effect of gravity is to determine the rest position. Damping is caused mainly by friction with the air which is always opposite to the direction of motion, and possibly to heat generated in the spring as it undergoes flexing.

Not the answer you're looking for? Browse other questions tagged forces harmonic-oscillator definition frequency oscillators or ask your own question.