Can you explain the meaning of buoyancy, written here?

I got this Archimedes' principles from a website named smithplanets.com

If you can give any mathematical proof it will be amazing, by the way I just need an clear and cut explanation to this.

See if the object is floating on the surface of a liquid then it is not completely necessary that the object will displace liquid equal to its volume. Refer the figure below 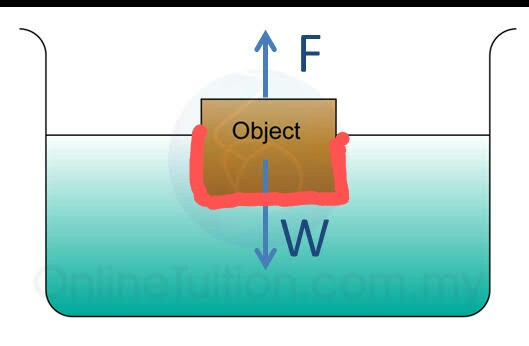 Now if the object is completely immersed in the liquid and still hovering somewhere in the tank i.e. it didn't reached to the bottom of the tank , this means that it had taken all the space that it should take i.e. its volume and the force which it experience is now the weight of the displaced liquid . If that buoyant force is greater than the weight of the object then it will again come to the top surface of liquid but if it is less then it will sink . If it is at the bottom of the tank then it experiences one more force the Normal Force due to the tank and hence comes at rest.

The second part is very easy, the object just takes the place of the water it displaces For the first part: imagine an about of water of the man of the object. this water stand at its place not moving up- or downward, do the forces of the surrounding water keep it there. Now replace it with your object of the same mass, the forces are the same and keep it there. the explanation withe the pressure the water has at different depth is a little more complicated but easy, if you take a cylinder or another object with straight walls.

The wording leaves a lot to be desired, in my opinion. Where did you get it? Per Wikipedia:

"Archimedes' principle states that the upward buoyant force that is exerted on a body immersed in a fluid, whether fully or partially submerged, is equal to the weight of the fluid that the body displaces".

The first statement makes no sense since mass is not weight.

The second statement also doesn't make sense because it doesn't necessarily have anything to do with buoyancy. For example, I can forcibly keep the object submerged in which case the volume of the water displaced will obviously equal the volume of the object. But if I have to forcibly hold it down, if I let the object go it would pop up an float partially.

The degree to which an object will float, either partially or completely, will depend on its density relative to the fluid. In order for the object to float (be in equilibrium), its weight must equal the weight of the volume of water it displaces. That is, the upward buoyant force exerted by the liquid on the object has to equal the downward weight of the object. Mathematically

If the densities of the object and liquid are the same, the upward buoyant force will exactly equal the total weight of the object, i.e., the object will float completely submerged.

Not the answer you're looking for? Browse other questions tagged newtonian-mechanics water fluid-statics free-body-diagram buoyancy or ask your own question.

4
Why is Buoyant Force $V\rho g$?
2
Why won't a block less dense than water fully submerge?
1
why does an object float in the centre of water?
0
Is the buoyancy force independent of the location of the object in the fluid?
1
Why does oil float on water?
3
Can the formula of buoyancy be used in this arrangement?