Is mass gained from the fusing of two nuclei with nucleon numbers higher than 56?

This means that because the binding energy has decreased, the mass defect must have also decreased which therefore means that mass has been gained.

Oh also! I just figured out why I am not understanding! So the basic laws of conservation of energy state that energy cannot be destroyed or created... and so where does this energy come from in order for the mass to be gained?

Thanks for any help!

This is the binding energy curve: 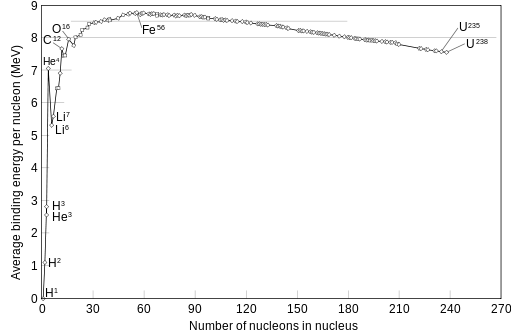 So when both nuclei have a nucleon number over 56 and are fused together, the product nucleus must have a binding energy which is less than the binding energy of the two lighter nuclei.

you should add per/nucleon . OK, lets take 56+57. That makes 113 nuclei, Nihonium an unstable elemen, breaks up to nucleons with higher binding energy per nucleon, i.e. energy is released.

Are you confusing energy per nucleon to total binding energy?

This is not exothermic, it will not release energy. It requires energy in order to get it to happen and create that extra mass.

Another way of thinking about this is to imagine you have a bag of nucleons and you allow them to form whatever nuclei they like. The way this would happen is so that the total energy density of the material in the bag is minimised. This will happen when the (negative) binding energy per nucleon is maximised. i.e. The nucleons will tend to form nuclei at the peak of the binding energy per nucleon curve. To split these nuclei up, or to fuse them together to make heavier nuclei will cost energy.

Note though that there is a further problem that is not obvious from the binding energy curve. As nuclei get heavier, the most stable n/p ratio increases (this is because of competition between the strong force acting between adjacent nucleons vs Coulomb repulsion affecting all the protons in the nucleus. But fusion of nuclei will conserve both the number of protons and neutrons separately. This means the nucleus that is produced by fusion of two nuclei with a mass number of about 56 will not be the most stable nucleus at a mass number of 112, it will have far too low a n/p ratio and a much lower binding energy per nucleon as a result. Thus the effects discussed in the first part of my answer are exacerbated by this and make it even harder and more energetically unfavourable to fuse two heavy nuclei together.

Not the answer you're looking for? Browse other questions tagged energy particle-physics nuclear-physics mass-energy binding-energy or ask your own question.

11
How to explain $E=mc^2$ mass defect in fission/fusion?
3
Nuclear Binding energy
0
Where does energy come from in fusion/fission?
0
If binding energy (from mass defect) is essentially the strong nuclear force maintaining the nucleus, why is it released?
0
Fusion Kinetic Energy
1
Why is there a link between binding energy per nucleon and fission energy?
2
Why does nuclear fusion not occur with nuclei with a nucleon number higher than 56? Please tell me if I am correct