About reflections between two mirrors, can the reflection be prevented from getting smaller using a bulging shape?

It seems its author ceased to visit SE since April so they will probably never answer my comment. So I am asking a question here.

The answerer says that the reflection between two mirrors parallel to each other will keep getting smaller and smaller.

And it's true, I've seen it with normal mirrors, that is flat ones.

But is it not possible to shape the mirrors so they do not make a smaller reflection?

I believe if the mirror is bulging toward the other one, it will expand the picture radially. So a round reflection could go round between the mirrors without losing its dimensions... or not?

Note: this question is not about the possibility of "infinite" reflections. It is just about a few reflections that would keep the picture's dimensions unchanged or not.

Lasers have this problem. The beam bounces back and forth between two mirrors in the laser cavity. One mirror is totally reflecting, and the other perhaps 99% reflecting so some light can get out. This makes the laser beam.

Inside the cavity, light must traverse the same path over and over without shrinking to a point and without growing wider and wider. The cavity must be stable.

Ray tracing would show that parallel rays and flat mirrors are what you need. But that does not account for diffraction. Diffraction makes a beam spread out after it passes through a pinhole. It also makes a beam in a finite diameter cavity spread out.

For this reason, sometimes one of the mirrors is slightly curved to focus make the beam slightly convergent. If designed correctly, by the time it gets to the other mirror, diffraction has spread it out to a plane wave. In other designs, both mirrors are curved.

If you solve the wave equation for light given the constraints that the wave front is planar or spherical at two mirrors, you find that this affects the intensity of the beam as well. The beam is most intense at the center and falls off with a Gaussian profile as you approach the edge of the beam. This is why most lasers produce a Gaussian Beam.

Note that lasers avoid a shrinking beam. But they also avoid making an image.

However, this isn't exactly the same as the problem you were talking about.

You can use curved mirrors to magnify an image. But you have a succession of images where each is farther away than the previous. So no, you can't make them all the same size.

When you look at yourself in a mirror, you see the same thing as if you were looking at yourself standing behind a window.

The third, 4th, etc copies are farther away still, and therefore smaller still. 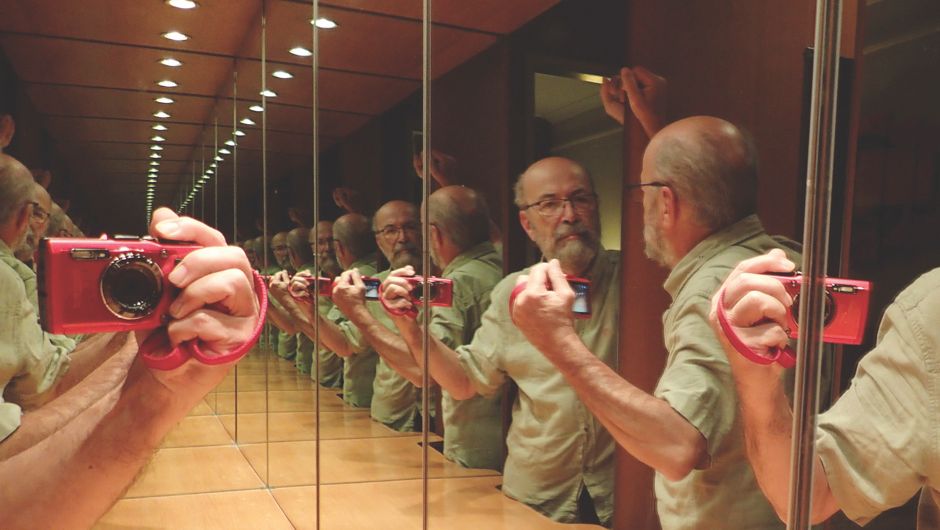 This image is from https://www.sciencefocus.com/science/do-two-mirrors-facing-each-other-produce-infinite-reflections/

Not the answer you're looking for? Browse other questions tagged reflection or ask your own question.