What causes the non-arrival of the signal of my remote (infrared) control device for our TV? 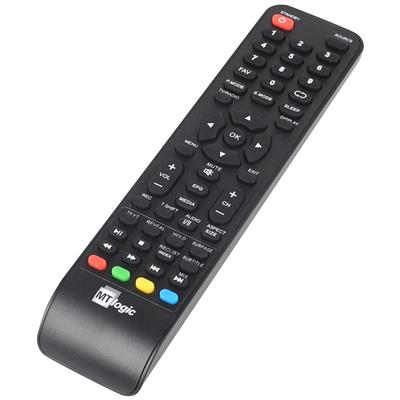 It's obvious the signal doesn't reach the TV when the object is present. How can this be explained? I tried to do this at every angle (at the same distance though), horizontally as well as vertically, the device always directed towards the TV.
The object I placed first was a metal bottle. With a plastic bottle, the effect didn't occur just as it didn't with a glass bottle. Or aluminum foil, or a piece of paper. Toilet paper was the exception to the rule.

So the fact that the (hollow) object is made from metal is clearly of importance.

-Is the signal simply blocked (even though the object is made out of metal)?

-Does the object cause a disturbance?

-Is the signal reflected?

What's the answer? I guess the IR radiation is simply absorbed or reflected by the metal. Which might be the case for the other materials too?

Is it possible to do an experiment to show how much the IR beam diverges? E.g. by measuring the distance for which the remote control works again (in combination with the diameter of the object placed in the way)? What would be he associated formula?

Just for fun (thanx to a comment), I made a little video of the IR radiation coming from my remote control. I don't understand why it's white though. But that's a technical question, not suited for this site.

A typical remote control uses an a small near-infrared light to communicate with the receiver. There are materials that are transparent to infrared light and opaque to visible light and vice-versa, but near-infrared is very similar in wavelength to visible red light, so for the most part the remote control will not work if something you can't see through is in the way.

Not the answer you're looking for? Browse other questions tagged home-experiment signal-processing or ask your own question.

1
What creates the differences between the two channels of a stereophonic signal?
2
Why are only some portions of the EM spectrum able to pass through a metal dog bowl?
0
what does the “T” really represent in the signal power equation
1
Why non-linear fiber capacity limit decrease for higher signal-noise ratios?
0
What influences the variance of signal transmission speed?
5
Why does my cell phone still work inside a metal box?
0
What could be the meaning of “illuminance” in this home device?