Why does holding a hot object with a cloth make it feel less hot?

Let's say that I held a hot object with a warm cloth. It instantly feels less hot and only warm to the touch. This is because the cloth is an insulator and doesn't allow as large a heat transfer as if I held the object with my bare hands.

However, I presume that eventually the cloth will reach the same temperature as the object in question when it reaches steady state. In that scenario, the same amount of heat must be transferred from the object to my hand as before. So why can I perpetually hold, say, a hot pan with oven mitts without burning my hand?

Your body’s circulatory system is removing heat from your hand inside the oven mitt. This makes your whole body act as a radiator to dissipate the slight temperature increase in your hand and keep the temperature from rising too much inside the mitt. The mitt acts as an insulator and slows the heat transfer into your hand to a rate that can be radiated by the body.

If the system were closed, then it would eventually heat up inside the mitt, as you suggested. An example of this is firefighters. They wear insulation all over their body and go into burning buildings. But they are super quick because unless the insulator is perfect, which it isn’t, they will eventually cook to death as the inside of the suit warms up. Despite using really good insulators! If there’s nowhere for the heat to escape, it will eventually heat up.

So your mitt isn’t even close to what firefighters use, but you can hold a hot pot forever because your body is given enough time to remove the heat without getting burned.

I'm not entirely convinced you will be holding the pan long enough for the mitts to actually reach the same temperature as the pan, and I'm not sure you could hold it indefinitely, but let's ignore that here.

This is because the cloth is an insulator and doesn't allow as large a heat transfer as if I held the object with my bare hands.

It's still this reason here. A good way to think about this is a limiting case where an object cannot transfer any energy at all. Then it doesn't matter what its temperature is, you would still never feel anything from it.

You can't "perpetually" hold a hot pan with oven mitts without burning your hand. The issue is how long it will take. Oven mitts enclose a lot of air, whose thermal conductivity is low, and are thick, also lowering the flow of heat. If the heat flow is ~10000x less than it would be, for example, through a piece of aluminum foil, it may seem like no heat is flowing, but that is not the case.

What a great question! You are asking a question about the subfield of transport phenomena and so it can be worthwhile to have some models.

So the first thing is linear heat flow, when you make contact with a surface there is a parameter $c$ such that the heat transfer is $p~(T_{\text s} - T_{\text{you}}).$ Heat is a flow of energy which is a conserved quantity, you can think of it as a “stuff” for many practical purposes. The relationship between energy and temperature can be thought of in terms of a specific heat, $E=E_0+s~T$ where $E_0$ is the energy extrapolated back to whatever you set as temperature $T=0$. Then it turns out that we do not care about the exact value, just do the analysis in terms of $u=E-E_0=s~T$ and your heat flows directly impact $u$ so who cares what units of temperature you use or what $E_0$ actually is.

So the most important thing your glove does is, it adds steps that are poorly coupled together in terms of how they share energy. Even a glove which consisted of a thin layer of metal that you touch, touching a thin layer of double-sided skin on the outside, so that $c_1=c_2=c_3$, would cut the heat transfer to your skin by around 67%.

Then if one wants to go further one defines $$\vec x = \vec T - \vec T_{\text{ss}}, \\ \frac{\mathrm d\vec{x}}{\mathrm dt}= \mathbf S^{-1} ~\mathbf C~\vec x $$ So one then diagonalizes $ \mathbf S^{-1} ~\mathbf C$ and assuming all of the eigenvalues are negative, one sees an exponential decay to a steady state dominated by the largest (or, least negative) eigenvalue. Or one notices a discrete second derivative hiding in the expression above, $$\frac{\mathrm d^2 T}{\mathrm dx^2}\approx \frac{T_{x - \Delta x}+ T_{x + \Delta x}-2T_{x}}{(\Delta x)^2},$$and one develops a diffusion equation for a continuous object, or so. There are lots of little bits of transport phenomena that keep recurring over and over in different fields of physics.

Before attempting to answer this question, we need to be able to answer the question "how hot does something have to be to cause a skin burn injury?" The answer is it depends on the combination of the temperature of the surface of the skin that results from touching the object and the exposure time at that temperature as discussed below. These, in turn, depend on other factors.

The first figure below is from a landmark study of thermal injury. (Moritz, A.R, Henriques F.D. Jr. (1947), Studies of Thermal Injury: II. The Relative Importance of Time and Surface Temperatures in the Causation of Cutaneous Burns. American Journal of Pathology, 23, 695-720). The figure shows the thresholds of reversible and irreversible skin burns as a function of skin temperature and duration of exposure.

The greater the thermal inertia of the material the greater its burn potential for a given pre-contact temperature. (A closer look at the individual components of thermal inertia shows that, for practical purposes, thermal conductivity is probably the main driving factor.) To look at the effect of thermal inertia, refer to the second figure below which is based on the work of Alice Stoll et al. (Stoll, Alice M., Piergallini John R., Chianta, Maria A. Thermal Conduction Effects in Human Skin:I, II, and III. Report Nos. NADC-79033-60, NADC-79034-60 and NADC-79036-60 15 January 1979).

The figure plots material temperature vs the inverse of the square root of the thermal inertia of the material. Clearly the two metals, aluminum and steel, which have considerably higher thermal inertia than the plastics polycarbonate and polystyrene, will cause pain and blister at much lower temperatures.The 2.5 second burn threshold for aluminum (from the data behind the graph)is between 60$^0$C and 63$^0$C. Note that this is very close to the skin temperature to cause blister at 2.5 seconds in the first figure. Compare this to the 2.5 second threshold pre contact temperature for polycarbonate plastic, which is about 110 $^0$C and polystyrene plastic, which is about 120 $^0$C.

Finally, even if the object has the minimum pre-touch temperature and thermal inertia to cause a burn, it still may not have the potential to actually cause a burn because of limited heat capacity.

Consider aluminum foil. Aluminum has a high thermal inertia (high thermal conductivity). Yet you can take s sheet of aluminum foil directly out of an oven at 350 $^0$F (177$^0$C) and not even experience pain. It is because the foil is so thin, there is simply not enough thermal energy available to burn the skin. An aluminum oven rack at that temperature would result in an instantaneous burn (See the second figure below).

So now we return to your original question

Perhaps you can, and perhaps you can't. In view of the above, it depends on many factors including but not necessarily limited to (1) the temperature of the object, (2) the thermal properties (thermal inertia and heat capacity) of the object and of the oven mitt (material + trapped air) and (3) the thermal properties of the skin in contact with the mitt . Another factor is blood circulation below the skin (good blood circulation takes heat away from the skin faster).

At a minimum the use of a mitt will increase the time you can hold the object than if you did not use one. 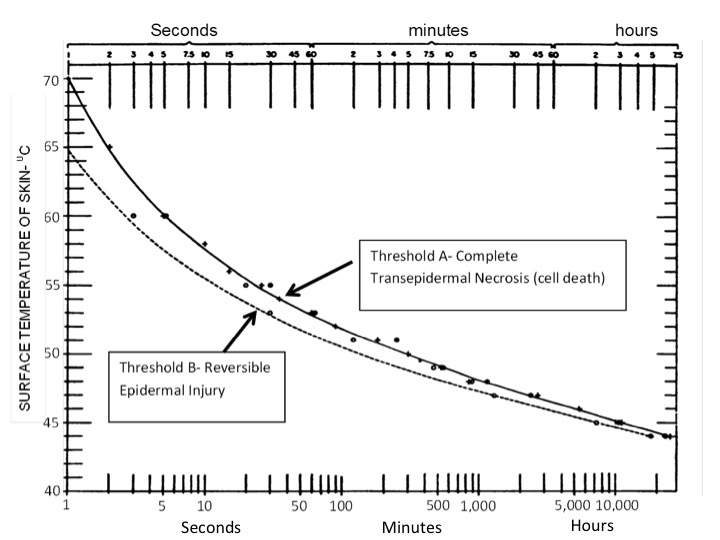 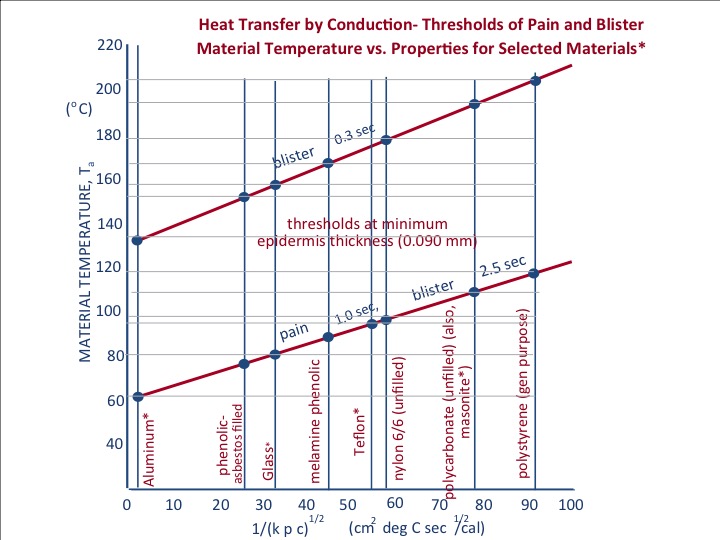 the same amount of heat must be transferred from the object to my hand as before.

No. The hot pan, when held in the air, will indeed reach ambient temperature after enough time.

But to do so, the thermal energy can either be transferred: 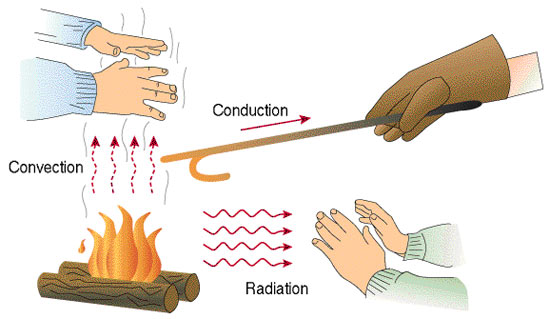 With oven mitts, you slow down the first process, which allows the hot object to cool down and reach steady state mostly via convection and radiation, without your hand getting too hot.

Depending on the pan and its content, "perpetually" could simply be a few minutes until the pan is cold enough to not be painfully hot anymore.

Here's a similar problem with an electrical network.

You want to discharge a battery, while making sure that $I_1$ does not get too high:

tl;dr– Your hand's cooling the cloth while the hot-object warms it. The cloth will have internal temperature variation. A common steady-state assumption is constant heat flow, where your hand sinks as much heat as the hot-object gives off.

However, I presume that eventually the cloth will reach the same temperature as the object in question when it reaches steady state.

A common homework problem is this:

The resulting temperature-profile looks sorta like that between $T_3$ and $T_4$ in this image:

By steady state, I presume you mean the condition under which no heat is being transferred in the system? This will only occur when both cloth and object reach the temperature of the surrounding air. Before then, the cloth loses heat to the air while it is gaining heat from the hot object. Presumably at least half of the cloth's surface area will be directly adjacent to the air in the room, rather than to the hot object. Thus the cloth cannot reach the same temperature as the object until both of them stop losing heat to the atmosphere.

Not the answer you're looking for? Browse other questions tagged thermodynamics temperature everyday-life thermal-conductivity or ask your own question.

2
Is there an 'intuitive' explanation for "Which burns more?"

0
Thermodynamics - Possibility of Cold radiation
1
Single story, hotter outside, some shade from porch, enough to cool house with/without air flowing?
19
Why does water feel cooler than air?
6
Is a radioactive-powered hand warmer possible? Can it be made to work safely?
0
Origin of hot auras
1
Why does hot air trapped in woolen cloth move away (rise up) and thus no insulation layer form?