When particle is about to start its motion there is no centripetel force. As soon as the particle is provided the velocity, it tries to move forwrd. This forward motion give rise to centripetel force. This force is along the radius, but in shortest interval of time the particle is just forward from its initial position. This makes the angle between radius and velocity morethan 90 degrees. So there is a component of force along velocity direction. Won't this slows down the particle and makes it stop? But it is said it won't affect its velocity, How? 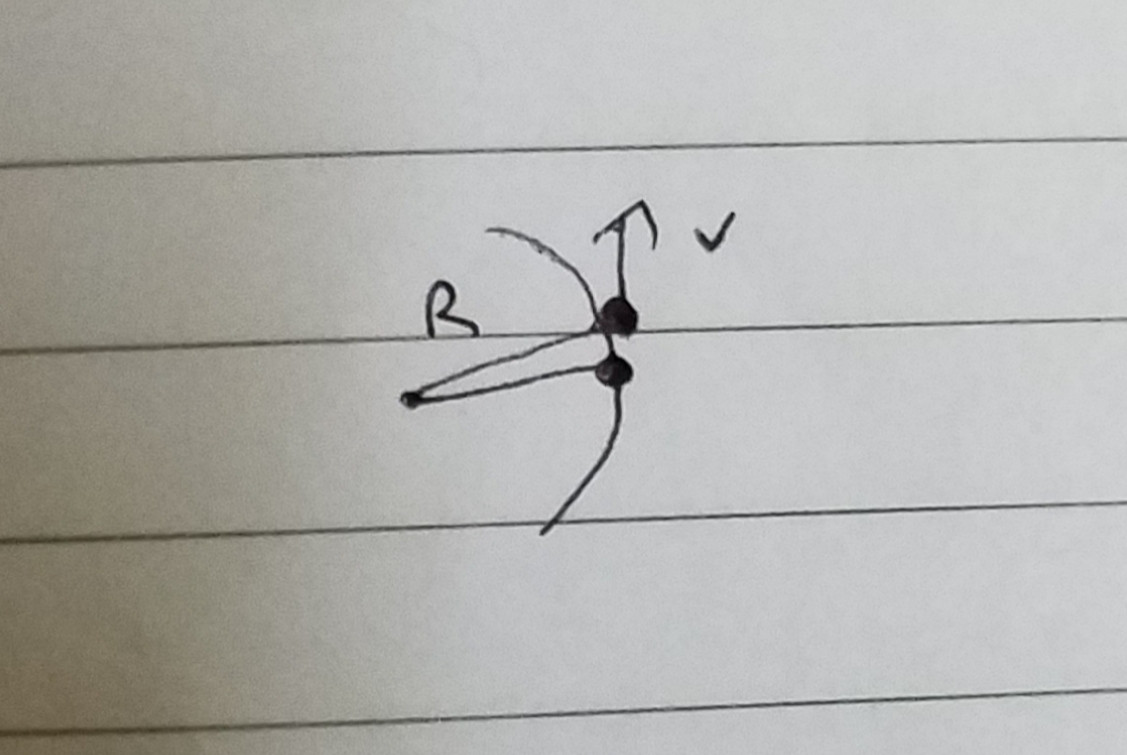 When particle is about to start its motion there is no centripetal force. As soon as the particle is provided the velocity, it tries to move forward.

So we are not talking about uniform circular motion here. There has to be some force tangent to the circular path in order to speed the particle up.

This forward motion give rise to centripetel force. This force is along the radius, but in shortest interval of time the particle is just forward from its initial position. This makes the angle between radius and velocity more than 90 degrees. So there is a component of force along velocity direction. Won't this slows down the particle and makes it stop? But it is said it won't affect its velocity, How?

And now you seem to be thinking about uniform circular motion. But more importantly, you seem to be thinking in finite, sequential steps. You are thinking "Move forward, then force reacts later, then velocity changes later." But when we think about velocities, accelerations, etc. we are thinking in terms of infinitesimal changes that then add up over time. The velocity changing and the force changing happens practically simultaneously over infinitesimal time intervals.

Usually we're talking about an "idealized" experiment. In this case you have a perfectly rigid arm connecting the "particle" to the center point. At every instant the arm exerts a force toward the axis that is of exactly the right magnitude to keep the particle moving on a circle.

You say two things that are not necessarily consistent: first "when provided the velocity it tries to move forward" then "the particle is just forward of its initial position".

The key is that the particle "tries" to move forward (i.e. it would move forward if there was no centripetal force) but the arm exerts a force toward the axis which changes the velocity of the particle. So the particle doesn't end up moving forward but rather moves in a circle.

In any real experiment you are probably right: the arm (or string, or whatever attaches the "particle" to the central axis) would stretch out a little and the particle would leave the circular path after you give it a kick. But in the idealized world we use to understand physics concepts this doesn't happen. The reaction force of the arm kicks in infinitely quickly, before the particle is able to travel forward at all.

... but in shortest interval of time the particle is just forward from its initial position.

What is the "shortest interval of time?" 1 second, 1/10th of a second? 1/100th of a second? 1/100000000 of a second? In Newtonian physics, we consider an interval of time that is infinitesimally small. The handling of this sort of thinking is actually what made Newton and Libnitz's Calculus so terribly powerful. For thousands of years, we grappled with how to calculate with infintessimally small units Zeno's Paradox is a famous thought provoker along these lines. The Calculus of Infintessimals (now just called "Calculus") was the first to resolve these issues consistently in a way which correlated to how you and I view reality.

In the calculus, the slight forward motion of the particle is captured with a variable like "dp", the infinitesimal shift in position. When we do this, we find that the effect of this forward motion on the force does not lead to a dragging effect from the centripetal effects.

Of course, don't take my word for it. That's what the calculus says will happen, if you just sit down and crunch the numbers using those rules. The thing that made Calculus famous was that the formulas that arise from crunching numbers the calculus way do indeed tend to mirror what happens in reality. You can create calculus equations that don't mirror reality, we simply elect not to teach those in physics classes. To the best of our understanding, the behavior of the world around us can indeed be modeled with calculus, if you get the right equations.

Now there is a second half to this. You talk about a "centripetal force," but how do you know it is perfectly centripetal? "Centripetal" is actually a description of the force. There is some force (perhaps the tension of a wire or gravitational attraction), and we observe that that force acts in a centripetal way.

So if you have a physical situation where this "centripetal" force is causing a dragging effect on the object, then it isn't really "centripetal." Much of engineering is dealing with this: when can we just assume that a force behaves some convenient way, and when do we have to model all the real interactions which make things fuzzy. But if we define "centripetal" in Newton's way, and turn the crank on the calculus, we find that this centripetal force indeed does not slow the object down at all.

Good physical thinking habits for the PO. Yes, if you really try to mentally "see" this classical ideal circular motion case (whether it's already in uniform circular motion case or you're talking the ball is just kicked and starting to move), you have to keep mind the string here in your picture is an "ideal" string, meaning can only provide "whatever needed" tension per Newton's law, without any normal-direction displacement, but never can be compressed (geometric "holonomic" constraint under advanced mechanics jargon). And if it's a planet gravitational case, then in the kicked case, further info will be needed to determine its final destination.

Your above mental process makes some sense which reminds me of the famous Zeno's paradoxy. But if you went through its provoking mental struggle (which is really the foundation to understand any modern calculus business IMHO), you will stop worrying about your concern in any finite time of our physical world, as @BioPhysicist described above, force and motion (force, velocity, displacement, etc) are acting on or related to the ball "simultaneously", and from calculus applied in Newton's law we can understand in any finite time of our world the point-like ball will follow a strict circular or elliptic trajectory, these are traditionally described in math department. From physics view, however, a more interesting question from here may be the "simultaneity" concept, let me explain. From a rest frame of reference like you drew above, all the tension force and ball's velocity are acting on the ball "simultaneously", but if the ball also moves fast approaching light speed relative to your background, then special relativity tells us these 2 things (force and velocity) may not be simultaneous in the usual sense from different observers in the background and the observer relatively rest to the ball. Their different observations about the same circular motion will be more interesting and hard to describe quantitatively (of course it needs special knowledge of SR).

So there is a component of force along velocity direction. Won't this slows down the particle and makes it stop?

Of course it is solved by the machinery of calculus as mentioned in the other answers. But for an intuitive understanding, we must just remember that velocity is a vector, and both the vertical and horizontal components are present.

If we suppose an initial horizontal velocity $v_h$ in a real situation, after any displacement $\Delta x$, as shown in the OP drawing, there is a small elastic displacement of the string.

The effect on the mass is a proportional acceleration, which means reducing the horizontal component (that points to the left) of the velocity from $v_h$ to $v_x$, and creating a vertical downwards component $v_y$.

The modulus of the velocity doesn't necessarily change in this process, because it is possible to $v_h^2 = v_x^2 + v_y^2$. In this case we have an uniform circular movement.

Not the answer you're looking for? Browse other questions tagged newtonian-mechanics forces vectors centripetal-force or ask your own question.