Can only an object with mass feel forces?

Find acceleration in the following system : 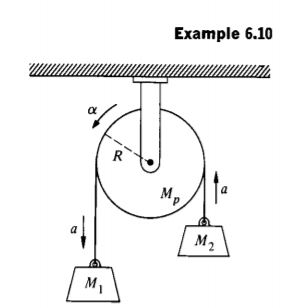 This was a solved example in the book (*) which had steps as follows:

What makes this solution hard for me to think about is that the rotation of pulley is dependent on it having mass, that is, if we took that mass of the disc tends to zero, then we would find that there is no rotation. So, do you need mass to rotate? I'm pretty sure you don't.. which I find weird or is this saying something about the physical world, that is, do you need mass to feel torques and forces unlike where particles can just move for the sake of it in mathematics?

**: due to constraint acceleration of both blocks are equal.

The phrase "a massless rope" or "a massless pulley" in introductory mechanics classes should really be understood to mean that the mass of the object is small, but non-zero. We can do this by taking the limit as $M_p \to 0$, which is effectively a sequence of cases where $M_p$ gets smaller and smaller and smaller but is never quite zero, and seeing what the behavior of the system is.

In practice, saying that an object is "massless" in a mechanics problem is really just saying that its mass is so small that it can be ignored. Functionally, this is equivalent to saying that the object has no net force and no net torque on it. This is because $\sum F = ma$, and if $m \approx 0$, then the net force on the object must be (basically) zero as well. So a "massless rope" automatically exerts the same tension at both of its ends; but if you're given a problem where the mass of the rope is not negligible, this is no longer true.

Follow-up: it's important to note that Newton's Second Law is not terribly useful for objects whose mass is "truly" zero. It predicts that such objects must experience no net forces and no net torques, and doesn't tell us anything about their accelerations (since $m a = 0$ automatically, $a$ can be any number and still satisfy Newton's Second Law.) While you can predict the motion & rotation of very light objects using Newton's Laws, you can't say anything about objects whose mass is truly $m = 0$.

The only way to make meaningful predictions about the behavior of "massless" objects in Newtonian mechanics is to assume that their mass is non-zero, and then look at the behavior of the solution in the $m \to 0$ limit. Depending on the system, this limit might be physically reasonable behavior, as it is in this case; or it might not be physically reasonable (e.g., a fixed force is applied to an object of mass $m \to 0$.)

If the pulley is massless then $I=0$ and so $T_1=T_2$ - in other words the tension is the same on each side of the pulley. This makes sense because there should be no net torque on a massless object (otherwise we would get an infinite angular acceleration, which is unrealistic).

25
What is the gravitational force acting on a massless body?
15
Newtonian mechanics: massless particles

0
Can two bodies move with equal acceleration if forces acting on both are unequal?
0
How to find a constraint equation to relate the two tension forces in this arrangement?
1
Tension direction for pulleys in connected mass systems
1
Tension and Angular Momentum Equilibrium (Exercise)