I am reading through the text "Advanced Engineering Thermodynamics" by Bejan that I found hereand have encountered a conceptual issue that I'm having trouble resolving on my own.

On page 64, Bejan asks me to consider a "batch of fluid that expands adiabatically in a piston and cylinder apparatus." The piston rod is connected to some external device that can either create or consume work. He then presents a phase-space plot of the fluid volume vs. internal energy included in this post and then makes the claim that any point at $(V_2, U_2)$ which is adiabatically accessible from the state $(V_1,U_1)$ must lie above some coordinate point $(V_2, U_{2,\text{rev}})$ defined by the special property that the state may be reached by and return to $(V_1, U_1)$ adiabatically.

It seems that Bejan even suggests this possibility as, referring to the adiabatic accessibility of point $2^{''}$ from point 1 in the leftmost graph, he states:

the end-state energy $U_2$′′ can rise above $U_1$ if, following free expansion [from $U_1 \text{ to } U_2$], the external apparatus does work on the fluid. One way of achieving this effect is by rotating the piston rod around its axis while the fluid shear integrated over the piston face opposes the rotation. In this manner, the external apparatus does work on the system, from state 2' to $2^{''}$.

In summary, what forbids the same thing from happening in the rightmost diagram from point 2 to point $2_{\text{rev}}$? 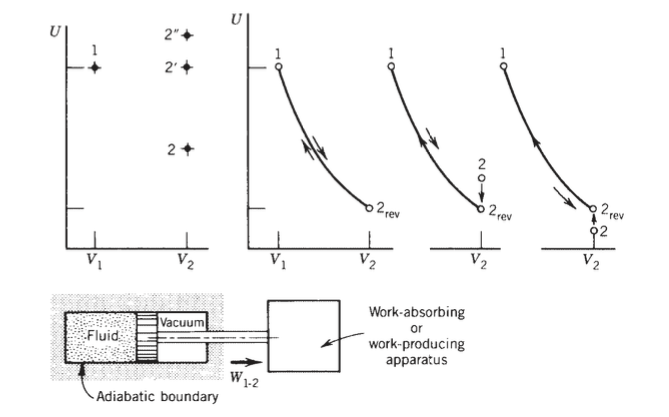 I am providing a new answer in view of the additional details you have provided and our related discussions. I have also retracted my vote to close the post.

First of all, I believe we both agree that process $2$ to $2_{rev}$ in the third diagram and process $1$ to $2$ in the fourth diagram are impossible if adiabatic, based on the first law. The issue has to do the author's claim that process $1$ to $2$ in the fourth diagram would necessarily violate the Kelvin-Planck statement of the second law and why that is necessarily so, given the possibility of adiabatic stirrer work on the fluid going from state $2$ to $2_{rev}$ as you have suggested.

To recall, the Kelvin-Planclk statement (from Wikipedia) is:

“It is impossible to devise a cyclically operating heat engine, the effect of which is to absorb energy in the form of heat from a single thermal reservoir and to deliver an equivalent amount of work”

If one assumes that process $1$ to $2$ in the fourth diagram were in fact possible, then one can device a heat engine cycle in which energy is absorbed from a single thermal reservoir and the cycle delivers an equivalent amount of net work, as follows:

After the process $1$ to $2$ expansion is completed the adiabatic boundary is removed. Then heat is transferred to (absorbed by) the fluid reversibly at constant volume from state $2$ to state $2_{rev}$. The adiabatic boundary is then replaced and the fluid is then compressed adiabatically and reversibly back to state $1$. We now have a heat engine cycle that produces net work by absorbing heat from a single reservoir during process $2$ to $2_{rev}$ in violation of the Kelvin-Planck statement.

To the above, you have raised the following question in regard to the fourth diagram:

Applying the first law to the complete cycle, we have

In spite of no violation of the second law, process $1$ to $2$ in the last diagram still violates the first law.

Bob D pointed out that stirring work is irreversible. With that insight, perhaps the following point is why my claim in the question is false:

However, because stirring work is irreversible, the counterclockwise cycle is not reversible. So we have a contradiction.

Not the answer you're looking for? Browse other questions tagged thermodynamics energy adiabatic or ask your own question.