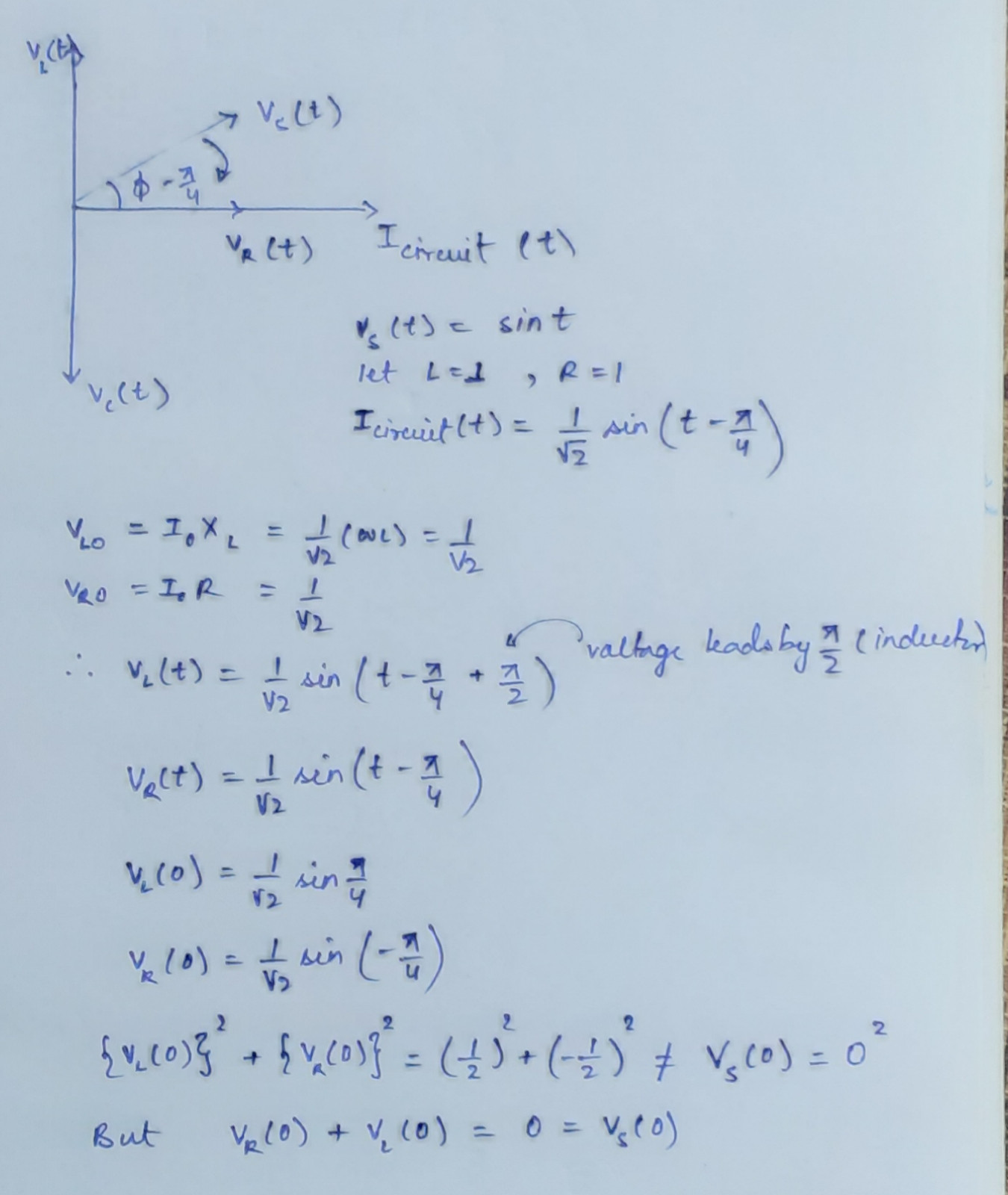 I am trying to understand Kirchhoff's voltage law in reference to AC circuits and this is a dummy problem I have solved to show my doubt.Quoting my textbook, voltages across components in a LCR circuit are phasors so they are not added algebraically but vectorially, going by the statement I could not verify the asserted statement, here in my problem voltages being added algebraically give correct result but not so when vector addition is involved, please correct my reasoning.
The notation used is very generic, shouldn't be a problem.

It seems you have some misconceptions -

1.As book suggest adding vectorially,but it doesn't mean that quantities like voltage or current is vectors rather we use a mathematical vector addition approach (for simplicity nothing more) because adding algebraically two or more sinusoids is tough job to do but it should be always in your mind that although we are using vector addition (instead of scalar addition) just to solve an algebraic addition .

3.now to your actual question , here it looks like you just randomly square two numbers thinking that they are 90 degree out phase and that would be answer but unfortunately that's not how math works ,so what we do?

Kirchoff's voltage law is applicable only DC system. You can't apply this in case of AC as the current changes it's direction depending on it's frequency. And the calculation isn't done vectorially as current is not a vector but current density is a vector. For LCR circuit using simple differential equations and proper relations between different components of the circuit you can get your results. And in diagram you've used phasor representation which is kind similar to vectorial representation as it may seems hut it's not a vectorial method. I think if you study about phasor diagrams you'll get more clear conception. Hope it's helpful.

In adding sinusoidal functions which are out of phase as in AC circuits or with wave equations, its usually possible to put the summation into a form which resembles the addition of the x components of two or more vectors to get the x component of the resulting vector. (The magnitude of a vector represents the amplitude of the function, and its angle represents the phase.) These (imaginary) vectors can be thought of as rotating in a 2D plane. It's often more convenient to work with the vectors than with the components. For that purpose, when working with an RLC circuit, the rotation of the vectors is usually frozen with the vector representing the voltage on the resistor directed along the x axis. If the vectors are visualized in an xy plane, the x components represent instantaneous voltages. If they are visualized in the complex number plane, they are handily represented by complex functions, but again in most cases, only the real components of the vectors have physical significance.

Not the answer you're looking for? Browse other questions tagged electromagnetism electric-circuits electric-current or ask your own question.