How valence electrons cross the field barrier in P-N junction?

The text from book is: 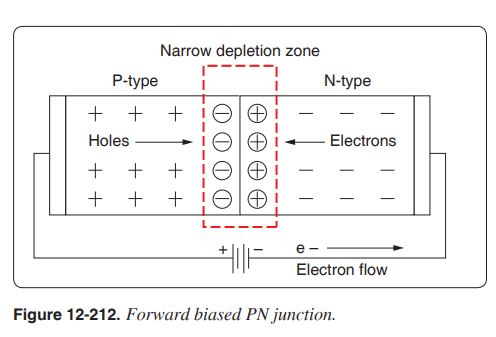 The electrons from N-type material combines with the positive ions in junction. And they become Valence electrons. But how do they cross the negative part of junction? Will not the electrostatic repulsion let it not cross it?

One solution I believe if my doubt is correct is that, the barrier electric field produced by depletion layer behaves like a battery with opposite polarity. 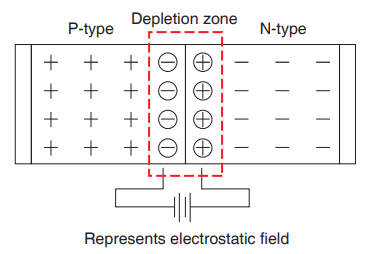 And thus the valence electron crosses because of the field and reaches to P-type material.

But this produces a contradiction when forward current keeps flowing and the depletion layer, so the barrier field, reduces after some time. Please correct me.

"The electrons from N-type material combines with the positive ions in junction. And they become valence electrons. But how do they cross the negative part of junction? Will not the electrostatic repulsion let it not cross it?"

The first sentence above is incorrect. The electron does not recombine with a positive ion. Instead, the electron falls to a missing state in the valence band (it recombines with a hole). What your text calls "becoming a valence electron". This is a culmination of the two processes:

When the electron and hole recombine in and near the depletion region they have completed the motion of one net electron moving from the right contact to the left contact. These electrons and holes move across the junction by diffusion. The driving force for diffusion, the large gradient in concentration between n and p under forward bias, is much stronger than the opposing electric field of the junction.

I would urge you to discard this text. It's teaching the version of semiconductor physics that says "there are no such things as holes". It also completely ignores diffusion in the explanation. Your question clearly points out how much confusion this approach can have.

We have had an excellent theory of semiconductors since William Shockley's seminal book:

4
How does current flow from the emitter, through the base and to the collector in a NPN transistor?
2
Question about electron-hole pair generation in depletion layer for a p-n junction photodiode
0
Why does current have to flow in the same direction?
0
How do holes move across a PN junction?
1
Potential barrier in p-n junction diode
1
Why isn't the positive side of n type semiconductor in diode neutralised by electrons on its own side?
1
In a reverse bias, why can't electrons move from the $p$-type to the $n$-type?
0
Dynamic resistance of diodes and the depletion zone