How many forces are acting on a projectile when it is passing through the highest point in the trajectory if air resistance is ignored?

This is a projectile motion question and the question basically states that an object is launched at $45$ degrees with an initial velocity of $28m/s$ east.

So, how many forces are acting on a projectile when it is passing through the highest point in the trajectory if air resistance is ignored?

According to my textbook answer to a specific question:

Okay $F_g$ is acting downwards on the object, fine I get this. But isn't the object also moving towards east at constant speed of $28\cos \left(45\right)m/s$ , so shouldn't this mean that the object also has a horizontal force applied to it?

Forces describe the change of velocity (or momentum, technically speaking) of an object. Not the current velocity, just the change. If the velocity towards east doesn't change (= is constant), then there can't be any net force applied to the object in that direction. The direction in which velocity changes is the vertical one, so the net force applied to the projectile must be in that direction as well, and gravity is fully sufficient to describe this vertical force. 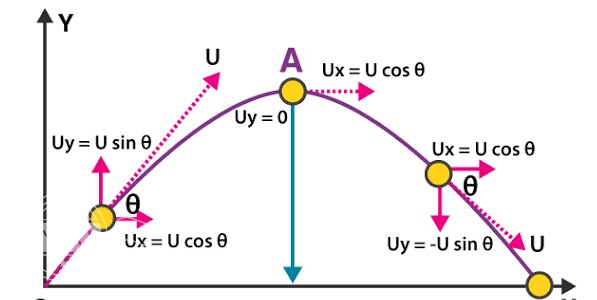 You projected the object which was at rest earlier with some velocity at $45°$ . This means you applied a force to throw the object but the moment the object left the contact with your hand, there is no force acting on it except the downward gravity and because of this force of gravity , the vertical component of the velocity given changes but since there is nothing to apply a force on the object in the horizontal direction , it's velocity in that direction doesn't change.

So we don't need to apply force to move a body with constant velocity.

The only force acting on the particle thoughout its trajectory is gravity.

Not the answer you're looking for? Browse other questions tagged homework-and-exercises newtonian-mechanics projectile or ask your own question.

1
How to find maximum velocity
1
Projectile Motion with air Resistance - Adjust only the Angle to hit a target
0
Calculate average speed of projectile with air resistance
0
Determining the angle of motion from distance and velocity data?
1
Kinematics of bouncing ball
0
kinematics - projectiles
0
Why is the velocity in the horizontal direction constant for 2D projectile motion?
0
What is the nature of the constraint acting on a projectile thrown at some angle with the horizontal surface?
0
Missing Resistance Component