How would Newton account for what Goethe called border spectra?

According to Goethe when an observer looks through a prism at a white rectangle cast against a black background two border spectra appear (one formed by a red and yellow combination of colours, the other by a violet and blue combination) due to the fact that the prism moves the rectangle from its initial position in a direction towards the apex, which in effect brings on one side the darkness of the background over the lightness of the white rectangle, and on the other side takes the lightness of the rectangle over the darkness of the background. In the first case, says Goethe, darkness over lightness creates the red-yellow combination, and in the second case (lightness over darkness) creates the blue (cyan, really) and violet one. My question is how would Newton explain the apparition of those two combinations of colours. 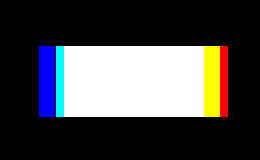 This answer provides a visualization of the answer by Claudio Saspinski. 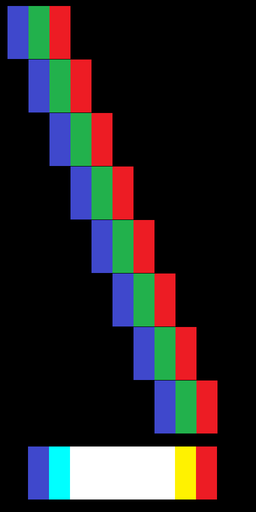 Rather than depicting a full spectrum as cast by an actual prism I have reduced the color palette to the three primary colors of additive color mixing.

The image shows a series of 8 spectra, each from a sufficiently narrow sliver.

The large rectangle at the bottom shows the resultant color effect when the effective source is the 8 slivers combined, forming a rectangular source.


I have read Goethes book on his theory of colors.
(It was many years ago. I'm confident I remember the ideas sufficiently well.)

Goethe refused to consider the possibility that when the colors of the spectrum are recombined you get white once again. I don't remember Goethe giving a reason for that, he just dismissed it.


Historical perspective:
With the technology available in Newton's time and in Goethe's time it is difficult to show directly that the colors of the spectrum, when mixed in the proportions of the spectrum, combine to white.

Newton described two methods to try and obtain some level of assessment.

Newton's setup was that he had a narrow beam of light coming in through closed shutters, and having the prism cast the light onto a wall. Newton could undo the effect of a prism to some extent by having the dispersed light traverse a second prism, the second prism in reverse orientation to the first. The cancelation isn't perfect. So the evidence from that method isn't very strong.

Newton also describes a form of color mixing that he investigated that is similar to the color mixing you get if you look at a mozaic from a distance. Newton describes that he would grind colored minerals to a coarse powder, and by adjusting the ratio of the two powders the mix of the two powders would be perceived with a paler color than either of the constituent powders.

This type of color mixing is today called 'partitive mixing'. With partitive color mixing the best possible color effect is that you obtain a grey. You can't obtain a white because the constituents of the combined powder are diluting each other.

Anyway, Goethe did not retry the things that Newton described. Goethe describes that out of curiosity he had ordered prisms, and when he received his purchase in the mail he used it to look at a large rectangle. That did not result in the spectrum as described in Newton's optics, and ever after that Goethe was convinced that with a single observation he had refuted Newton's theory of light and color.

I think that when Goethe wrote about colours, Newton was not more alive to answer. But I suppose he could say as below:

All the image of the rectangle is refracted. But each color has a different angle of refraction.

The central area is white because the bluish light coming from a point of the rectangle mixes with the reddish light from a point nearby.

But at the borders, that compensation is not possible. So one of them becomes bluish and the other redish.

40
How does gravitational lensing account for Einstein's Cross?
5
How would one generate Brownian light? What would it look like?
2
Four questions on color
0
How to account for lower tropospheric horizontal refraction
8
Is there a tunable visible wavelength optical filter for exclusively filtering intense coherent laser light?
1
Human colour perception – summary needed
0
How does the wave model of light account for absorption?
1
What causes this high frequency “noise” in HHG spectra?
2
Anti-blue light gear. Some claim to filter blue light without changing color perception. Real or fake?