Why do we hear a higher pitched sound outside the water when we smash two stones in water?

Is this because it takes more energy for the sound waves to travel through water than through air, so that the ones that we hear from outside are the ones that had higher frequencies after the collision to begin with?

Does the density of the medium that is disturbed by a rigid body collision have any effect on the frequency distribution of the sound waves that are generated? For example, does the higher "stiffness" of the cage of water molecules surrounding the stones that are vibrating mean higher frequency normal-modes?

Finally, does the refraction at the water-air interface play any role?

The frequency of a sound wave cannot change as it crosses the water-air boundary. The wavelength can, and does, change but the frequency cannot because if it did there would be no way to match the two waves at the interface. This means that the higher frequency is not some quirk of the sound propagation, but that the colliding stones emit a higher frequency when in water.

To see why this is we need to consider how the sound is generated. When the two stones collide this generates a shock wave that propagates into the interior of the stones and makes them vibrate. At the surface of the stones the vibrations propagate into the surrounding medium as a sound wave, and that's ultimately what we hear. A stone will have some set of normal modes, and the shock wave will transfer energy into these normal modes exciting them in some probably rather random way that will depend on the details of the impact. The sound we hear is the combination of the frequencies and amplitudes of all these normal modes.

The reason that the sound of the impact is different in water is simply that the normal modes of an object in a medium like water are different to the normal modes of the same object in air. This is because water has a (much!) high bulk modulus than air and the surrounding water resists being moved by the surface of the vibrating stone far more than air does. It would be a brave physicist who would predict exactly how the sound would change because this will be complicated. Vibrational modes that cause lateral displacement of the water will tend to be slowed because the water has a higher density than air. On the other hand vibrational modes that cause compression of the water will shift to a higher frequency because water has a higher bulk modulus than air.

It might be possible to calculate exactly how the bulk modulus and density of the medium affect the normal modes for some idealised object like a perfectly elastic sphere. I've Googled for such calculations but with no luck - if anyone finds a relevant link please feel free to edit it in or add it as a comment. For now all i can say is that experiment shows the normal modes that shift to higher frequency dominate the sound we hear.

Let's examine and answer each of your questions as follows.

It does take more energy to create a sound wave in water than in air due to their different densities, water being more dense and stiffer so to speak. However the energy in this case should not have an impact since the amount of energy to cause the collision of the two stones in either medium would need to be constant for this comparison to make sense. If it were not the sound generated would just be louder due to the greater energy. Additionally adding energy to a sound wave will not effect its velocity, the energy only impacts its amplitude so all waves in water will travel at the same speed even if they have different frequencies and amplitudes. The higher amplitude wave will be louder.

In a gas like air, the particles are generally far apart so they travel further before they bump into one another. There is not much resistance to movement so it doesn’t take much to start a wave, but it won’t travel as fast. 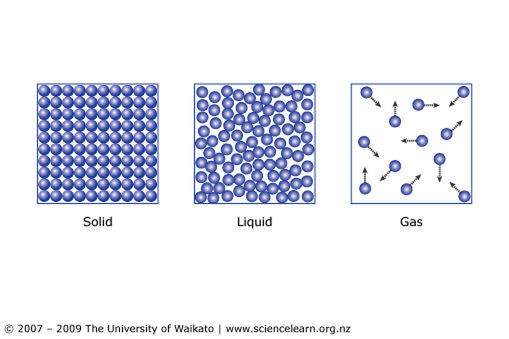 In water, the particles are much closer together, and they can quickly transmit vibration energy from one particle to the next. This means that the sound wave travels over four times faster than it would in air, but it takes a lot of energy to start the vibration. A faint sound in air wouldn’t be transmitted in water as the wave wouldn’t have enough energy to force the water particles to move.

where v is the velocity and f is the frequency. Since the frequency of the wave generated by the stones colliding in the water {at a 1 meter depth} is the same in both media, the wavelength will simply be proportional to the velocity of the wave. When the sound leaves the water the speed and wavelength both change. The sound wave will slow down in the air since the density of air is less than the water and the wave length will be shorter since the the velocity has slowed. But the frequency will not change therefore we must conclude that refraction does not effect the pitch of the sound one hears.

The higher pitched frequencies have higher energy. The path of minimal time is to the surface.

Lower frequencies naturally travel further in water despite their lower energy value. Hence the use of infrasound by whales for the purpose of long distance communication.

Not the answer you're looking for? Browse other questions tagged acoustics collision or ask your own question.

22
Why do bass tones travel through walls?
2
Frequency of a Tuning Fork
2
Why can we hear sound better on the water than on land?
0
Why we cannot hear ourselves or speak in water
0
How do we handle waves in a system with a high degree of inhomogeneity?
6
If I can hear Bob, can Bob hear me? (AKA, why does the Green's function for sound propagation have to be symmetric?)
1
Why does sound travel faster in steel than in water?
10
Why does sound behave differently in water than in air?
1
Why are higher frequencies amplified less by filling a bottle with warmer water instead of colder water?
0
Why does stepping on the floor produce sound?