We all know that when light hits a plane surface, it reflects back.

And when the light hits plane surface, then if incident angle is greater then critical angle then it reflects back into the medium, this phenomenon is called total internal reflection. 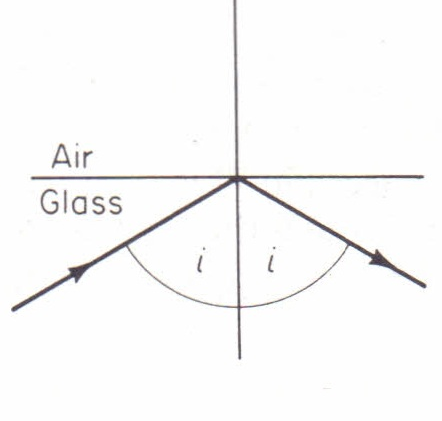 Now the thing that always confuses me is: what is the difference between simple reflection and total internal reflection? I mean, in both cases light is reflected back in the same medium. So how we differentiate these terms?

We all know when a light hits a plane surface it reflects back.

Depending on the medium, some fraction of the light reflects back. If we think of a glass-air boundary, we are used to seeing both reflections and transmitted images on a pane of glass.

In total internal reflection none of the incident light can propagate into the other medium. All of the light will either be absorbed or reflected. This makes sense if you calculate the transmission angle based on refraction. The transmission ray is prohibited.

in both cases light is reflected back in the same medium. So how we differentiate these terms?

In the case of simple reflection of an incident beam there's always a transmitted beam. It might propagate over a very short distance in the second medium due to absorption (like when the second medium is e.g. a metal), but it does propagate as the usual sequence of crests and troughs, and this propagation is definitely directed away from the surface (although possibly at an angle).

This evanescent wave is the main difference between simple reflection and total internal reflection.

No TIR and reflection are different . Reflection is bouncing back of light in same media after striking reflecting surface . But in TIR light is reflected to same media after refraction . We know that when light moves from denser to rarer media it bends away from normal . The angle of incidence in denser media for which angle of refraction in rarer media is 90 degree is known as critical angle . When angle of incidence is greater then critical angle then TIR occurs . Light bends away from normal so much that it enters in 1st media . In order to understand TIR , I suggest you see diagrams

0
What is the difference between reflection and total internal reflection (TIR)?