What is the frequency of occurrence of stellar classifications off the HR main-sequence?

An alternative version of this question would be: "if was to pick a star from the $10^{11}$ or so in our galaxy at random, what are the probabilities of it being various kinds of star?" (and I do mean "in our galaxy" and not "visible in the night sky").

There is a nice table I've seen in various places (e.g wikipedia) which goes a long way towards answering this. It tells me that 0.00003% are 'O' types and 0.13% 'B' and 0.6% 'A' through to the 76% rump of 'M types. Unfortunately there is some small print associated with that table which is that it's only for stars on the main sequence (hence its 'M' types are all low-luminosity dwarfs - red giants aren't included - and its 'A's and 'B's are all young giants - white dwarfs aren't included).

However, I've no idea what proportion of the stellar population are off the main sequence. One in a hundred? One in a million ? What I'd really like to find (or gain enough information to compile) is a 2D version of that table with the same axes as a HR diagram where I can look up the frequency of white dwarfs by looking in the cells in the A-B spectral and the luminosity 0.001 - 0.1 ranges, or the frequency of stars like Betelgeuse by looking in the M, $10^5$ cell.

(Of course another issue with the cited table is that it claims to be frequencies in "solar neighbourhood". For example it'd be nice to have different versions specific to stellar populations of, say, globular clusters, the galactic disk and central "bulge". But I'll settle for some pan-galactic numbers initially).

You could look at tools like EZ-web or interpolation formulae like those from Hurley, Pols and Tout 2000 to infer how much time a given star (say O-type) spend in a given state compared to the time spend in the Main Sequence. For example an initialy $10M_\odot$ star would spend around 25 Myrs on the main sequence and only 3 Myrs being a red giant as you can see on the next picture that I made during my PhD (in french, sorry). Stage 1 is the main sequence and stage 3 to 5 are various reg giants stages. 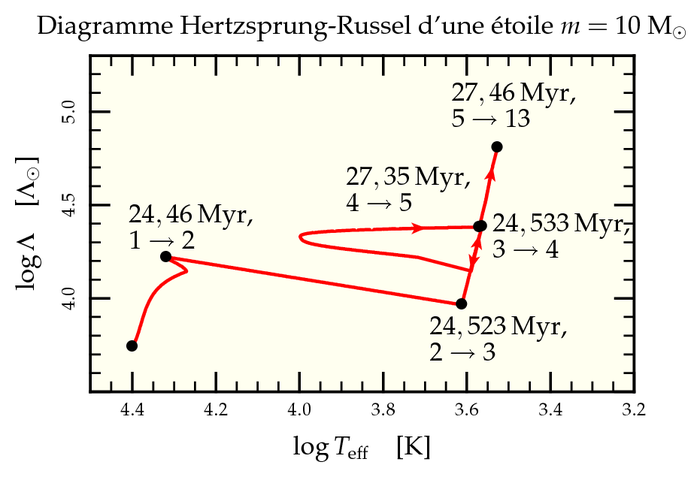 Thus you could infer that if you have found 25 $10M_\odot$ stars on the main sequence in your sample, there should be around 3 of them being red giants in the same sample (this reasoning naturally won't hold if your sample has some precise age like a star cluster for example). Knowing the probability to get a given star on the main sequence and converting it to numbers for, say, a million stars, you could know how much red giants you would expect to find in addition to this million stars.

Note that, once again, this reasoning would only hold for stars whose age span is very small compared to the age of the universe (e.g. quite massive stars).

Models are based on stellar physics that should represent quite well what is going on in actual stars (see for example Eggleton paper who wrote the code on which EZ-web is based). You will find some interesting stuff on the BaSTI homepage including bibliographic entries you are looking for. Finally, extensive comparison with experimental data have been done to ensure that stellar models reproduce some real features, for example with the Hipparcos data on the Milky Way (a very simple example on page 30 of this PhD) or with stellar clusters (that are almost isochrones, that is a distribution of stars that all have the same age, see also BaSTI isochrones for more details)

This might help. It is a Hertzsprung Russell diagram created for the closest 1000 stars to the Sun, according to the 3rd catalogue of nearby stars by Gliese and Jahreiss (1991 http://cdsarc.u-strasbg.fr/viz-bin/Cat?V/70A ). I have labelled it with spectral types.

Although this catalogue is now getting a bit dated and there are now (smaller) catalogues of very nearby stars that are more complete, it still provides a pretty good census of the relative proportions of stars in the disk of our Galaxy near the Sun.

The wikipedia results you refer to tally quite well with the main sequence stars that dominate this plot. About 6% of the sample are white dwarfs, though this might be a lower limit because the Gliese and Jahreiss catalogue becomes demonstrably incomplete for an absolute V magnitude greater than 11. Less than 1% of the sample are evolved (sub)giants. There are no red (M-type) giants, so their occurrence rate must be smaller than a few in a thousand. It is difficult to provide a larger census because it is difficult to estimate the distance to stars outside of the solar neighbourhood.

In more distant populations (bulge, globular clusters etc.) the problems can be simultaneously easier and more difficult. Often you can assume all the stars you are looking at are more-or-less at the same distance, but you have problems with contamination and also that you just can't see the faint stars. The mix of spectral types depends on (i) the initial distribution of masses for stars born in these environments and (ii) the age distribution of the population (and also to a lesser extent on chemical composition). There is some evidence that initial mass distributions vary in the bulge and globular clusters from that in the disk, and the age distributions are certainly different. But the statement that the vast majority of stars are on the main sequence and heavily weighted to masses much lower than the Sun is still true.

The new Gaia satellite astrometry mission (first results in about 2 years from now) will sort many of these questions out because it will measure the distance to a billion stars with $V<20$.

[An addendum, in the light of the comment from the question writer:

I understand the interest is in simulating the appearance of the Galaxy or at least representing its bulk light. To do this, then a modelling procedure might be the best way to go, but using a model that has been well tested against populations in our own Galaxy. A couple of possibilities occur to me.

The first is "Trilegal" - see Girardi et al. (2005) http://adsabs.harvard.edu/abs/2005A%26A...436..895G - which will simulate photometry for any stellar field by combining mass functions, age distributions and stellar evolutionary models to provide Monte-Carlo HR diagrams like the one in my picture.

The second is the Besancon Galaxy model. This again offers the possibility of generating model HR diagrams and is possibly something you could make more progress with as they offer a web interface. They also show some faked Galaxy images generated from the model which I guess is very clse to what you are trying to do... 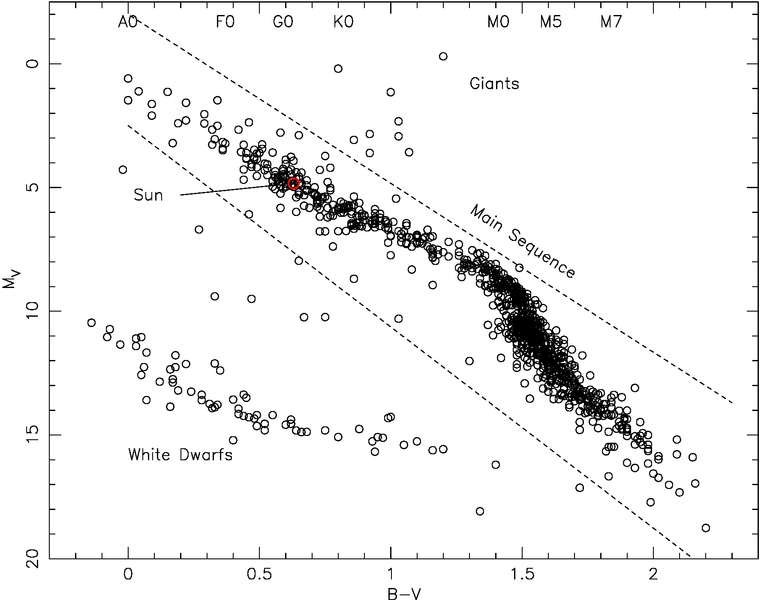 Not the answer you're looking for? Browse other questions tagged astrophysics galaxies stellar-evolution star-clusters stellar-population or ask your own question.

10
Distribution of star colours in a galaxy

1
Could a viable solar system work with a cluster of dwarf stars in center? And would it last longer than a single stellar mass star?
10
What are the demographics of stars visible to the naked eye?
0
Possible intergalactic celestial objects
0
Synthesising types of galaxies using various stellar spectra
3
Could the estimated stellar mass for the Milky Way galaxy include brown dwarfs?
5
Why are stellar clusters useful for developing stellar evolution models?
4
Different width of spectral lines for different groups of stars
1
What is the local stellar number density?
2
Is there a Mass-Temperature relationship for main sequence stars?