We know that adiabatic law for an ideal gas is,

the differential of this under constant pressure is,

Now, the pressure and volume can't be at all points in process zero, so it must be $dV$ that must be zero. So does that suggest such a process is not feasible at all? Why should we expect this physically?

The first equation you provided only applies to a reversible adiabatic expansion of an ideal gas. That can't occur at constant pressure since an expansion or contraction would require a reversible transfer of heat to or from the gas so that the ratio of volume to temperature is a constant. That, of course, can't happen if the process is in fact adiabatic.

Consider a vertically oriented perfectly thermally insulated cylinder fitted with a piston of negligible mass and area $A$. A weight of $mg$ is supported by the piston so that the total external pressure is $mg/A + atm$. The gas is initially in equilibrium with the surroundings and is therefore at the same pressure. 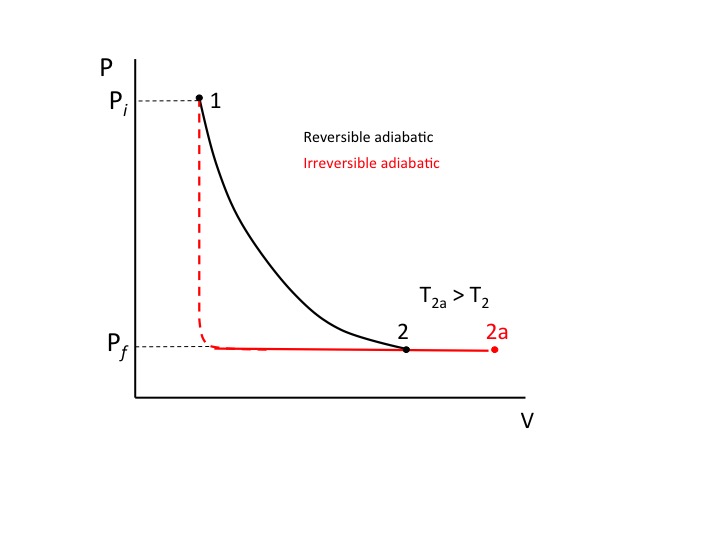 You changed the question. I will answer both.

Let us make the starting assumption that we have no "other work" present.

A reversible process is one where, by definition, the system is in mechanical, thermal, and chemical equilibrium with the surroundings at all points in time. Here, we have no distinction whether pressure means internal or external. They are the same at all points in time. Ironically, so too are the temperature and chemical potential of the system with the surroundings. We will leave this unexplored (we end with a failure below anyway).

A constant pressure process will have constant and equal pressures inside and outside at all points in time. To change $V$ of the system (expand or contract), we are left therefore with only the temperature $T$ of the system.

The only way left to change $T$ for the system while allowing $V$ in the system as an independent parameter is to add or remove heat (allowing that we have no "other work"). The process is specified as being adiabatic. No heat flows.

Conclusion: This process is not a process. It indicates a system at static mechanical state of $p, V, T$, presumably in equilibrium with its surroundings at the same $p, T$ (based on the term "reversible").

By default, when we state the word "pressure", it is first understood to represent the pressure of the surroundings. In this case, an irreversible, constant external pressure, adiabatic process is well-represented in undergraduate textbooks on thermodynamics. The first law formulation collapses as below.

Suppose instead that you want to consider an irreversible, adiabatic process with a constant pressure $p$ in the system. In this case, we revert to the ground rule that $p, V, T$ have a defining mechanical EoS for any substance. Holding $p$ constant, the only way to change $V$ as the independent variable is to change $T$ as the one remaining dependent variable. The only way for us to change $T$ to see correspondingly what happens to $V$ is to add or remove heat (when we have no "other work"). This is true regardless of whether the heat is added/removed reversibly or irreversibly. Since the process is also to be adiabatic, no heat flows in/out of the system. Therefore, the $T$ in the system also cannot/does not change.

Conclusions: The process is one of two kinds. Either it is a basic case of expansion/contraction with constant pressure in the surroundings under adiabatic conditions. Or it is not a process, simply a definition again of a static system. The term irreversible in the second case does not give us some hoped-for clever way out of the fundamentals.

When we allow other work, such as electrical or photonic (light) energy, to play a role, the above analysis is open to a different approach. We can heat a container with microwaves for example while having an irreversible, adiabatic, constant internal pressure process. In this case, the container volume will inevitably expand when the internal pressure is greater than the external pressure.

Not the answer you're looking for? Browse other questions tagged thermodynamics ideal-gas reversibility adiabatic or ask your own question.