Wouldn't Gravity Collapse the Wave Function so that Neutrinos have Well-Defined Mass?

My question might be based on a confusion of what counts as a measurement... But anyway the flavour eigenstate of a neutrino is a superposition of mass eigenstates $v_1$ and $v_2$. This is given by:

Great, so we have a neutrino in a superposition of mass eigenstates. But, surely the existence of gravity would instantly collapse this superposition? I don't have a good enough grasp on general relativity to think in those terms, but consider a thought experiment: 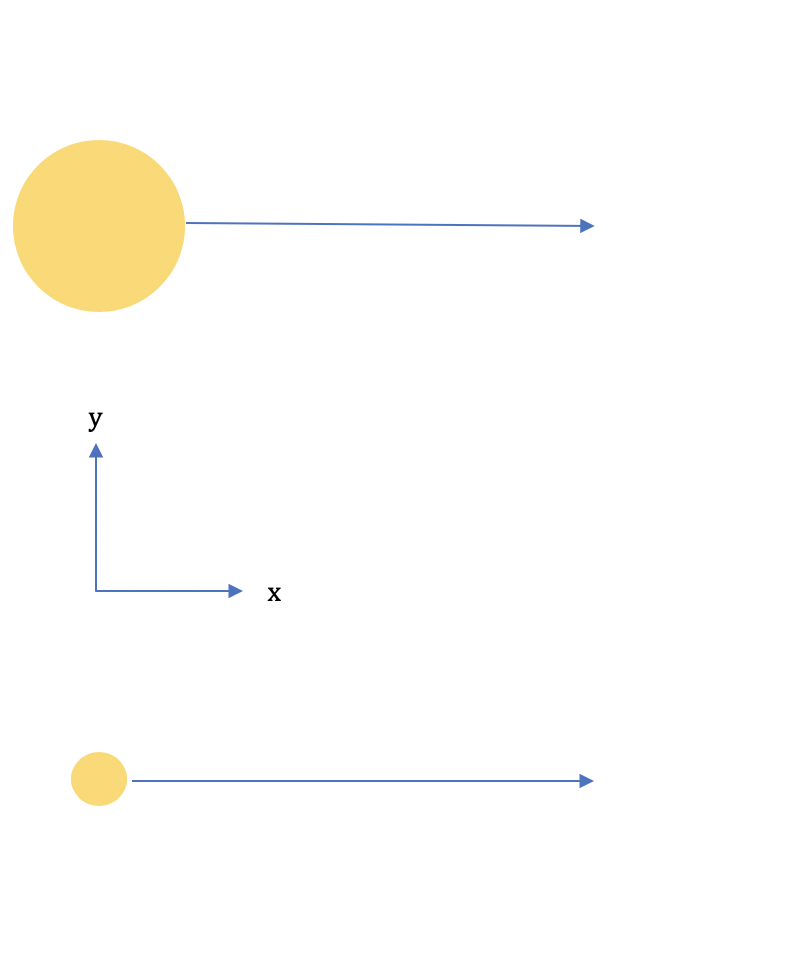 Imagine an electron and an electron neutrino moving in a vacuum in the $\hat{x}$ direction, spatially separated by 1km in $\hat{y}$, moving at the same speed in $\hat{x}$ (so from the perspective of the neutrino, the electron is at rest in $\hat{x}$). Assuming these particles interact gravitationally (can I assume that?), the position along $\hat{y}$ where we would have to place a detector to detect them both would be determined by the ratio of the particles' masses. So the point is, the mass of the neutrino would be "known" to gravity; the gravitational interaction would be determined by neutrino mass... doesn't this imply that any mass superposition is instantly collapsed by gravity?

I appreciate that this might be moving into quantum gravity territory, but how do physicists reconcile mass superpositions with gravity?

I'll give a quantitative estimate, but my approach is a little hand-wavy, so think of this answer as a thoughtful guess instead of a reliable result.

[1] Mathematically, Newton's model of gravity is like a purely-attractive version of the Coulomb interaction, which is routinely used as an interaction between quantum objects.

[2] Newton's model captures the effects of gravity that we notice every day. We don't normally notice gravitational radiation.

Consider a neutrino propagating near some other object. (In the question, the other object is an electron.) Let $|m_1\rangle$ and $|m_2\rangle$ be two neutrino mass eigenstates, and consider the initial state $$ \newcommand{\ra}{\rangle} a|m_1,E\ra + b|m_2,E\ra \tag{1} $$ where $|E\ra$ is the state of the other object. In the Schrödinger picture, the neutrino's gravitational influence causes the state of the other object to change, and the change depends on the neutrino's mass, so the resulting state is $$ a|m_1,E_1\ra + b|m_2,E_2\ra. \tag{2} $$ The question is whether $|E_1\ra$ and $|E_2\ra$ become orthogonal to each other, and whether their orthogonality is practically irreversible in the same sense that popping a balloon is practically irreversible. If so, then we can conclude that gravity will effectively measure the neutrino's mass, as proposed in the original question.

I'll try to estimate how long it would take for $|E_1\ra$ and $|E_2\ra$ to become orthogonal to each other, using this approach: The other object falls (slightly!) under the influence of the neutrino's gravity, with an acceleration that depends on the neutrino's mass. Different neutrino masses $m_1$ and $m_2$ cause the object to fall different distances in any given amount of time. I'll try to estimate the time required for the distance-difference to be such that $|E_1\ra$ and $|E_2\ra$ are essentially orthogonal to each other.

Suppose the other object is an electron. Let $M$ be the electron's mass, and let $R$ be the distance between the electron and the neutrino. Suppose that they are propagating alongside each other indefinitely, as described in the question.

To give the idea a better chance, let's see what happens when the neutrino-to-electron distance $R$ is only the size of an atom: $R\sim 10^{-10}$ meter. Then the estimate (4) gives \begin{align*} t\sim 10^{7}\text{ seconds}. \tag{6} \end{align*} That's roughly some number of months. If the neutrino and electron manage to stay that close to each other for that long, then their gravitational interaction has a chance to eventually cause $|E_1\ra$ and $|E_2\ra$ to become orthogonal to each other — but that's only a necessary condition, not a sufficient condition. To work like an effective mass-measurement, the orthogonality needs to be practically irreversible, like popping a balloon, because only then can we safely apply the state-replacement rule, like we do after a deliberate measurement [3]. Unlike a balloon full of gas, a single electron is a simple entity (we call it an elementary particle!), so I'm not sure the neutrino's effect on a single electron is practically irreversible.

[3] This condition might be similar to what Ron Maimon had in mind in this answer and in the comments below it.

Result using the earth instead of an electron

To give the idea an even better chance, let's try a more complex object. What if the neutrino passes near the earth? Will this cause its mass to be effectively measured?

Let's model the earth as a collection of (many!) atoms. For this rough estimate, we can pretend the atoms are all identical. Most of the earth's mass comes from atomic nuclei instead of from electrons, and the nuclei are also localized much more tightly than the electrons, so let's model the earth as a collection of $N$ atomic nuclei. The most abundant element in the earth is probably iron (because of earth's core), so for estimation purposes let's take $M$ to be the mass of an iron nucleus, which is 56 grams per mole $\sim 10^{-19}$ kg. The number $N$ is then the mass of the earth divided by $M$, which gives $N\sim 10^{44}$. To give the idea the best possible chance of working, let's suppose that the width of the center-of-mass wavefunction each iron nucleus is comparable to its Compton wavelength, which is $\sim 10^{-18}$ meter (much less than the radius of a proton).

Since $N$ is so large, the whole-earth states $|E_1\ra$ and $|E_2\ra$ can be orthogonal to each other even if the displacement between them is much less than the Compton wavelength of a single atomic nucleus — in other words, even if the displacement is much too small to make the corresponding single-nucleus wavefunctions orthogonal to each other. To quantify this, we need to make an assumption about the shape of the single-nucleus wavefunction. Since we're talking about a displacement that is much less than the wavefunction's width, we might as well use a Gaussian wavefunction, because any reasonably-smooth wavefunction will likewise be approximately quadratic near the center. This makes the math doable, and the result [4] is that the whole-earth states $|E_1\ra$ and $|E_2\ra$ will be orthogonal to each other if the displacement $\delta x$ is $$ \delta x \sim\frac{1}{N^{1/2}}\,\frac{\hbar}{Mc}. \tag{7} $$ This changes equation (4a) to $$ t\sim \left(\frac{\hbar }{Gc\Delta m}\right)^{1/2} \frac{R}{N^{1/4}M^{1/2}} \tag{8} $$ where $M$ is the mass of one nucleus and $N$ is the number of nuclei. Using the values of $M$ and $N$ suggested above and using the radius of the earth for $R$ gives $$ t\sim 10^7\text{ seconds}, \tag{9} $$ which is again roughly some number of months. A neutrino moving close to the speed of light passes through/by the earth in only a fraction of a second, much less than months, so (9) says that the earth will not come anywhere close to effectively measuring the neutrino's mass. We tried to give the idea a fighting chance, but the answer still seems to be no.

[4] More detail: the squared-magnitude of the inner product between two otherwise-identical Gaussian wavefunctions, each with width $\sigma=\hbar/Mc$ but displaced from each other by $\delta x$, is $\sim \exp(- (\delta x)^2/2\sigma^2)$. If the whole-earth state is modeled as a tensor product of $N$ copies of such a wavefunction, then this gets raised to the $N$th power, so the overlap is $\sim \exp(-N (\delta x)^2/2\sigma^2)$. We need $\delta x$ to be large enough so that this is essentially zero, so the condition $\delta x\sim \sigma$ that was used to derive (4) gets replaced by the condition $\delta x\sim \sigma/\sqrt{N}$, which gives (8).

Not the answer you're looking for? Browse other questions tagged gravity mass neutrinos superposition or ask your own question.

4
Do we know whether the "electron" neutrino is lighter than the "muon" neutrino?
0
How are neutrino energy eigenstates different to the momentum eigenstates?
2
Neutrino mass limit from supernova data
3
If $U$ determines the mixing between fields and $U^*$ determines the mixing between states-Why?
2
What is a neutrino state if not a particle?
2
Why can't I use just two angles when considering three neutrino oscillation?
0
Can there be Neutrino and antineutrino oscillations?