Imagine a closed system with a black body and a black hole, where the black hole has a lower temperature. The black body will radiate heat and the BH will absorb that heat, gaining mass in the process. The obvious catch is that the BH's temperature is actually sinking as it's absorbing heat energy. Which means it can do this endlessly. Both objects are getting colder.

This seems deeply wrong to me and my admittedly limited understanding of thermodynamics. Which assumption is wrong? Also, is there some sort of equilibrium temperature?

I have to amend my initial comment: the fact that the black hole has negative heat capacity means that it is not guaranteed that an equilibrium is possible, but in a closed system, as is the case you specified, it is possible that equilibrium exists. As you'll see, this is a pretty rich problem.

You can simplify your setting by considering a black hole in a closed box, without the initial blackbody. Because the black hole will emit blackbody radiation itself, and that radiation will fill the box and bring it to some temperature, it ends up being an equivalent situation. The equilibrium conditions of this setup have been studied by Hawking (1) and Page (2), and by the standards of scientific papers both are pretty readable.

The first equation is the usual black hole temperature formula, and the second equation comes from the blackbody radiation formula one learns in undergraduate thermodynamics. Note that this depends on $V$, the volume of the box.

We can plot both of these to learn about the possible stable configurations. There are two possibilities, depending on $V$: 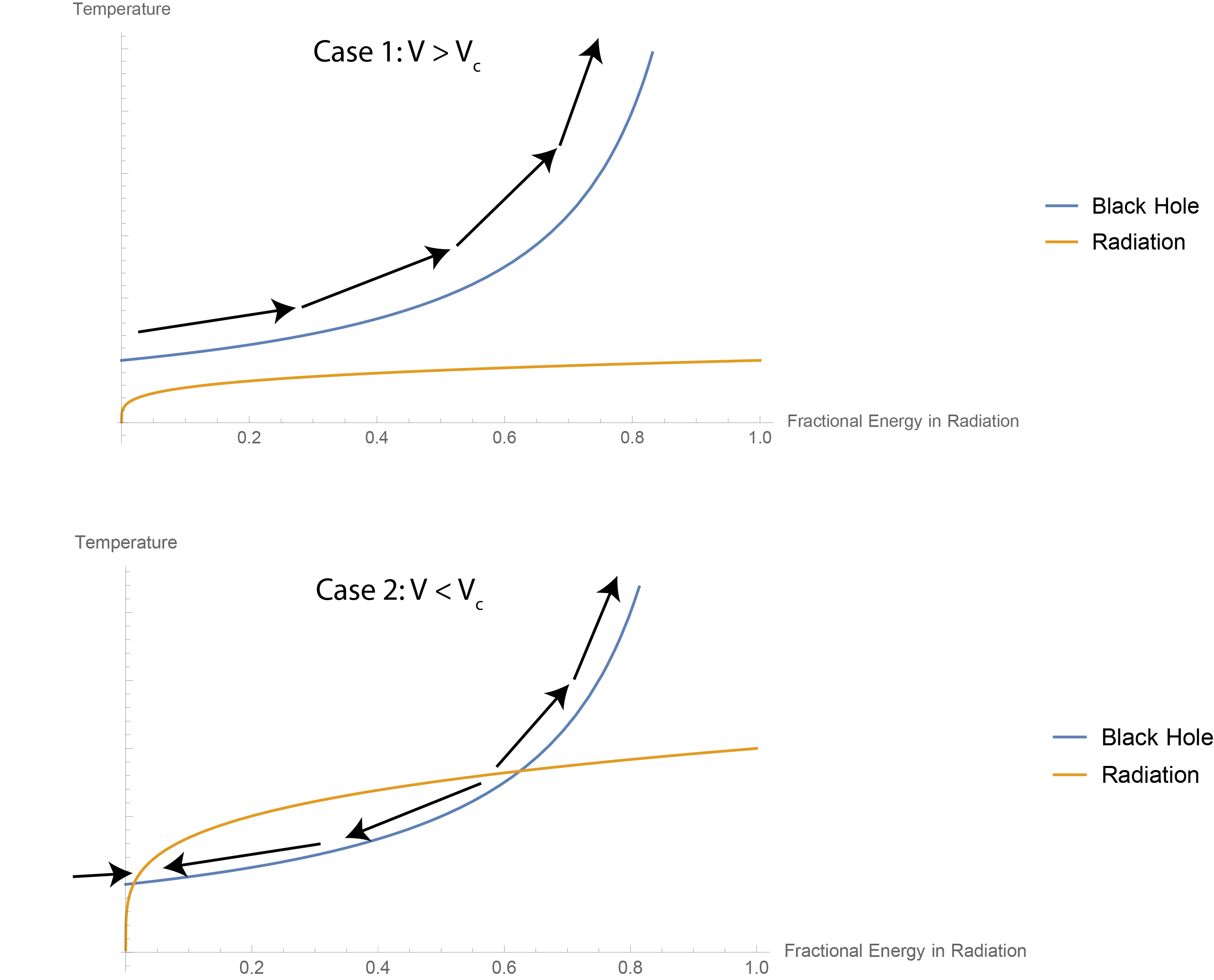 In case 1, for a large box, there is no stable equilibrium with a black hole, and the system always moves towards the black hole evaporating and leaving only radiation.

In case 2, for a small box, there is a stable equilibrium with the black hole and radiation, and also an unstable equilibrium. This corresponds to the situation originally asked by the OP: for example, imagine starting at x=0.4. So we can see that while the OP was correct that both systems initially get colder, because they do so at different rates this does not go on indefinitely.

For completeness, there is one more final possibility that I've ignored until now. If the initial energy density is very large, or the volume very small, the Schwartzchild radius of the system will be larger than V, meaning that when you form a black hole it is larger than the box itself. If this is the case, then this whole notion of an isolated black hole breaks down. This happens at $V_s=\frac{8 G^3 E_0^3}{c^{12}}$.

Edit: In response to Rob's question, one may look at the ratio $V_c/V_s$:

As a commenter points out, black holes (and all systems whose primary interaction is gravitational) have negative heat capacity. For classical gravitational systems you can tell that the heat capacity is negative from the virial theorem: the average kinetic energy of a gravitationally-bound particle has half the magnitude of its potential energy. Adding heat to a gravitationally-bound system sends its particles into higher orbits, where their speeds are slower; to the extent that temperature is related to mean particle speed, the object cools off. (A consequence of this is that when a dying star shifts from hydrogen burning to helium burning, its overall brightness increases, but its average temperature gets cooler: our yellow sun will turn into a brighter red giant, not a brighter blue giant.)

To observe that black holes also have negative heat capacity, simply note that adding energy to a black hole increases its mass, which decreases its Hawking temperature.

Negative heat capacities screw around with temperature-based ideas about thermal equilibrium. But the reason we talk about temperature is because temperature relates energy exchange and entropy exchange. If you're not sure how a system will evolve, you can always ask what pathway gives the largest increase in entropy. And there are several proofs that a black hole is a maximum-entropy state: if you have a system that contains a black hole and some other stuff (including other black holes), that system has less entropy than if everything ended up in the one black hole. That's what will happen, if you wait long enough.

A black hole is only a good heat sink if its horizon temperature is much lower than the background. Even then it is not perfect because it still emits Hawking radiation.

Case 1: The black hole cools, the black body cools faster. After some time both objects have the same temperature, which is the equilibrium temperature.

Not the answer you're looking for? Browse other questions tagged thermodynamics black-holes or ask your own question.

21
Explanation for negative specific heat capacities in stars?
35
How does one correctly interpret the behavior of the heat capacity of a charged black hole?
18
What's the most fundamental definition of temperature?
10
Why aren't we surrounded by Black holes?