If a photon truly goes through both slits, then why can't it make two dots (excite two atoms) in the screen? [duplicate]

There are a lot of questions on this site about the double slit experiment, none of them answer my question specifically. I am not asking about detection or detectors or anything just at the slit. My question is about the photons traveling as partial waves through both slits and the dots on the screen. A lot of the answers claim that:

That's why it goes through both slits.

Shooting a single photon through a double slit

How can we prove that a photon is absorbed only once?

Do photons interact only with single particles or can a single photon be absorbed by 2 or more particles simultaneously?

Yet if you think about it, if the photon travels as a wave, and partial waves travel through both slits, then these partial waves might reach and interact with the screen at different locations. 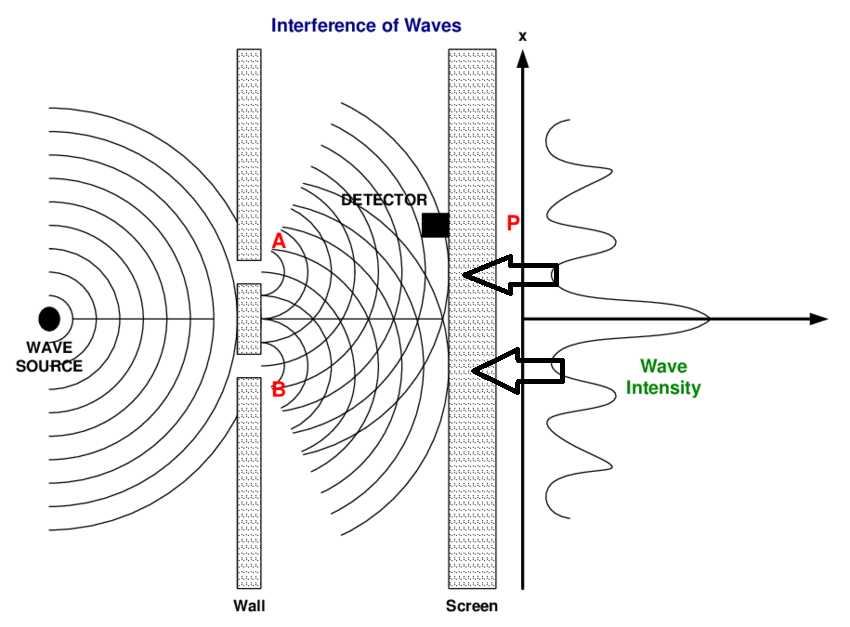 If you look at the image, you can clearly see a single photon shot at a time, traveling through both slits, as partial waves, and the partial waves reaching the screen at different (shown by two arrows) locations simultaneously. Why does this not leave two dots on the screen?

I believe your questions stems from the misunderstanding of quantum superposition and quantum measurement. First of all, you should understand that “photon goes through both slits” is a simplification – it uses words from classical physics to describe a non-classical phenomenon. I'll try to explain the subtlety here, but before that – to make sure we're both on the same page – let us explore the classical case.

Since you don't know the exact position and velocity of the rubber ball, you'd have to track every single point where the ball can be, assign it a probability maybe, and let those points evolve in time. If you understand how phase space works, you could assign a probability amplitude to each point in the rubber ball's phase space and evolve them in time. Then, if you wanted to compute the probability that the ball is in such and such volume, you'd just integrate over it.

Having constructed this analogy, let's forget the ball's actual trajectory (since we don't know it anyway). Instead, let's focus on the probabilistic description and try to answer several questions about it.

Our probabilistic description tells us the ball can be in either of many places, and when it hits the wall in the back, it can hit it on one point out of many. But can it hit the wall on two places at once? Of course not, it's just a single ball! If two boys were standing behind the slits, both boys could get hit with the same probability. But they would never get hit at the same time. If we include the boys into our probabilistic model, we can say that either one of them got hit, or that both got possibly hit, but we know they never got hit at the same time. A detail that will become important later: if one boy tells us he got hit, we know with certainty that the other didn't get hit.

All the phenomena I described in the classical analogy carry surprisingly well to the quantum case. Wavefunction is essentially just a probability distribution on the phase space (with several built-in limitations, like the uncertainty principle). There are just two crucial differences. The first difference is that in the classical analogy, there existed one actual trajectory, we just didn't know it. Meanwhile in the quantum case, a single trajectory simply doesn't exist and the probabilistic description is as close as we can get. I'll get to the second difference in a minute.

Now, equipped with a better intuition, let's try answering a few questions about the double-slit experiment. Assume we have a photon gun pointing at a plate with two slits and we measure where the photon lands using a second plate in the back.

The most natural answer is that it could have gone through either. It has gone through both slits with the same probability – same as the rubber ball.

No, it can't. It's the same as with the ball, one photon can't hit two places at once. However, an interesting thing can happen if we place two perfectly isolated atoms in the space behind the slits, let the photon pass and then try to test which atom got hit.

Same as with the boys – either could get hit. Either one of the atoms is excited by the photon. Both atoms got hit with the same probability, but both never got hit at the same time. And what's really curious: if we measure one of the atoms and find that it was excited by the photon, we know with certainty that the other atom wasn't excited. This is the famous entanglement – the state of one particle depends on the state of a different particle. In fact, a similar procedure called the Rydberg blockade is used to create entangled atoms in a lab.

Hopefully you now understand the analogy with classical physics and it isn't surprising to you that one photon cannot be detected on two places at once.

Now the second difference that I promissed. In the classical model, the probabilities of different outcomes could only add up. If there's a 20 % chance that the balls flies this way and ends here, and a 10 % chance it flies a different way and ends here, the probability of the ball ending here is 30 %. In the quantum case, the probability amplitudes aren't positive real numbers, they are actually complex. That means that probabilities of different outcomes can not only add up, but also cancel each other out. This is the reason why you see an interference pattern in the quantum case, but not in the classical one.

I know this answer is quite long already, there's just one elephant in this room that needs to be adressed. How do we know when to use the wavefunction description and when to resort to definite description? If somebody placed detectors in front of the two slits, even if they didn't tell us, the probabilistic description would fail and the interference pattern would be lost. It seems that in order to use the probabilistic description, the results must not only be unknown to you as an experimentator, but fundamentally unknowable.

This is called the measurement problem and there is a lot of interpretations and hypotheses about it. My personal favorite interpretation is the relational QM.

It helps if you think in terms of fields instead of particles, at least when it comes to photons. When you scale up the experiment and realize you can get the exact same interference patterns with rather giant multi-atom objects, this gets harder to hold a mental image of, but the fundamental answer of why you will only ever see a single mark on the detection plate corresponding to a single object entering your experiment is thanks to fundamental conservation laws (or symmetries, if you rather).

If you introduce one quanta of energy into the photon field, it's rather meaningless to speak of detecting "half a photon," because one photon is what's required to excite the electron in the atom in the photodetection plate that then changes energy levels and alerts you to its presence. Regardless of what story you want to tell about what the momentum/energy packet you're calling a photon does between emission and absorption, if you only put X amount of energy into the system, that's all you can get back out. This is reflected in a single mark on your detection plate corresponding to each photon emitted.

Put in enough energy for two photons to be created, and you'll see two marks downrange. Put in some more energy and you'll see some positrons and electrons as well. The fact that the counts all add up for Energy in/Energy out is guaranteed by the universal bookkeeping laws.

It's akin to sending a kid to a store with one dollar, in which no items in the store cost less than one dollar. They may wander around the store, pick up a few items to look at, take a few random paths through the aisles and loiter around for a bit... but since they only carry one dollar, they're only going to be able to walk out of the store with one item once they pay.

Once you're comfortable with that, you're still left with the fundamental question of what exactly is happening to quantum objects between the moment of emission and detection? for which you can insert your favored Interpretation of Quantum Mechanics since they all predict the same things.

This aspect of QM somehow remains mysterious to everyone.

There is however one interpretation of QM that helped me think of it in a logical and nautral way. It is a kind of "multi-universe" way of thinking Bohm-DeBroglie theory (it is closer in spirit to Madelung's fluid interpretation, the formalism is the same for both theories). You don't have to subscribe to it, but it may help to feel more at ease with QM logically. What follows is vulgarisation. To get into it, you need to study the Bohm-DeBroglie theory. Note that all these "interpretations" do not differ in terms of prediction from standard QM. They only help to forge an easier mental picture of the theory.

You can see the photon as going through both slits but in different universes. The wave is a cross-universe wave, it is not a wave in your universe. The photon is initially at the same place in all universes, but then it starts going into different directions in each universe. This sounds like a probabilist abstraction (several possibilities but actually only one really happens) but it is not. Because the different universes interact with each-other.

The photon is like a cross universe fluid, a kind of gas or liquid. Each universe contains a single particle (a photon "clone") of this gas. The particles in the gas kind of push eachother across universes. Even though this is formally a pressure, it does not work like an ordinary pressure. It's a bizarre way of pushing.

Note: what I explained is more accurate for a massive particle (like an electron). Photons are a bit special. But the logics is the same.

In each universe, the photon is detected at the slit it went through if you decide to detect it. But if you do so, the interference cannot happen.

How can we prove that a photon is absorbed only once?

This is somehow decoherence theory. After interraction with a macroscopic system, the photon cannot interfere with itself anymore. This can be interpreted as "in each universe, everything will happen like the photon was absorbed by a single atom".