There is a T-Shirt with this equation on it: 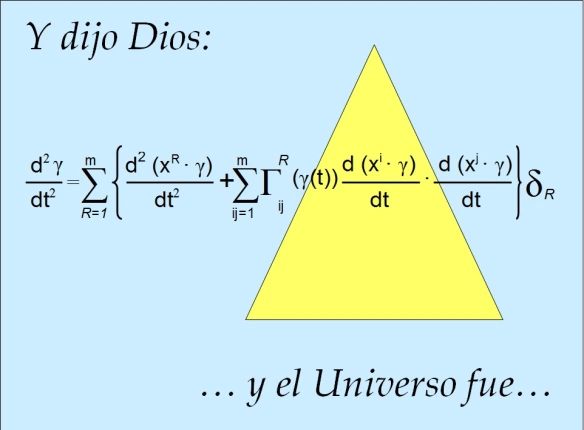 It looks like something related to General Relativity but I don't know what is it? Could you help me? Why the universe was ...?

$\gamma:\mathbb R\rightarrow M$ is a curve whose image lies in the spacetime $M$, so $\gamma(t)$ is the event at parameter value $t$ along the curve. $\gamma'(t) \in T_{\gamma(t)}M$ is the tangent vector to the curve at parameter value $t$, and $\gamma''(t)\in T_{\gamma(t)} M$ is the rate of change of this tangent vector with respect to the parameter $t$. If $M$ is a Lorentzian manifold and $\gamma$ a timelike curve parameterized by its arc length $t$ (which we would call the proper time), then $\gamma'(t)$ would be the 4-velocity and $\gamma''(t)$ the 4-acceleration.

The right-hand side is simply the expansion of $\gamma''(t)$ in coordinates $x^R:M\rightarrow \mathbb R$. What we would usually write as $x^R(t)$ is, strictly speaking, $(x^R \circ \gamma)(t)$. Presumably, $\delta_R$ is the unit vector in the $R$ direction, which we would typically write as $\frac{\partial}{\partial x^R}$.

Given the reference to a higher power, I would guess that the intended market for this shirt is people who have studied GR and want strangers on the street to be aware of that fact. It is perhaps ironic, therefore, that there's no actual physics on the shirt - it is simply the coordinate expression for the second derivative of a curve on a manifold-with-connection. My (cynical) best guess is that some marketing person googled "General Relativity formulas" and picked one they found impressive, but who can say for sure?

9
What does it mean for objects to follow the curvature of space?
42
Is topology of universe observable?
3
Are the Jacobi equation and the geodesic deviation equation related?
10
What does "finite but unbounded universe" mean?
1
What will the results be of this experiment to measure the trajectory of light?
3
Why would geodesics depend on velocity in general relativity?