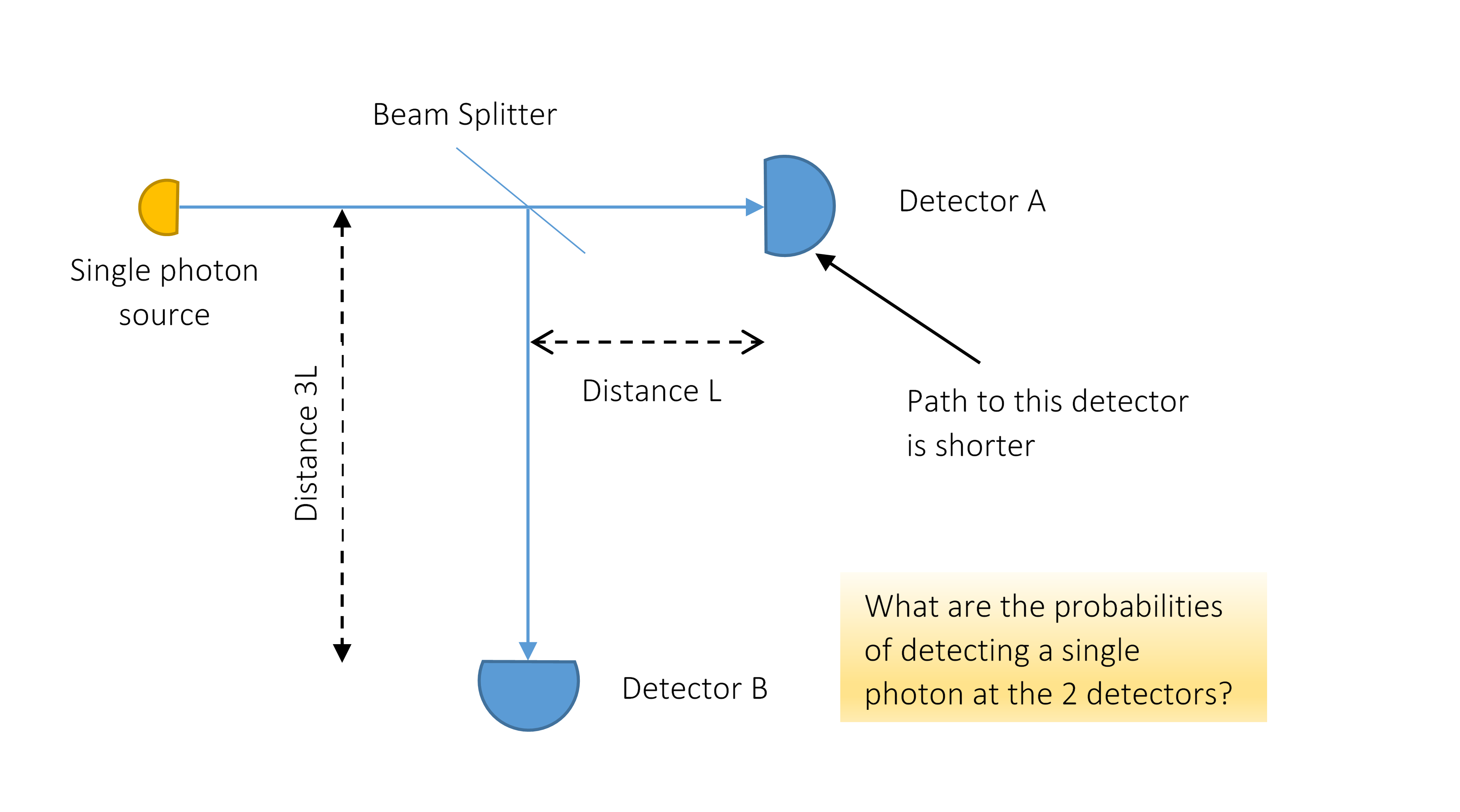 In short: the question is, does the length of the path affect the outcome of detecting a photon?

Consider the single photon beam splitter experiment. Does the probability of detecting the photon change if the distance between the detectors is unequal? Because light has a fixed velocity c. If the photon is detected at a place that is nearer (detection means absorption unless some special means are used), then it can no longer be anywhere else.

This might be the case in Wheeler's delayed choice experiment: http://www.sciencenews.org/pictures/112010/essay_delayed_zoom.gif As the particle detection path is shorter when that path is chosen, the photon will always be detected there?

If so, could temperature gradient on the detection plate cause unequal expansion of the plate on quantum scales affecting the outcome of detecting photon because the place where they reach on the plate first is different?

There is the basic confusion here, in my opinion, of the wave/particle identity.

When we speak of photons we are in the quantum mechanical regime, it is an elementary "particle". The quotation marks are necessary because it is not a particle like a billiard ball, and it is not a wave like an acoustic wave, or even a classical electromagnetic wave. It is a mathematically described "entity" which, depending on the experiment will act either like a billiard ball, i.e. a point in four dimensional space but with specific quantum numbers, (in the case of the photon spin , polarization and zero mass) or like a probability wave .

Probability wave in bold to emphasize that the energy of the entity when appearing as a wave is not distributed, as the energy in sound waves, in space. The entity will appear always with a specific (x,y,z,t) ( within the heisenberg uncertainty principle) but the probability of finding it there will display the properties of waves, interference patterns..

The experiment you are setting up does not have the ability to detect the wave nature of the probability distribution of the photon. If it is done in vacuum the distance will play no role to the efficiency of detection. It will take a little longer due to the velocity of light but the material of the detector will not make a difference: the photon will either be there or not.

In the delayed choice experiment the description makes the same mistake. The individual photon does not take both paths. The interference pattern appears because of the statistical accumulation of many photons which then display the probability wave aspect of the photon wave function. Each individual photon takes a specific path, but the probability of taking it is affected by the interference setup.

This is not an interference experiment (the paths are not combined). It is a setup to measure the two-photon correlation function (a Hanbury Brown-Twiss experiment). It measures $g^{(2)}(t=L/c,t'=3L/c)$ which is zero if the input state is a single-photon state.

Classically, if you had a source that sent light in all directions, in double the distance the light would spread out to four times the area. So the intensity would be 1/4 as much.

If both detectors are large enough that the photon will not miss, then I think you should get an equal probability that the photon is detected at either detector, regardless of the distance.

Remember that the beam-splitter has been calibrated. If it did not give an equal probability with the same distance, then it was adjusted until it did.

Not the answer you're looking for? Browse other questions tagged quantum-mechanics interference photons interferometry or ask your own question.