Would a force of friction exist in this situation?

I have studied that friction is due to breaking of molecular bonds between surfaces while they are in motion. In the case below, I feel that since there isn't any motion, there will be no frictional force. But when I asked my physics teacher he said that there would be a frictional force, but I don't see why. 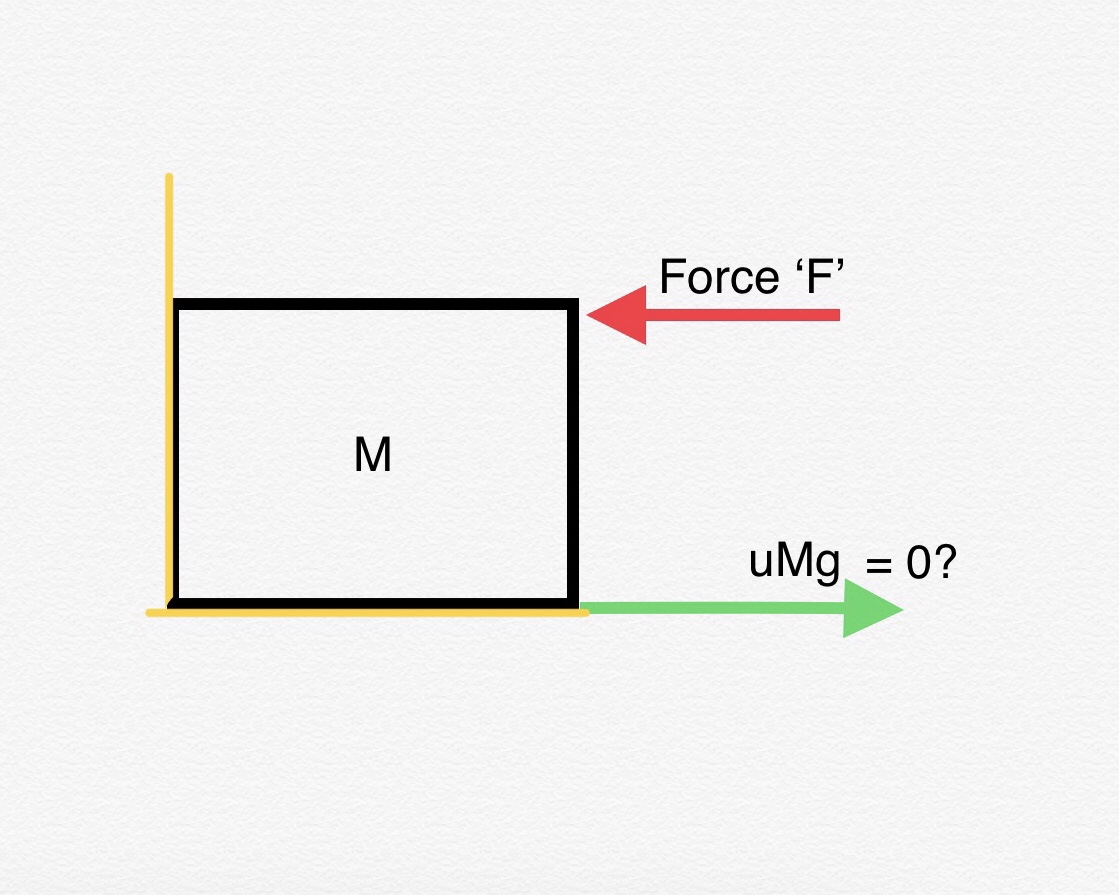 The yellow lines represent fixed walls, and u is the coefficient of friction. The block is being pushed against the fixed wall with a force F.

It's possible there is a frictional force, but it is not required. Imagine a block on an inclined plane, held in place solely by static friction. One could hold another block on the incline and slide it up toward the first block, taking more of the weight of the stationary block as it presses up against it. At some point, the entire weight of the block will be supported from below, and there will be no frictional force holding it in place.

TL; DR: The frictional force may exist in this scenario, but it's impossible to say whether it's equal and opposite to F, zero, or anywhere in between from the information given.

We know from experiment that friction occurs even when there is no relative motion between surfaces - this is called "static friction". So logically friction cannot be due solely to the breaking of molecular bonds between surfaces that are in motion relative to one another, because if it were then there would be no static friction. Also, if the molecular bonds between surfaces in contact were the sole cause of friction then we would see a measurable resistance when we lift one object off another one - and we do not observe that.

Static friction is due to microscopic roughness or asperity of surfaces - even surfaces that are polished to a mirror finish are not truly smooth at microscopic scales. However, this is an aspect of materials science that is not totally clear - Wikipedia says

The relationship between frictional interactions and asperity geometry is complex and poorly understood.

However, a good "test" to determine whether or not static friction is actually relied upon in the situation depicted, is to remove the wall and see if the object moves.

If this is a 'problem' based purely on newtonian mechanics, then NO, no frictional forces will act as there is no tendency, or even a possibility of the block to move relative to the surface, and that is exactly what is required for static friction.

What some others have mentioned, like @Manu , is that the little ridges in the surfaces will contribute to providing a contact force whose component parallel to surfaces will oppose the motion, hence, static friction. But this definition of friction is just not what is conventional when we define friction as $$F=\mu.N$$ In this definition, friction is a uniform, combined property of the two surfaces. We don't even go into the dynamics of the ridges on the microscopic scale, which is quite complex.

Therefore, if you really want to measure the frictional force in a real scenario, I would suggest placing a weighing machine(or some other normal force measuring device) between the block and the wall. This is because in the real scenario, a fraction of the force should be compensated by the ridges in the floor surface(as the little ridges act like individual systems, like individual walls), and the rest will be returned by the normal force from the rigid wall; thus equilibrium is still maintained.The only scenario that seems impossible to exist is the one where none of the applied force reaches the wall.

Not the answer you're looking for? Browse other questions tagged newtonian-mechanics classical-mechanics friction free-body-diagram or ask your own question.

23
Can the coefficient of static friction be less than that of kinetic friction?
1
Why is the force of Friction less than the force applied on the block in this situation?
2
Friction in absence of normal reaction(in the context of macroscopic picture)
0
Which acts first, friction or tension?
0
Friction Block-on Block
0
Would a block fall down if you hold it against a completely frictionless surface?
2
How does friction work?