If we lit a single fire that was fueled by a substance that burns at 500°F, then around that fire we lit directly against it another fire surrounding the original one. This second fire's fuel also burns at 500°F. Would the original fire increase in temperature? If yes, is there any topic related to this event that I can take to research it further?

In that case, I would think that making the fire larger (increasing the circumference of the fire) may increase the temperature of the burning surface and flames and the rate of burning of the fire (heat release) as follows:

The figure below is a simplified representation of a burning surface showing heat and mass transfers (based on the Drysdale fire protection textbook "Introduction to Fire Dynamics".) Part of the heat released in the combustion process is fed back to the burning surface to maintain the combustion process. Part of the heat released is lost to the atmosphere, $\dot Q_{atm}$. (a key to the other terms is given below, if you are interested).

A more detailed explanation of the figure is below. In particular I draw your attention to the last two equations. The first gives the heat release rate. The greater that rate the higher the burning temperature, all other things being equal. It is proportional to the mass burning rate.

According to Drysdale, "...the rate at which energy is released in a fire ($\dot Q_{c}$) is the most important single factor which characterizes its behavior"

The heat release rate ($\dot Q_{C}$) can be roughly related to the rate of burning $\dot m$ and the heat of combustion of the fuel by the following:

$x$ is a factor to account for incomplete combustion (<1.0) which is a function of the mixing of air drawn in from the surrounding atmosphere with the volatiles.

The rate of burning can, in turn, be expressed generally as

Where $L_{v}$ is the heat required to convert the fuel into volatiles. For a liquid, that would be the latent heat of vaporization. 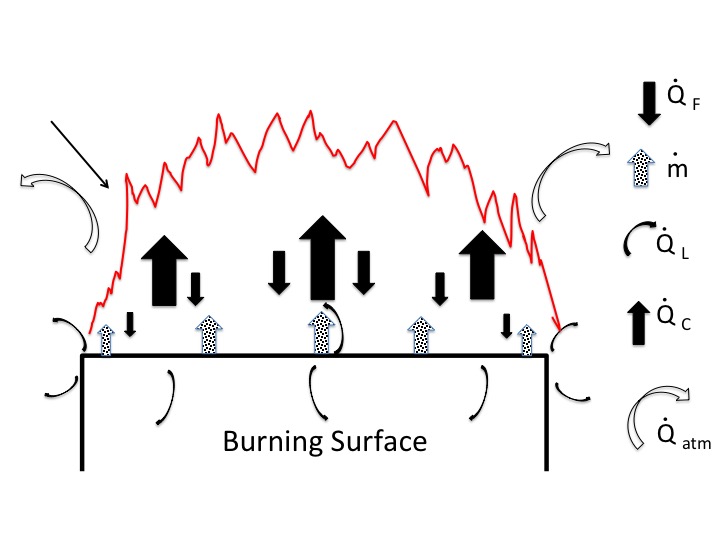 This second fire's fuel also burns at 500°F. Would the original fire increase in temperature?

The problem here is that neither fire is contained so that all energy generated can escape all the time. This is a problem we usually rectify, if we want to achieve the highest possible temperature, by running the fire in a enclosure known as a oven or furnace. Below is pictured a highly efficient reverberatory furnace (courtesy Wikipedia): 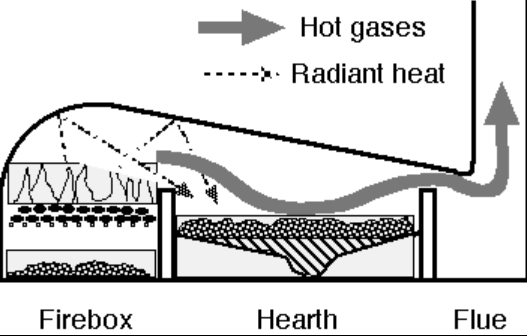 With containment higher temperatures can be achieved; with higher amounts of combustible and higher reaction rates due in turn to higher furnace temperatures.

Fire is an exothermic chemical reaction between one or more substances. As the input substances react and form the output substances, energy is released. Most of this energy will be in the form of heat.

This heat is at first concentrated in the reaction products. Some of the heat will be used to do work, providing a draft. Some will be radiated to everything around it, but in an open fire, most of it will remain in the combustion products, flying off into the sky.

To concentrate the heat produced, you want a reaction between your fuel and somewhere near the stoichiometrically optimal amount of oxygen. However, unless you have a bottle of oxygen lying around, you'll also be bringing in a lot of nitrogen, about four times as much as the oxygen you needed. If your fuel is wet, you'll also be spending a lot of your heat on vaporizing the water. Similarly, as you heat wood, you will spend part of the heat pyrolyzing it, driving off combustible gases while leaving charcoal behind.

So, to get the hottest flame you can, you will want to do the following things, in a rough order.

To answer your actual question: a bigger fire does not necessarily burn hotter, but it will insulate the center of the fire from the cold not-fire surrounding it, and it will serve to do many of the things stated above. There are definitely limits though, if you don't use excessive technological tricks to work around them. (if you use a wood-fired power plant to power a plasma generator, did your fire burn at 10 kilokelvin?)

Several answers have mentioned how multiple fires can supply heat to each other, but that isn't the most significant mutual heating effect.

The most important factor is the oxygen supply, which under certain conditions can be greatly increased beyond a critical level, creating a firestorm:

A firestorm is created as a result of the stack effect as the heat of the original fire draws in more and more of the surrounding air. … As the updraft mushrooms, strong inwardly-directed gusty winds develop around the fire, supplying it with additional air. … The greater draft of a firestorm draws in greater quantities of oxygen, which significantly increases combustion, thereby also substantially increasing the production of heat. The intense heat of a firestorm manifests largely as radiated heat (infrared radiation), which may ignite flammable material at a distance ahead of the fire itself. This also serves to expand the area and the intensity of the firestorm. Violent, erratic wind drafts suck movables into the fire and as is observed with all intense conflagrations, radiated heat from the fire can melt asphalt, some metals, and glass, and turn street tarmac into flammable hot liquid. The very high temperatures ignite anything that might possibly burn, until the firestorm runs low on fuel. — Firestorm - Wikipedia Anyone with a log burner will tell you that two logs burn hotter and more fiercely than one. It makes sense that twice the fuel would produce twice the energy, but there is more going on than that.

What appears to happen is that some of the heat radiated by one log is absorbed by the other and vice-versa, raising the temperature of the fuel and allowing it to burn more quickly, at least up to the limit of the oxygen available. The increased surface area is also a factor, and also possibly the increased airflow if the fire draws in more air.

Practically speaking, if you put one big log in the burner it can be difficult to maintain a fire. Placing two smaller logs is more effective, but if they are directly adjacent, not so much. Placing two logs with a gap between them usually results in a strong fire, especially if they have flat surfaces facing each other. The airflow between them is a major factor (the gap is like a chimney), but it is clear that the heat from one log is helping maintain the fire in the other that might have otherwise gone out.

In forest fires, the effect known as a Firestorm appears to be related with the increase in airflow.

Depending on the distance between the fires, depletion of the oxygen content of air entering them, may well reduce the flame temperature of one or both.

I had the same issue to get higher degree with multiple flames, however above answer about burning a log can be true but in lab-scaled situation it can be different. lack of oxygen between two flame is important to get the highest efficiency but its not all. if we assume A is our flame and B is a log and we want to burn the log, difference between temperature of A and B makes what we want in an exothermic reaction, energy is released because the total energy of the products is less than the total energy of the reactants then it means difference. so when you have no difference there will be no reaction, when there is two flame with exactly same degrees there will be no change because of no difference. in reality its not common to have two flames with constant temperature in a period of time so we can't do it while picnicking and whenever we use two flames we feel its warmer than one flames. maybe its better to discuss about multiple flames instead of a big flame

You may have some localized temperature increases due to air circulation... but it is the fuel that mostly determines the temperature of the flame.

Not the answer you're looking for? Browse other questions tagged thermodynamics temperature combustion or ask your own question.