How does a Foucault pendulum work?

How exactly does a Foucault pendulum work? The usual explanation says that the plane of the oscillation of the pendulum is fixed while the earth rotates underneath. On Wikipedia, there is a demonstration of this effect, showing what it's like on the north pole. But surely that can't be right, for this gets at the heart of the hovering helicopter argument, which says that a helicopter hovering above the surface could wait for its destination to arrive (because the earth rotates underneath). But as we know, this doesn't work because of conservation of momentum. So surely the same must apply to the Foucault pendulum?

Now, I suspect the phenomenon has something to do with the Coriolis effect, but I can't really understand how. Wouldn't the Coriolis force just be too miniscule? Also, what if we set the pendulum oscillating in the east-west direction (at some point on the northern hemisphere)? Then surely there will be no Coriolis force?

The statement "the plane of the oscillation of the pendulum is fixed while the earth rotates underneath." is applicable only for a polar pendulum. On every other latitude there is more going on.

The thing that has happened in those 24 hours is that the swinging pendulum bob has been exchanging momentum with the Earth. Of course, the change of momentum of the Earth is negligable, but that does not change the fact that exchange of momentum has taken place.

Indeed it appears as if this dynamic effect cannot be strong enough. Then again, it is cumulative, that makes all the difference


Now, most derivations that you will encounter do not describe the dynamics in these terms. Yet they arrive at the actually observed rate at which the plane of swing is precessing. How does that happen?

Well, generally derivations are constructed in reverse. The construction of the derivation works backwards from the known observation.
Then in the final write-up the derivation is presented in forward steps.
The derivation then contains assumptions that produce the desired result, and these assumptions look plausible, but they are not necessarily physically justified assumptions.


Next, let me take the case of the actual Foucault pendulum in the Pantheon. Foucault describes that on rare occasions there was time for long uninterrupted runs. Over the course of such a long run the amplitude of the swing would decay to a mere 10 centimeters, but Foucault reports that the plane of swing was still rotating at the same rate.

Two jobs
So: the suspending cable has two jobs to do: it must provide the required centripetal force to sustain circling the Earth's axis, and it provides the restoring force for the swinging motion.

Interestingly, to a very acceptable approximation the rotation-of-Earth-effect is equally strong in every direction of the plane of swing.

The image below gives a schematic presentation of the cumulative effect. 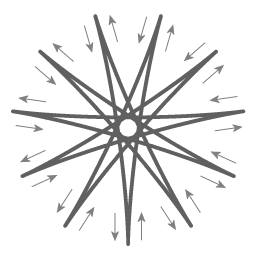 Yes, the point is Coriolis force. If you want to study the motion of the Foucault's pendulum you have to consider the fact that it oscilates in a non inertial frame, which is Earth's surface, so apparent forces have to be taken into account.

Wouldn't the Coriolis force just be too miniscule?

If you want to restrict your study to few oscilations, then it's definitely minuscle, and you can set it to zero, but you want to go beyond this approximation and explain why the oscilation plane rotates, then the Coriolis force is the first order perturbation you have to account for.

what if we set the pendulum oscillating in the east-west direction (at some point on the northern hemisphere)? Then surely there will be no Coriolis force?

1
Is the time for a complete rotation of the plane of swing of a Foucault pendulum only a function of latitude?